Weighing in on the Sheriff`s race: Why is Tommy Thompson urging Republicans to vote Democratic?

Weighing in on the Sheriff`s race: Why is Tommy Thompson urging Republicans to vote Democratic?

MILWAUKEE COUNTY (WITI) -- Wisconsin's most recognizable Republican is weighing in on the Democratic primary election race for Milwaukee County Sheriff. Former governor Tommy Thompson is suggesting Republican voters forget about the Republican races in Tuesday's primary election -- and instead, vote for incumbent David Clarke in the Sheriff's race.

Tommy Thompson has issued a letter to Milwaukee County Republicans -- and Mordecai Lee, professor of governmental affairs at UW-Milwaukee calls it "a curious one."

"Here is this very odd situation where a well-known Republican governor is saying to his Republican constituency: 'don't vote Republican,'" Lee said.

In the letter, Thompson talks about his admiration for politicians who follow their own conviction.

He goes on to say: "Help him on August 12th by cross-over voting in the Democratic primary election." 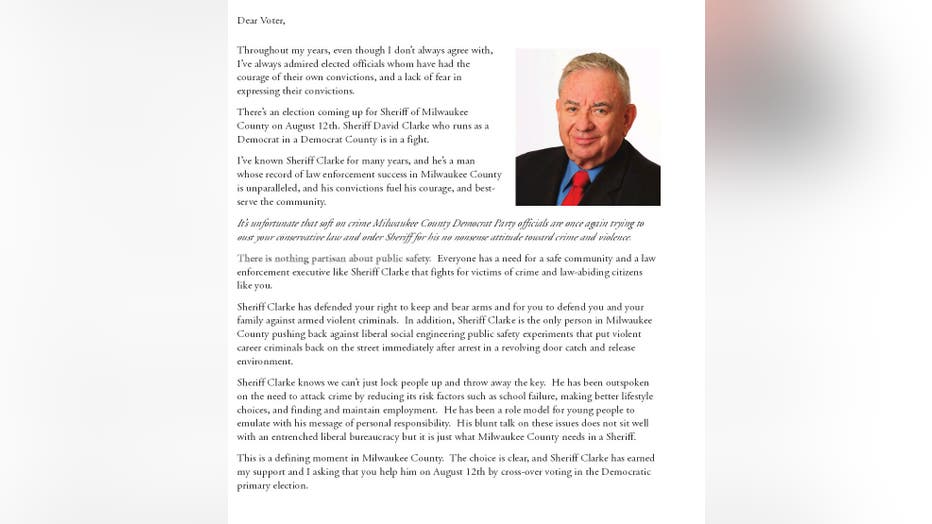 "In Milwaukee County, the real marquee race is the Democratic primary -- so here you've got a Republican governor urging traditional Republican voters to forget about (Tuesday)'s Republican primary and instead in a sense, save their guy," Lee said.

Lee says nothing about Thompson's letter is unethical. Wisconsin voters are allowed to choose who they want to vote for without having to change their party affiliation. What Lee is curious about is how many people actually got the letter.

"Here you've got Tommy Thompson on paper with his signature saying 'please don't vote in the Republican primary.' Wow. I don't think I've ever seen that!" Lee said.

Four years ago, Clarke defeated Chris Moews in the Democratic primary by a margin of six percent. Not a narrow victory, but certainly not a landslide.

The following is Chris Moews’ biography, as posted on his website: MoewsForSheriff.com:

Chris Moews (pronounced “Mays”) is a lieutenant with the Milwaukee Police Department. Currently he is the Executive Officer to the Captain at District 7. Prior to that he supervised a team of detectives in the North Investigations Division, investigating, solving and working to prevent violent crime. Under his leadership, his team had one of the highest crime-solving rates in the city. 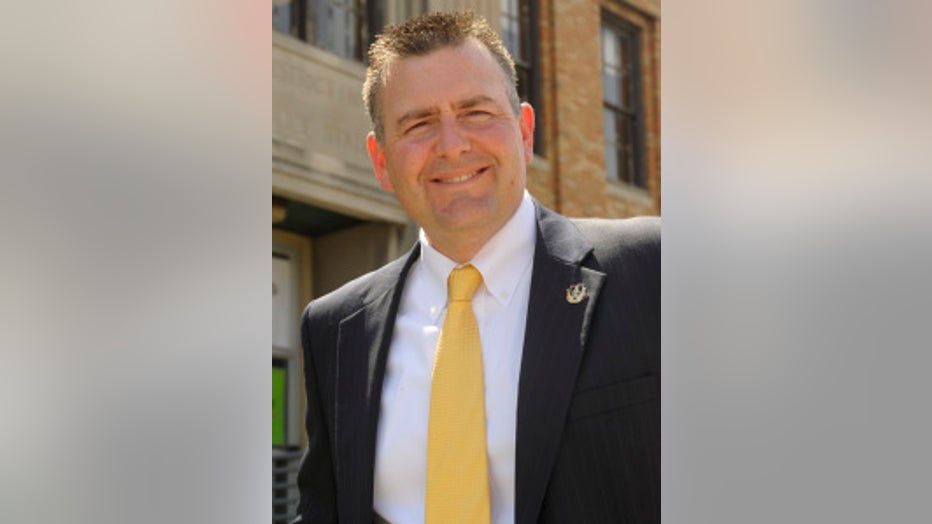 Moews has been a police officer for 20 years, and has earned numerous awards and recognition. He is a sought-after instructor, and commands a major incident response team. Moews currently serves as a board member of the Wisconsin Association of Homicide Investigators and previously served on the board of the Milwaukee Police Association.

Lt. Chris Moews is a lifelong resident of Milwaukee County. He and his wife, also a police officer, and their two children live in Milwaukee’s Jackson Park neighborhood. Moews graduated from Marquette University High School and holds a Bachelor’s of Science degree in Criminal Justice from UW-Milwaukee. The Moews family attends St. Alphonsus in Greendale, where Chris previously taught confirmation classes.

The following is Moews’ message to voters as posted on his website:

“I’m a lieutenant with the Milwaukee Police Department and I am running to be the next sheriff of Milwaukee County.

We need to have a professional law enforcement official that focuses on public safety, not politics.

The incumbent unfortunately has failed as a law enforcement officer, a steward of public dollars and a community role model.

We need a sheriff who is focused on countywide law enforcement issues. In addition to the ongoing task of managing the jail the Milwaukee County Sheriff’s Office provides courtroom security, community safety in parks and other public places, and executes our highway patrol. There are also a number of responsibilities that used to fall to the sheriff but have been lost in recent years.

The sheriff must play a productive role in witness protection, coordination of a smart, effective drug-interdiction strategy, and promotion of public policy that enhances smart policing.

Most importantly, as an elected official, the sheriff should conduct himself with the utmost dignity, and help facilitate cooperation between our urban and suburban law enforcement partners. And the sheriff should respect deputies, treating them as partners, not adversaries.

The incumbent has engaged in theatrics and grandstanding, chasing headlines and putting his own needs over the needs of the citizens he swore to protect. He’s bullied his officers. And he’s pushed an extreme political agenda instead of prioritizing public safety, alienating most Milwaukee County residents.

The following is Milwaukee County Sheriff David Clarke’s biography — as posted on the Sheriff’s Office’s website: 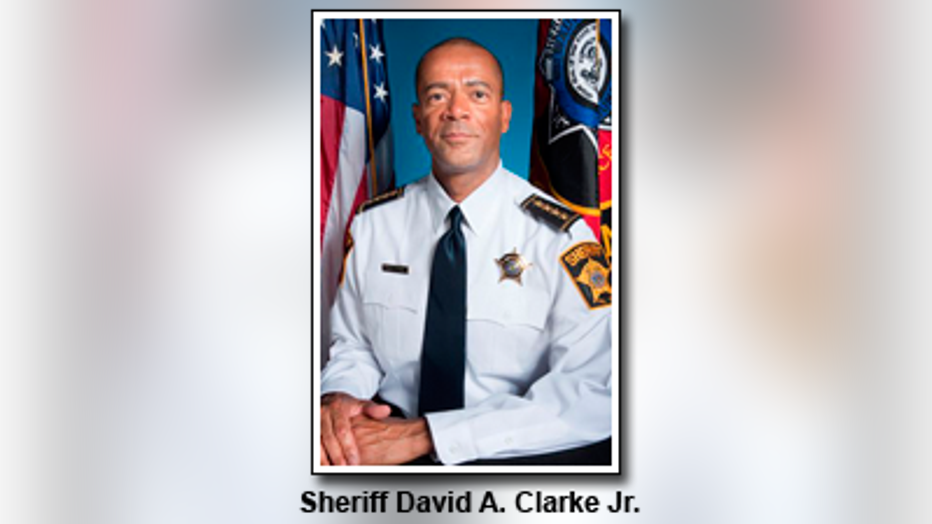 Clarke was promoted in 1992, to Lieutenant of Detectives and was assigned to the Criminal Investigation Bureau as Shift Commander of the Crimes Against Property Division, the Violent Crimes Unit, and again to the Homicide Division. In 1996, he was promoted to MPD’s command staff as Captain of Police, and soon became Commander of the Department’s First District, located in Milwaukee’s business and entertainment center. Clarke’s goal was to provide a safe environment for the district’s employees, tourists, and patrons of the arts, dining and nightlife.

In 1999, Clarke became Commanding Officer of MPD’s Intelligence Division. The Division was responsible for producing and sharing intelligence, and for providing dignitary protection in conjunction with the Secret Service, the Department of State, and other federal agencies. Clarke also served as the Department’s liaison with the United States Attorney as coordinator of the CEASEFIRE violent crime reduction program, and with the Federal Bureau of Investigation, Customs Service, the Bureau of Alcohol, Tobacco and Firearms, the Immigration and Naturalization Service, and the Wisconsin Department of Criminal Investigation.

Another big race in Tuesday’s primary election is for the Fourth Congressional District seat.

On Sunday, August 10th, Moore held a “get out the vote” event — a reminder that the primaries are this Tuesday.

Moore has served five terms in her position. Her opponent, Gary George served in Wisconsin’s Senate for more than a decade.

On Sunday, both talked about their positions.

“My number one goal would be to bring more federal funds back to Milwaukee to help us create jobs, and I will have a sense of urgency to do that. A job will help the gun problems. A job will help with the education issues. A job that will help hold families together,” George said.

“If we’re gonna have an alternate system, then we need to add more money to the pot and not have it make an impact on Milwaukee Public Schools — and I also think that it’s really important to not re-segregate our schools — not to have voucher schools at the expense of all our children,” Moore said.