MANITOU ISLANDS, Mich. -- A team of shipwreck hunters that includes members from Milwaukee uncovered what appears to be one of the most intact wooden schooners ever discovered at the bottom of the Great Lakes.  The amazing find was made almost on accident, and the discovery sparked a months-long mission to identify the vessel and solve the mystery of what happened to her crew.

"This particular story starts out with a family trip," said Ross Richardson, a Michigan native. "My cousins were visiting from Georgia, and they wanted to go to South Manitou Island." 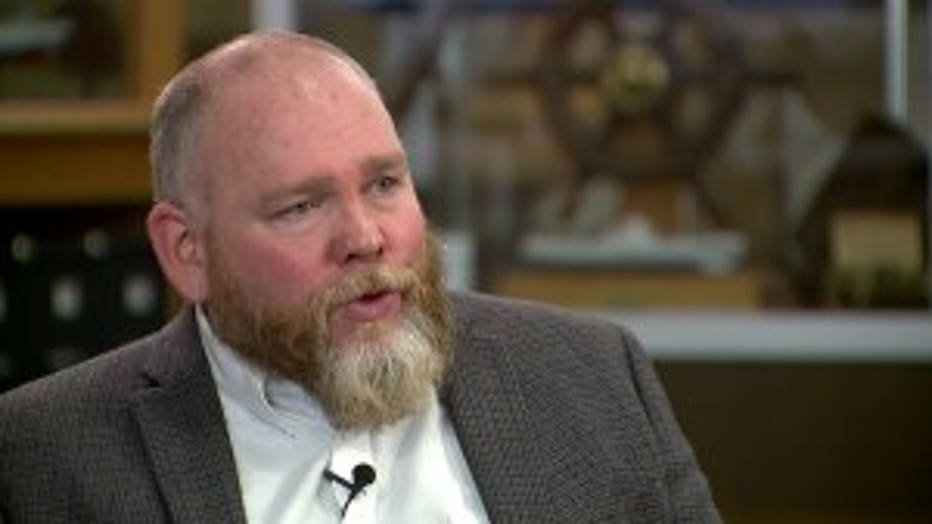 Richardson, who lives near the Manitou Islands, has spent countless hours searching for lost ships in the Great Lakes, however, he was not expecting to find anything when he decided to show off his equipment to family members.

"They were like, 'We get to see some shipwreck hunting,' not realizing how boring it is, you know?" said Richardson. "Ten hours looking at a computer screen, but I said, 'On the way out to the island, we'll put the fish in the water, and we'll kind of look around.'"

Sure enough, the sonar equipment got a positive hit almost instantly.

"After about five minutes, we ran over a small target," said Richardson. "It wasn't big, but knew it was something worth looking at. A week later, I stopped by the site again on the way out to the island again, with different family members, and I ran the sonar, and got a little more imagery, and something significant happened, and something was ringing off the sonar 90 feet off the bottom." 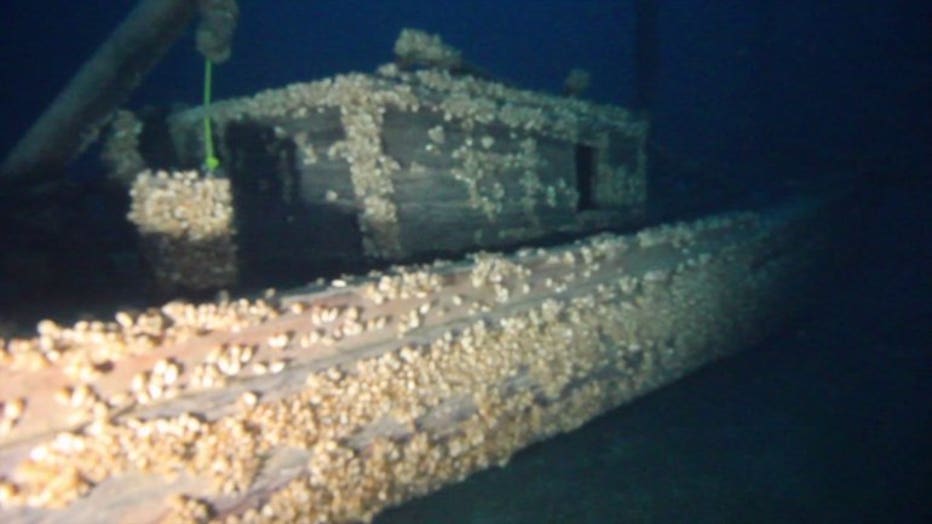 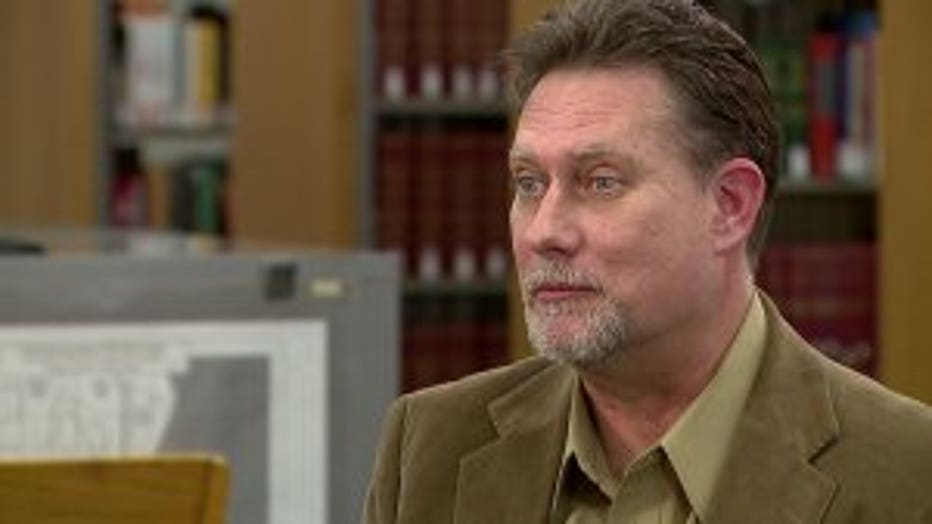 Richardson sent those images back to Milwaukee, where divers Steve Wimer and Cal Kothrade thought what was on their screens looked promising.

However, the veteran shipwreck hunters have been fooled before.

"I don't know how many times we've gone, 'It's a wreck,' and you go down, and it's a rock or some other shape that looks like a shipwreck," said Wimer. 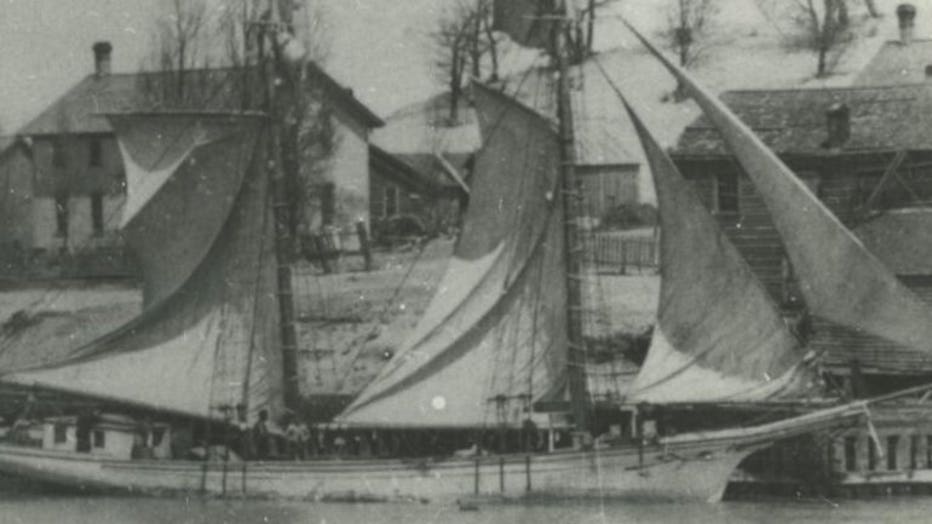 Wimer agreed to make the seven-hour drive to northern Michigan to join Richardson for a complicated dive. 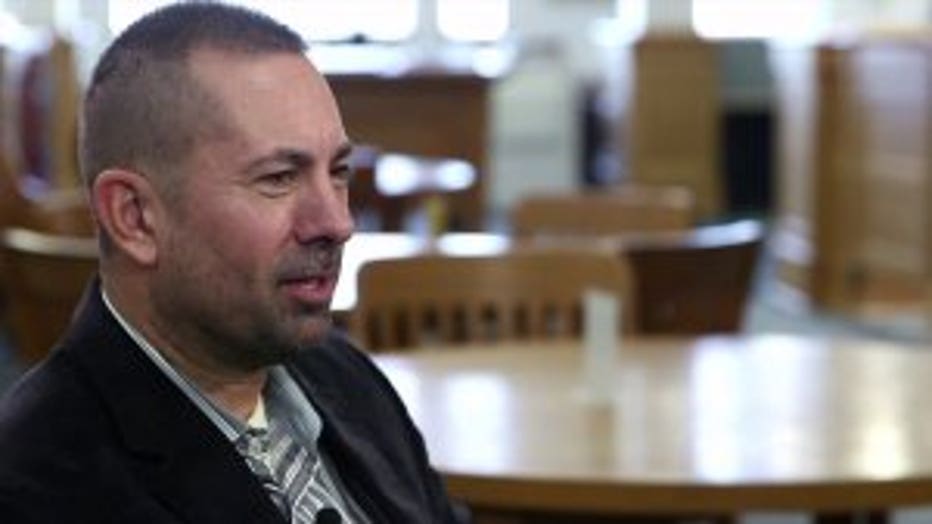 "Only a few divers in the entire Great Lakes could make this dive," said Richardson.

Wimer could not believe his eyes. With his camera recording, Wimer captured the wreck for the first time that appeared to show 90-foot masts still intact.  From the wheel to the cabin, planks and even hatches were all still in place.

Off the back of the ship, there was another rare find. 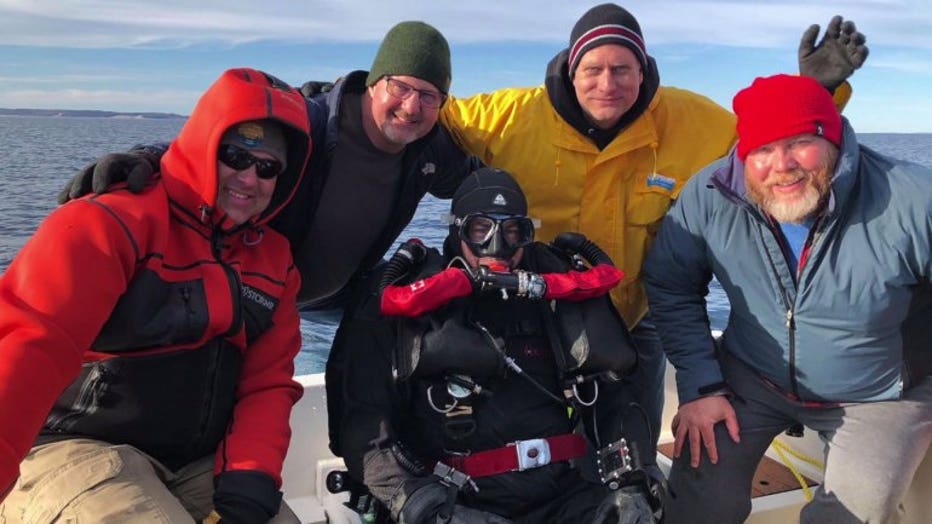 "When I saw the lifeboat, 'cause it is right off the stern of the ship, I was like, speechless," said Wimer. "I was like, 'This is amazing. I can't believe it.'"

The images were shared back on dry land.

"This is the most intact shipwreck I have ever seen," said Richardson. "It's just beautiful."

"Every picture I looked at that he kept sending me, he kept showing me more intact, and I'm like, 'Oh my goodness," added Kothrade. 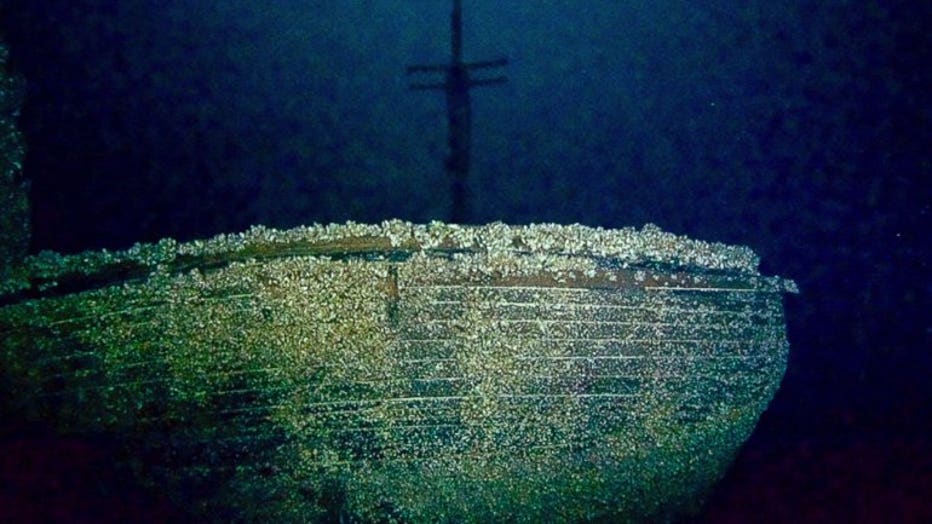 The incredible find led to even bigger questions.

"I'm a shipwreck nerd, so I study this," said Richardson. "This is what I do. When I have a chance, I go through old records, so I know about everything missing, and I knew there was nothing in the area that really matched this vessel, so I knew we had a real mystery."

There were hints, including a distinct shape in the front. 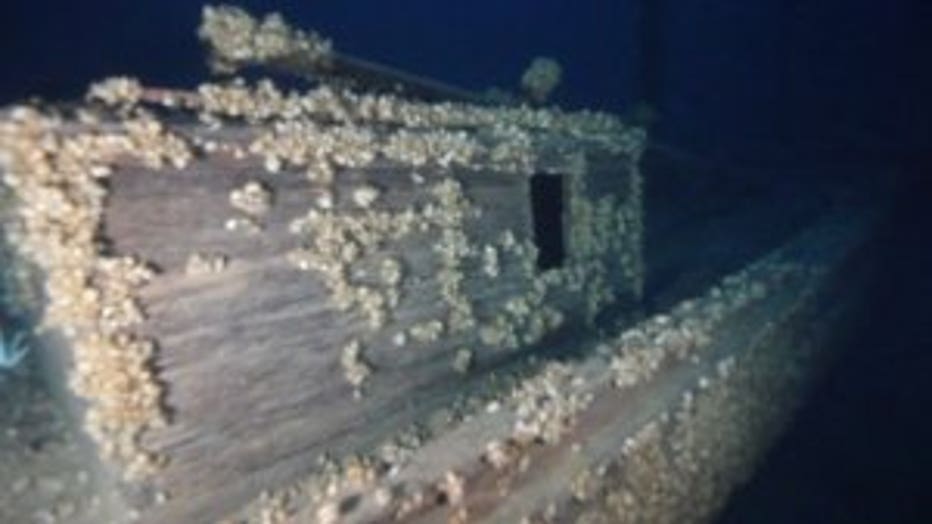 "We had a vessel here that probably had Wisconsin roots," said Richardson. "A lot of the clipper bows were made in Wisconsin and Manitowoc, so that is kind of a clue there."

Richardson spent the winter going over thousands of pages of documents.

The ship he discovered was the W.C. Kimbell. 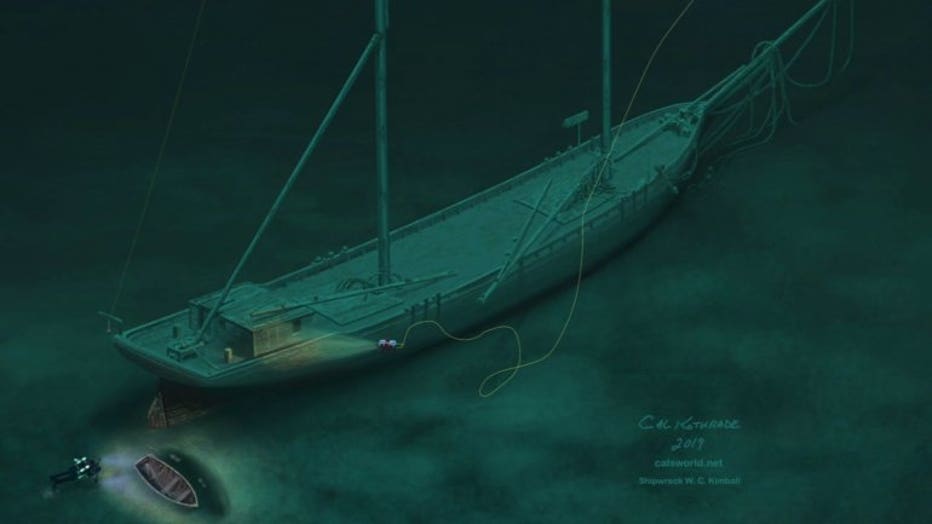 "It was built in 1888 in Manitowoc, Wisconsin," said Richardson. "It was sold to parties a year later in Northport, Michigan. It was traveling from Manistee with a load of salt. It had salt in the hull, and cedar shingles on the deck and they were heading to Northport and Traverse City to deliver these. They were shorthanded on the crew, but this journey would only be 50 miles, so I am sure they were thinking, 'We can make this -- a piece of cake.'"

While shipwreck hunters now had a name, they wondered why a perfectly intact wooden schooner was sitting on the bottom of Lake Michigan, and what happened to the four men who were aboard.

"A shipwreck...it's wrecked," said Richardson. "It's broken. This is not broken. It's perfect -- so what happened?"

"Usually, you'll see where a ship will dig in, or if it comes straight down, there is a ripple in the bottom," said Wimer. "Nothing. It was completely flat around the entire ship."

"This thing settled on the bottom like a feather, so that tells us that it was more than likely encased in ice," said Kothrade. 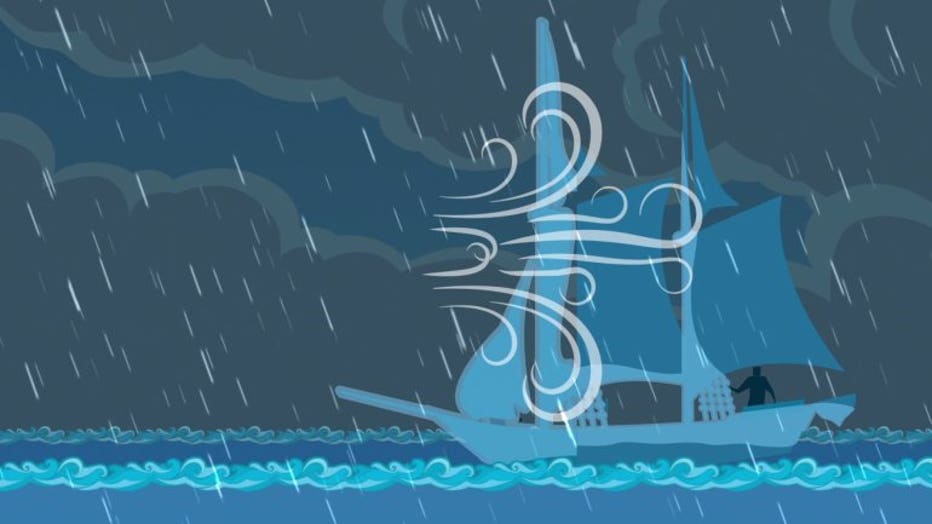 "The lifeboat was attached to the stern when it sank," said Richardson. "We know that by its location, even though the rope is rotted away and settled on the bottom, so they didn't even have time to even access the lifeboat."

The team now believes they know what happened.

"From that, we surmised an early spring gale can bring a lot of ice on a boat, and that is heavy, and makes it unseaworthy, and once it's submerged, now, it is starting to sink," said Kothrade.

"They probably lost the captain first, the head of the ship, and then, the first mate, after that, and then, the other two guys were very inexperienced, so one by one, they were washed overboard, leaving it a ghost ship," said Richardson. "Again, the lifeboat on the stern, that's pretty haunting because again, that's the first thing you're going to go to if your ship is sinking. I think it was frozen as a block of ice. It probably had two, three feet worth of ice on it, and it settled oh so gently. Maybe the ice kept it a bit buoyant."

For more than a century, the whereabouts of the W.C. Kimball was a mystery.  A discovery nearly made on accident may be one of the greatest finds ever discovered in Lake Michigan.

"It's been found, so it's not just forgotten," said Wimer.

"If you like good mysteries, this is the ultimate way of going through and solving good mysteries," said Richardson. "There is a purpose to what we do, and that is sharing the history."

The men credited the marine collection at the Milwaukee Public Library and the Wisconsin Marine Historical Society for helping them in their research.

Want to learn more about local shipwrecks or Milwaukee maritime history?  That information can be found on the WMHS website.

Video for this story was provided to FOX6 News courtesy of Ross Richardson and Steve Wimer.  ROV video of the shipwreck was captured and shared courtesy of Bryan Dort of Photic Zone.

Ross Richardson is a diver, author, and shipwreck hunter who is credited for several finds. To learn more about his work, CLICK HERE.

Cal Kothrade is an experienced diver, photographer, and artist whose renderings of the W.C. Kimbell were shared for this story.  To view more of his work, CLICK HERE.