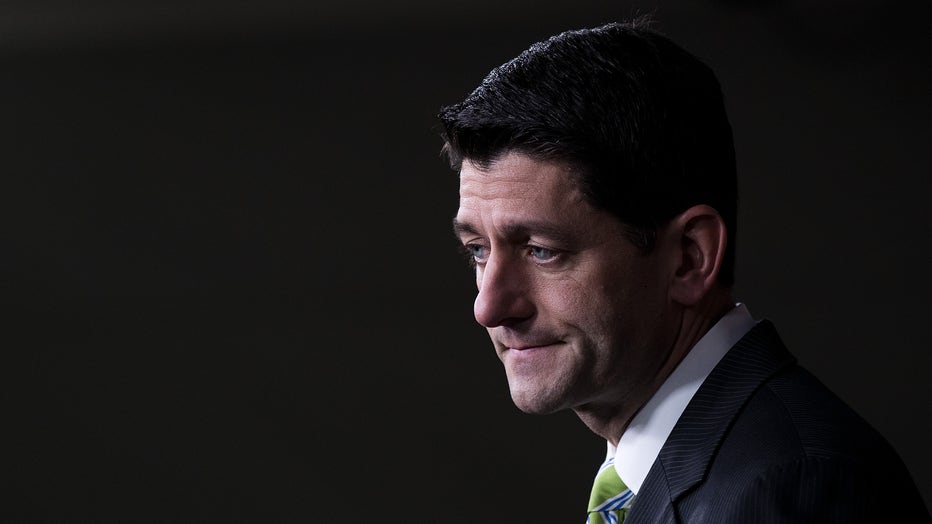 Speaker of the House Paul Ryan holds a news conference in the House Visitors Center on Friday after he cancelled a vote for the American Health Care Act, the GOP plan to repeal and replace the Affordable Care Act. (Photo by Drew Angerer/Getty Images)

‘Living with Obamacare for the foreseeable future’

After seven years of vowing to kill Obamacare, House Republicans on Friday abruptly withdrew their bill to repeal and replace the current health care law after determining they did not have enough support within their own party to pass it.

Speaker of the House Paul Ryan (R-Wis.) withdrew the party-devised American Health Care Act, dubbed Trumpcare, as representatives were debating it, nixing a vote scheduled for Friday afternoon. Earlier on Friday, Ryan had warned President Donald Trump that he did not have enough Republican votes to pass it.

If it had been passed, Trumpcare would have effectively ended the 2010 Affordable Care Act, popularly known as Obamacare, replacing its system of income-based subsidies with age-based tax credits and rolling back some of its regulations. Yanking the bill means Obamacare remains law.

“We’re going to be living with Obamacare for the foreseeable future,” Ryan said at a news conference Friday afternoon.

As the House debated the Republican legislation Friday, Pres. Trump called Ryan and asked him to stop debate before the vote, Ryan's spokeswoman said. He sent the House into recess shortly after the call.

A vote on Trumpcare was originally slated for Thursday — the seventh anniversary of the day Obamacare was signed into law — but House leaders pushed the date back when Pres. Trump failed to broker a deal with anti-Trumpcare conservative lawmakers.

The bill’s faltering comes after days of tense negotiations between the Trump administration and rebellious conservative lawmakers who refused to support the legislation as written.

Immediately after Ryan unveiled the Trumpcare plan on March 6, the House Freedom Caucus, a block of right-wing representatives, voiced their opposition. Some found it not conservative enough, insisting that the bill — which still called for some federal funding of health care — did not actually repeal Obamacare. One member, Rep. Justin Amash (R-Mich.), even called it “Obamacare 2.0.”

The Trump administration held multiple meetings with the Freedom Caucus, hoping to win them over. On Wednesday, administration officials suggested repealing Obamacare’s essential health benefit requirement — a regulation that forces all health insurance plans to cover some basic health benefits, such as maternity care, substance abuse treatment and pediatrics — as a compromise to woo more conservative members of the House into voting for the bill.

But the Freedom Caucus demanded more. Some reportedly asked for the bill to overturn more Obamacare regulations, like a popular provision that forbids insurers from denying coverage to people with preexisting conditions. Other members wanted the legislation to cut all federal health insurance spending.

Pointing the finger and moving on

The pulled bill is thought to be a major setback for Pres. Trump, who has prided himself on his deal-making skills and has boasted about how many of his campaign promises he’s kept since taking office. (All of those kept promises have been results of executive orders and memoranda, however, and not legislative votes.)

Pres. Trump had promised to gut Obamacare within his first 100 days in office. But even though the bill stalled after he failed to win conservative support, the president said its de facto failure is the Democrats’ fault.

Moments after the bill was pulled, Pres. Trump told the New York Times that he expected Obamacare to “explode” this year — meaning premiums will rise and more Americans will be unhappy with the law. When that happen, Democrats will be ready to make a bipartisan deal, he claimed. Such a deal may be a longshot: considering how many Democrats have vowed to protect Obamacare.

On Thursday, before the bill was pulled, Pres. Trump reportedly insisted that the House go through with the vote on Friday. Pres. Trump said he’d walk away from the Obamacare repeal plan if it didn’t pass and begin working on other legislative goals.

In his plan for his first 100 days in office, the president outlined nine other pieces of legislation he’d push for, including one bill to levy tariffs against companies that relocate their businesses to other countries and another that would establish a national school choice program.

In the meantime, Democrats celebrated the faltered bill as a victory for Obamacare.