In Mankato, Minnesota, Trump stepped up his rhetoric against Biden, calling him a “puppet of left-wing extremists trying to erase our borders, eliminate our police, indoctrinate our children, vilify our heroes, take away our energy." Speaking to a crowd of several hundred supporters outside an aircraft hangar, Trump alleged that a Biden victory would “replace American freedom with left-wing fascism.” 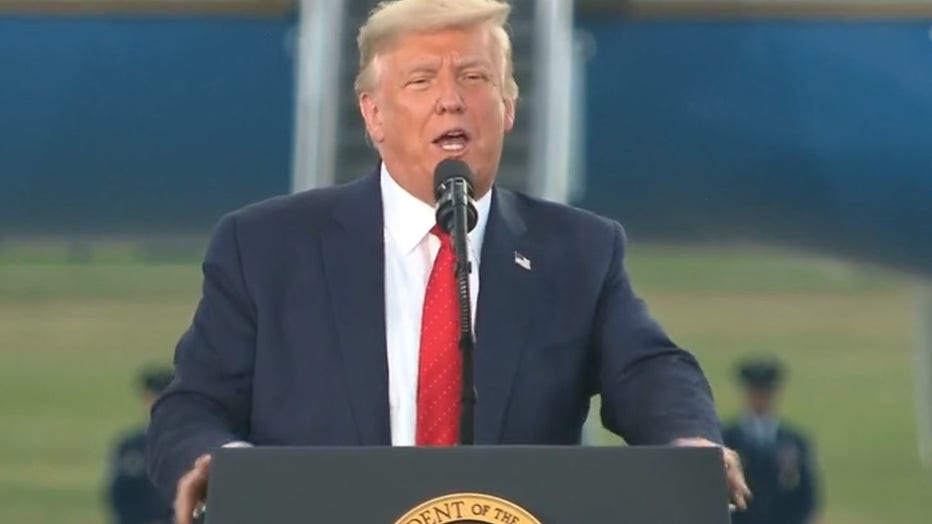 “Fascists. They are fascists,” Trump continued, though fascism is a form of far-right nationalism. "Some of them, not all of them, but some of them. But they're getting closer and closer. We have to win this election. But the proud people of Minnesota will not let this happen.”

Trump on Monday also visited Wisconsin — the official host state of the entirely virtual Democratic National Convention — to launch a week of travel and political events aiming to blunt the customary polling “bounce” that a candidate gets during their convention week. The president trails in both public and private surveys less than three months before Election Day.

Earlier in the day, Trump stopped in Minneapolis to hold an event with small-business owners whose stores were damaged after violent protests following the killing of George Floyd in police custody. 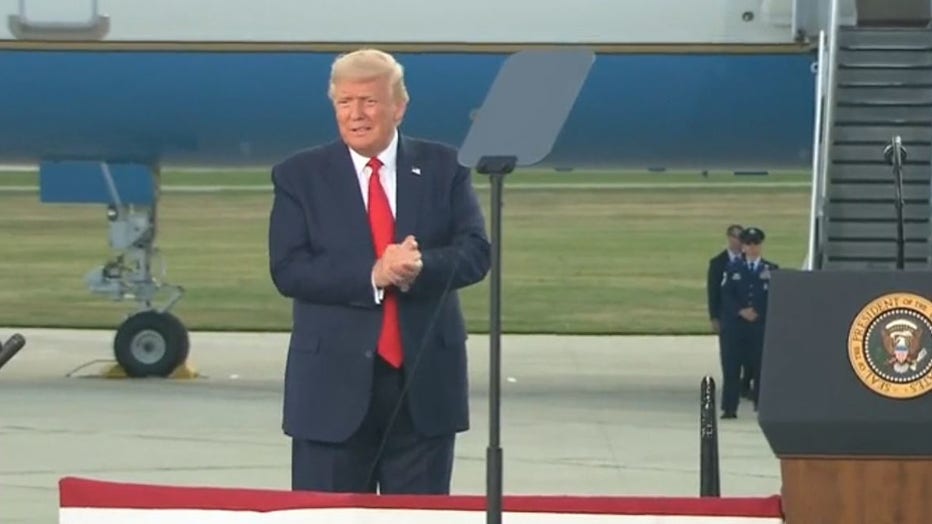 Minnesota Gov. Tim Walz, a Democrat, said the White House had been interested in Trump visiting the makeshift memorial in Minneapolis at the site of Floyd’s fatal encounter with police on Memorial Day.

“I spent this weekend trying to tell the White House why it was a really bad idea to have President Trump go down and stand at the George Floyd memorial and use (it) as a backdrop for his campaign and ignite the pain and the anguish that we’re feeling in Minnesota,” the governor said Monday during a virtual breakfast for the state’s delegation to the DNC.

White House chief of staff Mark Meadows disputed Walz’s statement. “Gov. Walz never reached out to me, nor the president, nor the campaign so perhaps he misspoke,” Meadows told The Associated Press. "We’ve communicated before, so he has our contact information.”

On the tarmac in Minneapolis, Trump addressed about 150 supporters — half of them wearing masks — who chanted “Four more years!” Trump told them that the Democrats would take away the constitutional amendment to bear arms, though Biden has said he will work to enact common-sense gun reforms.

Trump also criticized Biden for supporting an expansion in refugee asylum admissions, including from what the president termed “terrorist hot spots," an apparent reference to Minnesota's large community of Somali refugees.

“I’m going to be so politically correct," Trump said, before taking credit for his travel ban on some Muslim-majority countries, saying, “We want people to come into our country who love our country.”

In Wisconsin, which Trump won by less than 1 percentage point in 2016, the president said he's seeing more “spirit” now.

“You see, this is easier in a sense. Now, the virus made it a little bit more difficult, maybe a lot more difficult, because all of a sudden something happened that nobody ever even thought about," Trump said in Oshkosh at another airport hangar event. “But we handled it."

As Trump attacked Biden, his plans for his own convention next week were beginning to come into focus after the coronavirus scrapped in-person gatherings in Charlotte, North Carolina, and Jacksonville, Florida. Trump is set to accept the Republican nomination from the White House, with the Republican National Committee filing a permit application to launch fireworks from the National Mall to mark the occasion. A spokesperson said the application was pending.

Marking his heaviest week of political travel since the coronavirus put a stop to his campaign schedule and imperiled his reelection chances, Trump sharply criticized Biden's economic policies in the Upper Midwest battleground states.

On Tuesday, Trump will take on Biden over his immigration policies during a visit to Yuma, Arizona. He is also set to travel to Pennsylvania, the state of Biden's birth, on Thursday, ahead of the Democrat's acceptance speech.

Trump's aggressive push comes as his path to reelection has narrowed since the coronavirus hit, and he's been forced to play defense in the states that carried him to reelection four years ago. Minnesota, viewed as a GOP pickup opportunity a year ago, now appears to be slipping out of reach, Republicans say.

Wisconsin, a state that had voted for Democratic presidents for decades until Trump's 2016 victory, has emerged as one of the toughest battlegrounds of 2020. Vice President Mike Pence plans to visit the southern part of the state on Wednesday. Trump's campaign views the state's whiter, older demographics to be more favorable than Michigan, which Trump also won four years ago but is increasingly seen as a likely Democratic pickup.

Trump's campaign is seizing on Biden's decision — because of the coronavirus — not to travel to Milwaukee for the convention, accusing the Democrat “effectively abandoning” Wisconsin. The GOP is sending surrogates to the state this week in a show of force, including Pence and Republican National Committee Chair Ronna McDaniel.

Democrats are devoting resources to television ads and field organizing in the state. Biden and California Sen. Kamala Harris, his newly announced running mate, are set to deliver their convention addresses from Biden's home state of Delaware this week, mitigating the need for air travel.