Concern about prevailing wage among veterans

Concern about prevailing wage among veterans

MADISON — Wisconsin military veterans is warning lawmakers that repealing the state's prevailing wage law would cost many veterans who work in construction their jobs.

The Wisconsin American Legion, citing a study by the Midwest Economic Policy Institute, said 2,000 Wisconsin veterans could lose construction jobs if lawmakers do away with the law, which sets a minimum salary for construction workers on public projects.

"But don’t mistake that as an opportunity that we won’t fight. We will."

Gov. Scott Walker has proposed in his state budget to wipe out the rest of the law. Supporters of repeal say prevailing wage provisions waste taxpayer money and stunt job growth, while union groups argue that repealing the law would reduce wages and could lead to job loss.

"When we come back from our tour of duty in combat, we don’t want to fight here no more," said Leroy Miller, an Army veteran who lives in New Berlin and works for a hydro-excavating company. "But don’t mistake that as an opportunity that we won’t fight. We will." 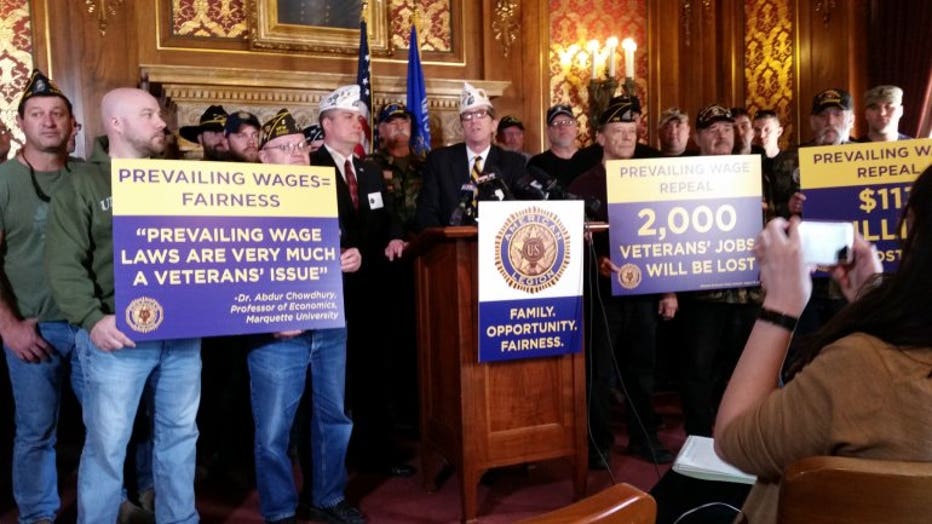 David Kurtz, a representative of the Wisconsin American Legion, said veterans disproportionately seek jobs in the construction industry after they leave active service.

In 2015, the Legislature eliminated the requirement for local projects, but kept it for state projects.

State Rep. Rob Hutton, one of the lead sponsors of the failed 2015 effort to fully repeal prevailing wage, said he expected lawmakers to keep Walker's provision in the budget and eliminate the rest of the law. The budget is the only bill that lawmakers must pass every two years, making it ideal for controversial legislation that might not pass on its own.

"We`re trying to open up opportunities for all employees and employers, including veterans, some of whom are represented by union organizations and others who are not," Hutton said.

Kurtz said the American Legion would be lobbying the Legislature about the budget provision.

"I know from my experience dealing with the governor that he has traditionally come on the right side of Wisconsin veterans."

"I'm not a statistician. I'm not an oddsmaker," Kurtz said. "I know from my experience dealing with the governor that he has traditionally come on the right side of Wisconsin veterans."

Miller did two tours in Afghanistan and said he struggled to find work after he got out of the military in 2009. A tough economy and a post-traumatic brain injury that left him having to relearn math added to his challenge.

Miller said he later received training through the Operating Engineers Local 139 and has been working in construction for more than two years.

"I wasn't just given this job. I had to fight for this job -- overseas, and when I came back," he said.