Wauwatosa city leaders met on Monday, Aug. 10 to discuss how to keep a suspended police officer safe in the wake of violent protests outside of his home.&nbsp;

WAUWATOSA - Wauwatosa city leaders met on Monday, Aug. 10 to discuss how to keep a suspended police officer safe in the wake of violent protests outside of his home.

Joseph Mensah is currently suspended from the department following an officer-involved shooting in February.

Investigators with Wauwatosa police canvassed the neighborhood near 100th and Vienna on Monday -- where a crowd of around 60 people gathered Saturday to confront Mensah. Neighbors told FOX6 News off-camera that dozens of cars began speeding up and down the street before protesters approached a home -- yelling and throwing toilet paper.

"It was frightening. It was, for a few minutes there, pretty scary," said one person. 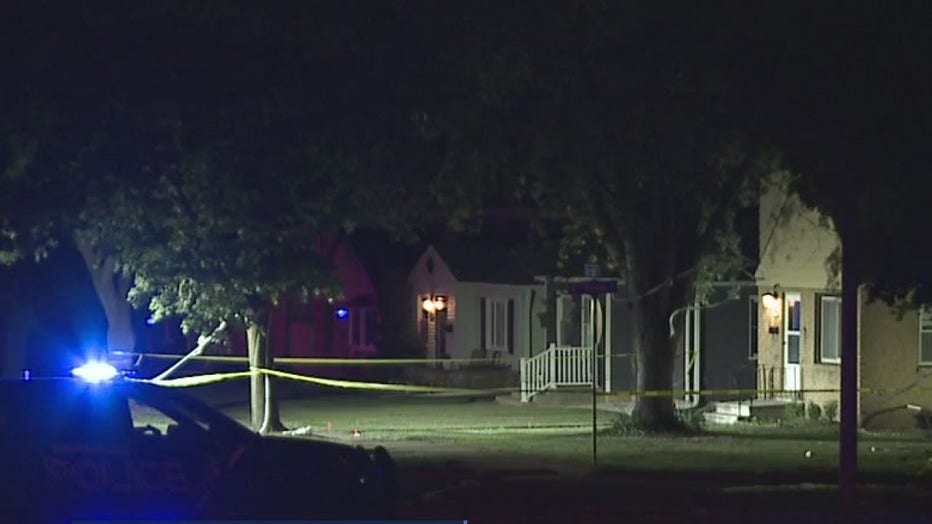 Police said Mensah came out of the house to try to talk to the group. When he did so, Mensah was assaulted and a single round from a shotgun was fired at the back door.

Mensah posted on social media after the shooting, writing, "The iron in all of this is that they chanted Black lives matter, but had zero regard for any of the Black children that live there or me, a Black man." 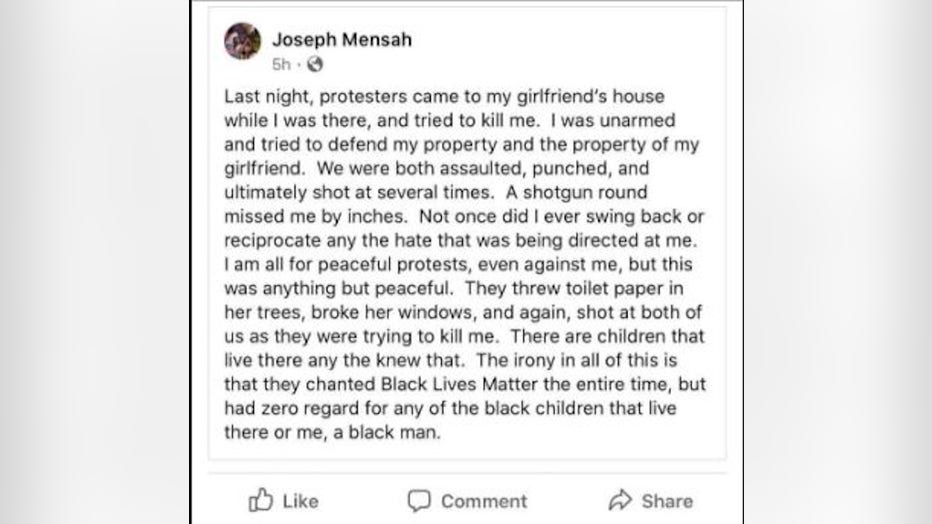 Mensah is on paid administrative leave after fatally shooting 17-year-old Alvin Cole in February. The case remains under review by the Milwaukee County District Attorney's Office. Mensah also killed two others in the line of duty -- both of those incidents were ruled justified.

The president of the Wauwatosa Peace Officers Association accused Wauwatosa Mayor Dennis McBridge and Common Council members of contributing to the violence that played out over the weekend.

In a statement, the mayor condemned the recent violence and said those responsible will be prosecuted if identified. Police called the incident an urgent priority.

“The attack on Wauwatosa Police officer Joseph Mensah cannot be justified. It was not a “protest.” It was an attempt to circumvent two ongoing investigations and insert vigilante justice targeting his family, his neighbors, and those that may support him. It was fueled by hate, not legitimate action for change.

“No one should be targeted for violence and intimidation because of the job they hold – whether they are police officers, teachers, nurses, or referees – anyone.

“Enough is enough. The mob must be stopped. You can see it happening. From legitimate peaceful marches to the demotion of Chief Morales to Saturday night’s actions, it’s evident. Every time the mob gets what it wants, it escalates, grows larger and more bold.

“Someone is going to get killed or seriously injured, and the cycle of violence will get worse. It must end. And leaders in the community – both elected and otherwise must say so and take action to end it. Their silence is deafening.”

“Saturday night a group of rioters followed through on weeks of threats and attacked a Wauwatosa Police Officer at his home. Though the protests of the last few weeks have been largely described as peaceful, a brief look at social media reveals multiple threats to find officers and their families at their homes.

“I proudly stand with the men and women of law enforcement who work to keep our communities safe and I call on the mayor and common council in Wauwatosa to work to bring peace and safety back to the community before events escalate any further.”