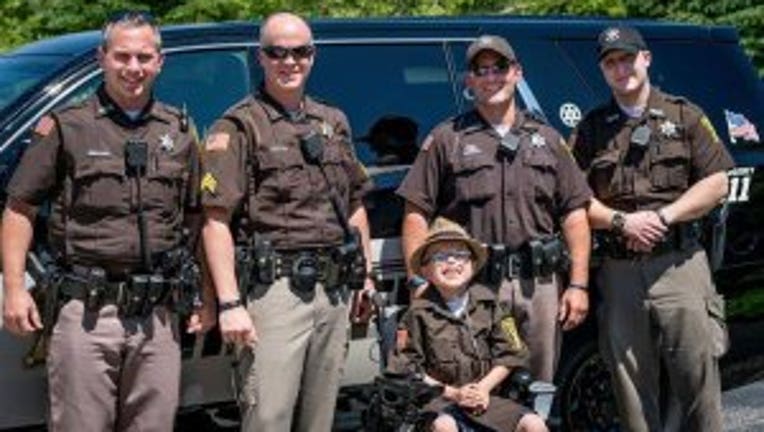 The boy in this story is Eli Morgan. A post on the Washington County Sheriff's Office Facebook page describes what happened next.

"He was turning 14 years old on June 14th so the family was celebrating his golden birthday on Saturday, June 10th. The request was very simple; asking if we could have a Deputy stop by Eli’s birthday party because he wants to be a Deputy. Eli was born with a hypo-plastic left heart, where the left side of his heart was severely under developed and he had to have a heart transplant at only 5 weeks old. A transplanted heart ages faster and therefore does not last as long. Early this year doctors found that his heart is functioning less and less efficiently. Everyday things like eating and walking have become more and more difficult. He now receives oxygen and gets around in a wheelchair to conserve energy. So just having a Deputy stop by Eli’s party didn’t seem like enough for this special celebration."

"We had a very special Junior Deputy badge made thanks to Blackinton which is the company that manufactures our badges. We also had a Deputy uniform custom made to fit Eli thanks to our friends at Red the Uniform Tailor who also donated a duty belt complete with a handcuff case and handcuffs, a glove pouch and a flashlight. In addition, the Sheriff drafted an Honorary Oath of Office appointing Eli a fully sworn Junior Deputy.

"Sgt. Chad Beres along with Deputies Justin Jilling, Jeremy Miller and Dustin Thompson responded to the Morgan residence in their squad cars to deliver Eli his presents at his birthday party. After opening his present Eli wanted to put on the uniform shirt right away. The Oath of Office was read appointing Eli a Junior Deputy and his badge was pinned on his uniform. He posed for some pictures, checked out the squad, played with the siren and checked out the squad’s radar unit which was used to take a reading of him in his motorized wheelchair as he blazed down his driveway at a whopping 9mph. We’re honored to have Eli as part of our blue line family. Thank you to the Morgan Family for letting us share in your special celebration."