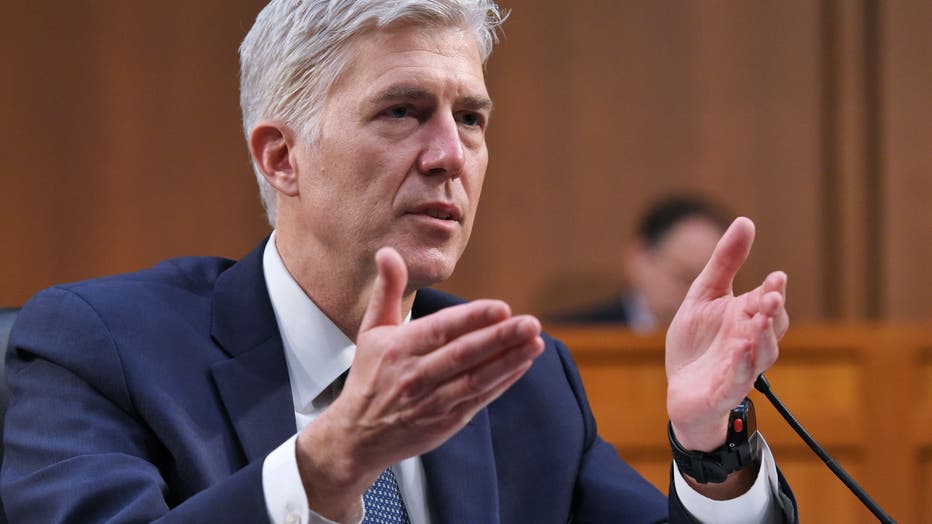 Heading to a deeply divided Senate

A Senate panel is expected to approve President Donald Trump’s Supreme Court pick, Neil Gorsuch, on Monday — the first step in confirming his nomination, which will likely end in a bitter partisan battle that could conclude with the fundamental altering of rules of confirmation of judge's for the land's highest court.

The 11 Republicans and nine Democrats on the Senate Judiciary Committee are anticipated to vote along party lines and narrowly approve the Denver-based judge. After passing the panel, Gorsuch’s nomination will head to the full Senate, where GOP leaders have threatened to change Senate rules to confirm the judge without bipartisan support.

Supreme Court picks typically need the support of 60 senators — a three-fifths majority — to end debate and hold a final confirmation vote. But many Democrats have said they’ll filibuster and refuse cloture (the move to end debate and take a final vote), which would effectively block Gorsuch’s nomination.

Republican leaders have said that if they’re faced with a filibuster, they’ll deploy the “nuclear option” — a congressional maneuver that would allow simple majority of senators to end debate and hold a vote, paving the way for Gorsuch's approval.

"Neil Gorsuch will be confirmed this week," Majority Leader Sen. Mitch McConnell (R-Ky.) said on CNN Sunday. "How that happens really depends on our Democratic friends. How many of them are willing to oppose cloture on a partisan basis to kill a Supreme Court nominee."

Eight Democrats or independents would need to side with the 52 Senate Republicans to get Gorsuch’s nomination through under normal Senate rules. So far, 36 Democrats and one independent have announced they’ll filibuster, while four Democratic senators have said they oppose the move.

Anti-Gorsuch Democrats insist he’s too conservative, and have asked for President Trump to re-nominate a more moderate judge.

"Look, when a nominee doesn't get 60 votes, you shouldn't change the rules, you should change the nominee," Senate Minority Leader Chuck Schumer (D-N.Y.) said on NBC Sunday.

The seat that’s been vacant for 14 months

Gorsuch is the second judge nominated to fill the late Justice Antonin Scalia’s Supreme Court seat, which has been vacant for more than a year. Just a month after Scalia’s February 2016 death, then-President Barack Obama chose Merrick Garland as his Supreme Court pick.

But Senate Republicans, led by McConnell, refused to even hold a hearing for Garland, insisting that the winner of the November presidential election should get to pick his or her own nominee — even though the new president wouldn’t take office for nearly a year. Shortly after his January inauguration, President Trump nominated Gorsuch, with conservatives lauding the judge's history of constitutional originalism and track record of conservative values.

Gorsuch’s hearing in front of the Senate judiciary panel began on March 20, and tensions over his nomination — specifically, his replacing Garland as the presidential nominee for Scalia’s old seat — flared in the first hour.

During his hearing, Democrats grilled Gorsuch on a wide array of issues. Sen. Dick Durbin (D-Ill.) asked Gorsuch about a letter from one of his former students, which alleged that he once suggested that many professional women manipulate their companies for maternity leave benefits.Gorsuch said that he never made such an insinuation. Instead, he claimed, he asked his class if they’ve ever faced inappropriate questions — like if they plan to have children in the future — during job interviews.

“I am shocked it still happens every year that I get women, not men, raising their hand to that question,” he said.

Others demanded Gorsuch’s opinion on landmark abortion rights case Roe v. Wade.Gorsuch refused to say if he agrees or disagrees with the decision, but said he believes it is “precedent.”

A ‘slippery slope’ toward a second House?

If Senate leaders invoke the so-called nuclear option, Gorsuch will almost certainly be confirmed, since every Republican lawmaker is expected to back the judge’s nomination. But circumventing the normal voting process is not without consequences. Both parties traditionally refrain from using the nuclear option because it encourages a partisan divide that could spill over into other votes later.

Both Republicans and Democrats in the Senate have voiced anxiety about the threat of using the nuclear option for Gorsuch. They compared a Senate that uses the aggressive maneuver too frequently to the House of Representatives, where the minority party has few rights because filibusters are never allowed.

“The thing I worry most about is that we become like the House of Representatives. What’s the next step? Legislation?” Sen. John McCain (R-Ariz.) told the Hill. “I’m convinced it’s a slippery slope.”

Sen. Joe Manchin (D-W.Va.) — one of the three Democrats who have said they will not filibuster Gorsuch’s nomination — echoed McCain’s worries.

“People who have been here for a long time know that we’re going down the wrong path here. The most unique political body in the world, the United States Senate, will be no more than a six-year term in the House,” he said. “I’m doing whatever I can to preserve the 60-vote rule.”

Republican Senators have said they hope to confirm Gorsuch by April 10.