Veteran intervenes in dramatic way to knock over man with knife

A knife-wielding man who a witness said was "demanding $20" in a Walmart in Columbia, South Carolina, was disarmed in dramatic fashion on Jan. 4, 2023. (Credit: La’QuandaLuxe via Storyful)

COLUMBIA, S.C. - Walmart shoppers, including a military veteran, were captured on video helping to subdue a man waving around a knife and threatening people at a store in South Carolina.

The incident was reported on Jan. 4 at a Walmart store in the city of Columbia, according to local news station WIS-TV, citing authorities. Video recorded by an employee shows a man in a red hoodie shouting and swearing inside the store while brandishing a knife.

"I was at the self-checkout where I work, and the customer came in and demanded $20," the employee told Storyful. "I saw he had a knife after him yelling demanding $20. I said ‘Oh, he has a knife’ to one of my managers who tried to confront him."

Another shopper, later identified as veteran Demario Davis, is later captured on video striking the man in the red hoodie with a pole used for the checkout line. The man then falls to the ground, and another witness appears to take the knife from him.

Later, the man is seen struggling with responding deputies from the Richland County Sheriff’s Department before being handcuffed.

"I was at the checkout when my son noticed the guy walk in with the knife open," Davis told FOX News Digital, adding that the suspect then walked to the service desk waving the knife at a few female employees — who took off running from the guy.

"I then asked a female employee, ‘where is security?’ And she stated she was security," Davis recalled. "As I'm walking towards the area where the gentleman waving the knife is terrorizing other customers and employees, he yelled out when the cops get here I'm going to start cutting you all up."

Davis told FOX News Digital that another customer tried to subdue the man waving the knife, "but the guy tried to cut him in the face."

"That's when my military training kicked in, and I casually walked over to the object not only to take him down but also protect myself in case I failed, but with my great military training I was able to neutralize the threat until law enforcement arrived," Davis added. 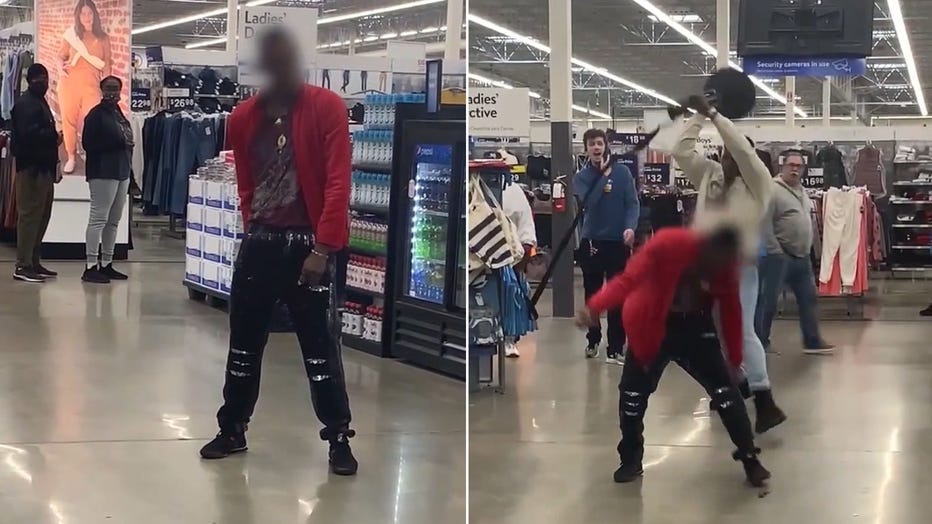 The knife-wielding man is pictured in screengrabs from a video recorded at a Walmart store in Columbia, South Carolina, on Jan. 4, 2023. (Credit: La’QuandaLuxe via Storyful)

"I’m a community person, so if I see something in the community that’s not right, with all the violence and things and attacks going on, gun violence you know, you want your people in the community to step up as well," Davis continued. "The cops can’t do it all by themselves."

The Crisis Intervention Team with the Richland County Sheriff’s Department assessed the man at the Walmart store and decided to take him to a local hospital for an evaluation, according to WIS-TV.

No charges were immediately filed, the station reported.