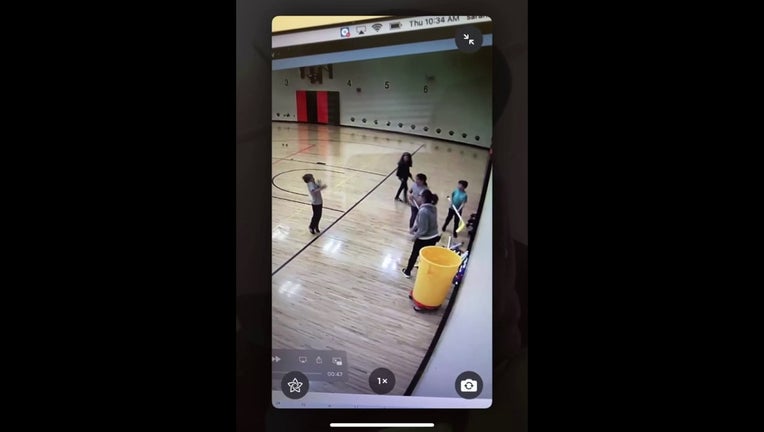 Video shows the student being struck by the mini-hockey stick.

PRINCETON, Minn. (FOX 9) - A Sherburne County teacher has resigned, after school surveillance footage appeared to show her hitting a 2nd grader with a hockey stick.

In the video, students are seen placing their hockey sticks in a pile. Eight-year-old Easton Johnson can be seen tossing his hockey stick into the pile. The teacher quickly picks it up and throws it at him, resulting in the boy losing a tooth.

"We’re in shock," said Easton’s father Lance Johnson. "She’s within five feet and she didn’t even hesitate. Like she was trying to hurt him."

Surveillance footage out of Sherburne County shows a teacher throwing a hockey stick at a student – causing him to lose a tooth, his parents say.

According to the superintendent of Princeton Public Schools, Ben Barton, the teacher was placed on administrative leave immediately following the incident and the district has since accepted her resignation.

In an internal email to staff two weeks following the incident, the school’s principal notifies colleagues of the teacher’s departure without mentioning the alleged assault, saying she wished the teacher "the absolute best."

More recently, the district posted on its Facebook page congratulating the teacher on her retirement. The superintendent apologized for the post Monday, saying he did not authorize the post and it was taken down as soon as he was made aware.

The Johnson’s say they are only now going public with the March 28 incident, because they are disappointed with the lack of communication they’ve received from the district.

In an email to Fox 9 Monday, Superintendent Barton said, "the district does not condone or tolerate any form of inappropriate conduct by staff. I share frustrations about the incident that occurred. Although the district promptly investigated and took appropriate action, I recognize that such action does not change the fact that the incident occurred."

In a letter to Lance and Jodi Johnson, the Minnesota Department of Education says an investigation found their son was subject to maltreatment by the teacher. The investigation finding that the teacher’s actions were not accidental, and that she intentionally threw the stick at him.

Update: A previous version of this story said the Princeton Police Department declined to investigate the alleged assault, as stated by the Minnesota Department of Education. Chief Todd Frederick tells FOX 9 that his department has had an open investigation on this case since it was reported to police a few days following the incident. Frederick says it wasn't until recently that they were finally able to obtain the video evidence, which he called a crucial piece of the investigation.

The case is expected to be submitted to the county attorney's office for review in the coming days.