WASHINGTON — Liquid nicotine products that look like juice boxes, candies and other kids' snacks came under government scrutiny Tuesday, as health authorities warned they could pose a danger to children. 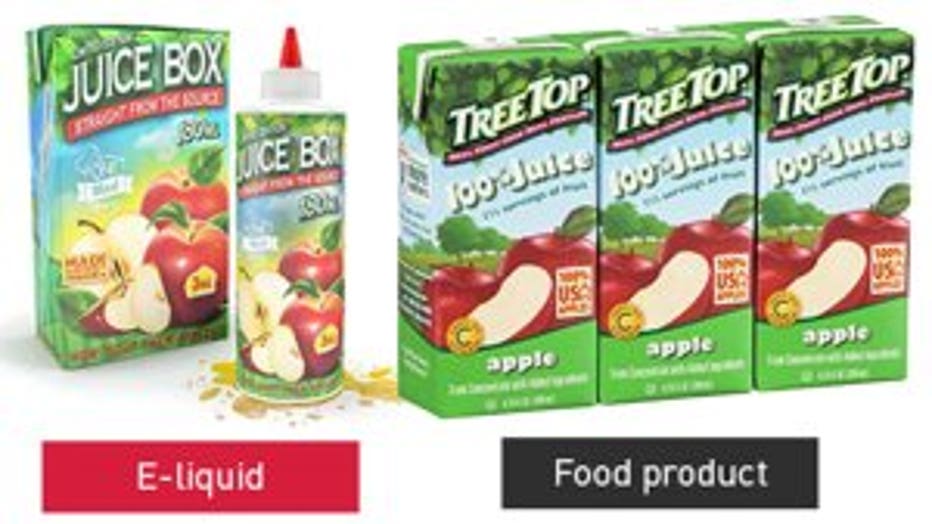 The Food and Drug Administration issued more than a dozen warnings over the illegal packaging practice, saying it can lead to poisoning if children mistakenly drink the liquids, which are intended for use with e-cigarettes and vaping devices. Exposure to nicotine, even in small amounts, can cause seizures, coma and fatal heart problems in children.

Some of the packages targeted by regulators look like fruit juices, Warhead candies and Nilla Wafers. The FDA collaborated on the action with the Federal Trade Commission, which polices deceptive advertising.

E-cigarettes are electronic devices that vaporize flavored liquid, which typically contains nicotine. Calls to poison control centers about nicotine formulas have increased in recent years, according to the FDA, with more than 8,000 cases involving children between 2012 and 2017.

No deaths have been reported with the products highlighted Tuesday, regulators said.

"These are preventable accidents that have the potential to result in serious harm or even death," said FDA Commissioner Scott Gottlieb, in a statement. "Companies selling these products have a responsibility to ensure they aren't putting children in harm's way or enticing youth use."

Warnings were issued to 13 manufacturers, distributors and sellers. Six of the companies were cited for illegally selling the products to minors. Such warnings are not legally binding but the government can take companies to court if the issues are ignored.

Under federal law, people must be at least 18 years old to purchase vaping products. In some states, the requirement is 21 and older.

The action comes one week after the FDA disclosed a nationwide crackdown on underage sales of Juul e-cigarettes, which have become popular among some teenagers as a way to vape at school and in public. The FDA issued warnings to about 40 gas stations, convenience stores and other retailers for selling the devices to minors. Additionally, the agency asked manufacturer Juul Labs to turn over information about how it markets and designs its products, which resemble computer flash drives and work with nicotine flavors like mango, and "cool cucumber."

The FDA gained authority to regulate e-cigarettes in 2016, but anti-smoking advocates have criticized the agency for not working more aggressively to stop companies from appealing to underage users.