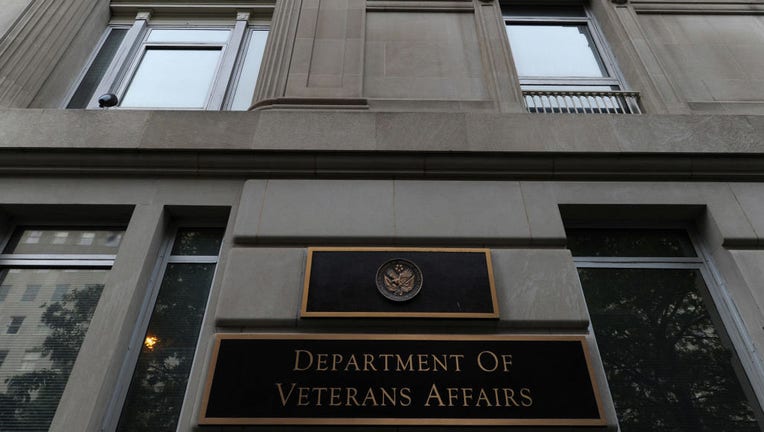 FILE - The United States Department of Veterans Affairs headquarters is seen on May 28, 2014, in Washington, D.C. (Photo by Matt McClain/ The Washington Post via Getty Images)

WASHINGTON - Any U.S. military veteran who finds themselves in a suicidal crisis can now visit any Veterans Affairs health care facility or any private facility to receive emergency care at no cost.

The new policy, which officially began on Tuesday, includes veterans who are not enrolled in the VA system. The benefit also includes inpatient or crisis residential care for up to 30 days and outpatient care for up to 90 days, officials said.

The VA already provides emergency suicidal care, but under the new policy, veterans will no longer have to pay any co-pays or fees associated with their treatment. The government will cover the cost for veterans who receive care at a non-VA facility or will reimburse those costs. This also includes the cost of an ambulance ride to the hospital, according to the new change.

"This expansion of care will help prevent Veteran suicide by guaranteeing no cost, world-class care to Veterans in times of crisis," the U.S. Department of Veterans Affairs said. "It will also increase access to acute suicide care for up to 9 million Veterans who are not currently enrolled in VA."

Those eligible, regardless of VA enrollment status, include veterans who were "discharged or released from active duty after more than 24 months of active service under conditions other than dishonorable."

Also eligible are veterans of the armed forces, including reserve service members, "who served more than 100 days under a combat exclusion or in support of a contingency operation either directly or by operating an unmanned aerial vehicle from another location who were discharged under conditions other than dishonorable."

The PACT Act is now headed to President Joe Biden's desk and will await his signature. Former "The Daily Show" host and comedian Jon Stewart has been an avid advocate for the bill and despite the passage by the Senate, had some somber words to share during a press conference on Tuesday. "But I will say this, I'm not sure I've ever seen a situation where people who have already given so much had to fight so hard to get so little. I hope we learned a lesson," Stewart said.

The new policy is part of the Veterans Comprehensive Prevention, Access to Care, and Treatment (COMPACT) Act of 2020, and part of a wider effort by the government to confront spiraling suicide rates in the military and a push to reduce the stigma of seeking help.

According to Defense Department data, suicides among active-duty service members increased by more than 40% between 2015 and 2020. The numbers jumped by 15% in 2020 alone.

A 2021 study by the Cost of War Project concluded that since 9/11, four times as many service members and veterans have died by suicide as have perished in combat. The study detailed stress factors particular to military life: "high exposure to trauma — mental, physical, moral, and sexual — stress and burnout, the influence of the military’s hegemonic masculine culture, continued access to guns, and the difficulty of reintegrating into civilian life."

But a Pentagon report shared in October indicated a decline in suicide rates last year following increased attention by senior military leaders and an array of new programs aimed at addressing the issue.

"Veterans in suicidal crisis can now receive the free, world-class emergency health care they deserve – no matter where they need it, when they need it, or whether they’re enrolled in VA care," VA Secretary for Veterans Affairs Denis McDonough said in a statement on Friday. "This expansion of care will save Veterans’ lives, and there’s nothing more important than that."

If you’re a veteran in crisis or concerned about one, contact the Veterans Crisis Line to receive 24/7 confidential support. You don't have to be enrolled in VA benefits or health care to connect.

To reach responders, Dial 988 then Press 1, chat online at VeteransCrisisLine.net/Chat, or text 838255.