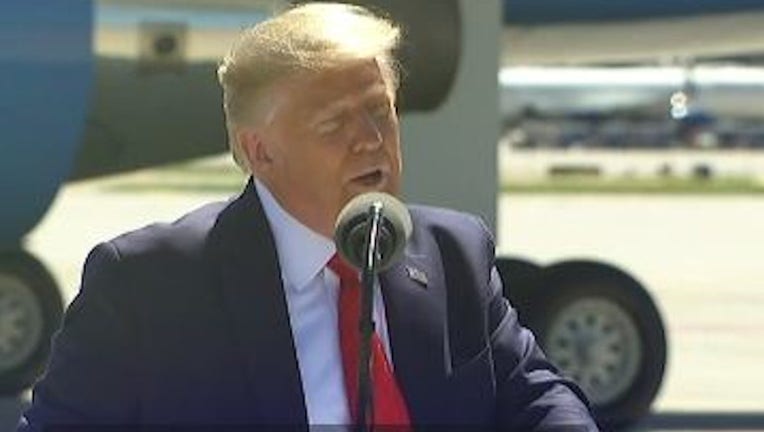 In Mankato, Minnesota, Trump was expected to step up his rhetoric against Biden.

“This election is about the survival of our nation. Joe Biden is the puppet of left-wing extremists trying to erase our borders, eliminate our police, indoctrinate our children, vilify our heroes, and replace American freedom with left-wing fascism,” Trump said in remarks prepared for delivery. “But the proud people of Minnesota will not let this happen.”

Democrats want to elevate their “left-wing war on cops,'' Trump asserted. “Their sympathies lie with lawbreakers and with criminals." In recent weeks, Trump has repeatedly and falsely asserted that Biden supports defunding the police.

One idea to lead off his week of counterprogramming, however, was scrapped.

Minnesota Gov. Tim Walz said the White House had been interested in Trump visiting the makeshift memorial in Minneapolis on the site of Floyd’s fatal encounter with police on Memorial Day.

“I spent this weekend trying to tell the White House why it was a really bad idea to have President Trump go down and stand at the George Floyd memorial and use (it) as a backdrop for his campaign and ignite the pain and the anguish that we’re feeling in Minnesota,” the governor said Monday during a virtual breakfast for the state’s delegation to the Democratic National Convention.

On the tarmac in Minneapolis, Trump addressed about 150 supporters — half of them wearing masks — who chanted “Four More Years.” Trump told them that the Democrats will be taking away the constitutional amendment to bear arms.

Trump was visiting Minnesota and Wisconsin on Monday — the latter the official host state of the entirely virtual Democratic National Convention — to launch a week of travel and political events aiming to blunt the customary polling “bounce” that a candidate gets during their convention week. The president trails in both public and private surveys less than three months before Election Day.

“We’re going to be working very hard,” Trump said before leaving the White House. “We have to. We’re getting down to final crunch. We want to be there.”

Marking his heaviest week of political travel since the coronavirus put a stop to his campaign schedule and imperiled his reelection chances, Trump was expected to sharply criticize Biden's economic policies in the Upper Midwest battleground states.

On Tuesday, Trump will take on Biden over his immigration policies during a visit to Yuma, Arizona. He is also set to travel to Pennsylvania, the state of Biden's birth, on Thursday, ahead of the Democrat's acceptance speech.

Trump's aggressive push comes as his path to reelection has narrowed since the coronavirus hit, and he's been forced to play defense in the states that carried him to reelection four years ago. Minnesota, viewed as a GOP pickup opportunity a year ago, now appears to be slipping out of reach, Republicans say.

Wisconsin, a state that had voted for Democratic presidents for decades until Trump's 2016 victory, has emerged as one of the toughest battlegrounds of 2020. Vice President Mike Pence on Wednesday plans to visit the southern part of the state. Trump's campaign views the state's whiter, older demographics to be more favorable than Michigan, which Trump also won four years ago but is increasingly seen as a likely Democratic pick-up.

Trump's campaign is seizing on Biden's decision not to travel to Milwaukee for the convention, citing the pandemic, as the Democrat ‘effectively abandoning' Wisconsin. The GOP is surging Republican surrogates to the state this week in a show of force, including Pence and Republican National Committee Chair Ronna McDaniel.

Democrats insist they are still contesting the state, where they are devoting resources to television ads and field organizing, but that Biden is just being cautious and curtailing non-essential travel due to the coronavirus. He and Sen. Kamala Harris, his newly announced running mate, are set to deliver their convention addresses from Biden's home state of Delaware this week, mitigating the need for air travel.

The Republican Party and Trump campaign are also ramping up their efforts as Biden takes center stage. Trump Victory, the campaign's joint field program with the Republican National Committee, will be holding over 2,500 events across the country, the RNC said. They also plan to knock on more than 1 million doors and call millions more voters during the week of the Democratic convention.

The events this week come as Trump's campaign is looking to redefine what the president's political events look like in the age of the coronavirus. Trump is set to address hundreds of supporters at airports in Oshkosh, Wisconsin, and Mankato, Minnesota, two months after he was forced to abandon plans to resume holding rallies amid a resurgence in cases.

In Minnesota, there is a statewide mask mandate for public indoor spaces, and capacity must be limited so safe social distancing can be maintained. In Wisconsin, supporters are required to be masked, but there is no statewide limit on how many people can gather.

“You better believe that Joe Biden and Kamala Harris are going to get somewhere between a 8 and 10 point bump after this convention they put on," Gidley told Fox on Monday, “solely because the media just fawns all over them.”