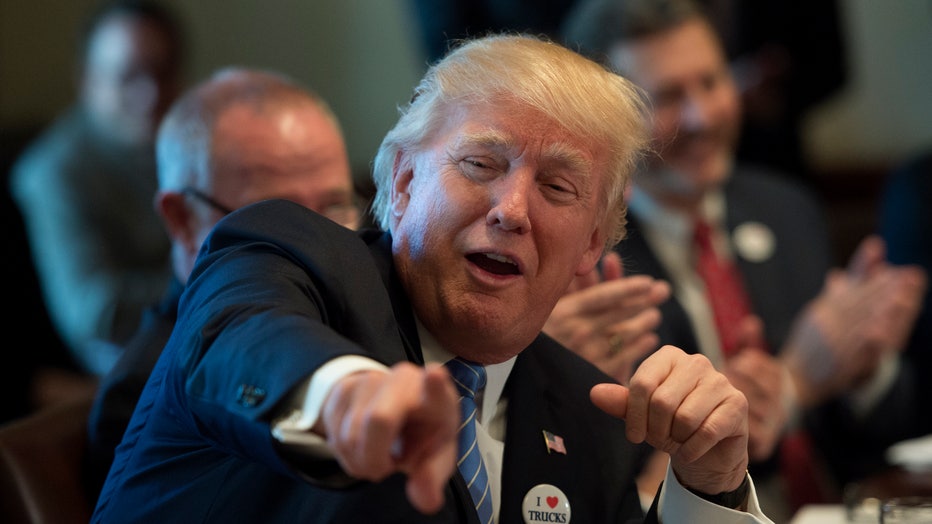 U.S. President Donald Trump holds a listening session on health care with truckers and CEOs from the American Trucking Associations in the Cabinet Room at the White House on March 23, 2017. (Photo by Molly Riley-Pool/Getty Images)

‘No deal’ between President Trump and conservative faction

House Republicans postponed a Thursday vote on their bill to repeal and replace Obamacare after President Donald Trump failed to broker a deal with rebellious conservatives who vowed to oppose the legislation.

Instead of a vote, House Republicans will hold a closed-door meeting at 7 p.m. Thursday to discuss their American Health Care Act (AHCA), a bill that would overturn the 2010 Affordable Care Act (ACA). The proposed legislation is known as “Trumpcare” as it would overhaul “Obamacare.”

A vote could come on Friday or Monday, aides and officials suggested.

News of the delay comes just hours after President Trump and the House Freedom Caucus — a group of right-wing representatives, many of whom said they would not support Trumpcare because it maintains many of Obamacare’s regulations — failed to reach an agreement on the bill during a negotiation session.

President Trump's administration had suggested repealing Obamacare’s essential health benefit requirement — a provision that forces all health insurance plans to cover some basic health benefits, such as maternity care and pediatrics — as a compromise to woo conservatives into voting for the bill.

But the Freedom Caucus demanded more: Some reportedly would like to see more Obamacare regulations overturned, such a popular provision that forbids insurers from denying coverage to people with preexisting conditions, and others would like the legislation to cut all federal health insurance spending.

Thursday’s regulation-cutting proposal is the second time that Republicans tried to win over their more conservative colleagues with compromises. On Monday, the party released 43 pages worth of revisions designed to get the bill more votes. The changes included moving up the repeal of Obamacare taxes, allowing states to add a work requirement to their Medicaid programs from low-income Americans and paving the way for increased tax credits for older Americans.

But after the vote was postponed, the nonpartisan Congressional Budget Office announced that the earlier revisions — largely meant to appeal to fiscal conservatives — would make the legislation about $200 billion more expensive than first proposed over the next 10 years.

Republican leaders had hoped that the Trumpcare vote would come on Thursday, the seventh anniversary of the day that former President Barack Obama signed his health care bill  into law.

That landmark legislation provides large federal subsidies to low- and middle-income Americans to purchase health insurance and implemented an “individual mandate,” which requires all Americans to carry insurance — either through their employers or by purchasing insurance on their own — or face financial penalties.

Obamacare also resulted in a swarm of regulations on the health care insurance industry, including requiring that insurance companies provide certain benefits, forbidding them from charging women higher rates than men and allowing individuals to stay on their parents’ plans until they turned 26.

Repealing Obamacare has become a rallying cry among Republicans. Since virtually the moment it was signed into law, conservative lawmakers have vowed to repeal it.

In January 2016, Republicans in Congress finally passed legislation — after years of trying — that would have nixed the law, but, unsurprisingly, Obama vetoed the measure. Getting a Republican in the White House would be key to overturning Obamacare, repeal supporters said at the time.

"Obamacare is a total disaster," President Trump said at an October debate. Throughout his campaign he promised to replace the law with “the finest health care plan there is,” although he never revealed details about what that would look like.

“Our wonderful new Healthcare Bill is now out for review and negotiation. ObamaCare is a complete and total disaster — is imploding fast!” he tweeted.

A deal from the ‘great negotiator’

The Trumpcare vote delay is a major setback for House Republicans and for President Trump himself. The law is the president’s first major legislative challenge — and a key test to see how well he can work with Congress.

President Trump’s critics harped on his inability to strike a deal with members of his own party, especially since he has long boasted about his negotiating skills.

"You may be a great negotiator," House Minority Leader Nancy Pelosi (D-Calif.) said of President Trump. "Rookie's error for bringing this up on a day when clearly you're not ready."

To pass the House, let alone the Senate, the current Trumpcare bill needs significant revisions: If every Democratic representative votes against the bill (which they are expected to do), Republicans can only afford 22 defections. As of Thursday afternoon, at least 30 House Republicans had said that they oppose the legislation.

Negotiations on any revisions will be tricky, though: Agreeing to conservatives’ demands could alienate more moderate Republicans who have warned against repealing certain Obamacare measures, such as its expanded Medicaid programs which have helped insure millions of low-income Americans.

Even if House Republicans find enough votes to pass the bill, it’ll need to pass in the Senate, too. There, it’ll likely face an even tougher battle.

At least 51 of the Senate’s 52 Republicans need to vote for the bill to pass it, unless Democrats filibuster — in which case, they’ll need to convince some Democrats into supporting the bill to get it a 60-vote majority.