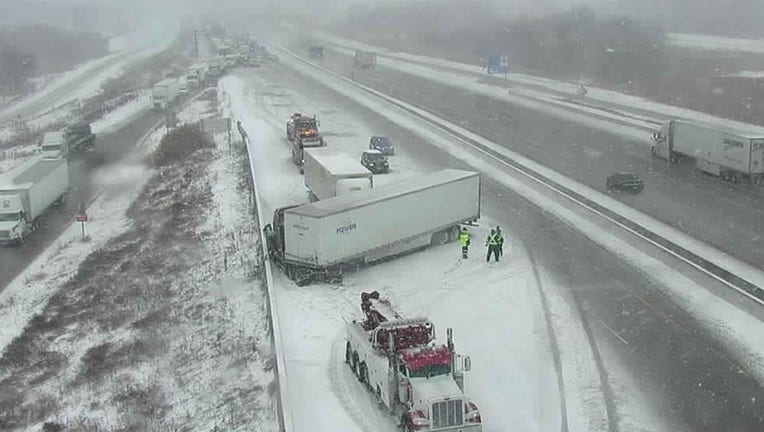 Snow plow drivers worked to keep up as snow accumulated on highways and city streets. The City of Milwaukee said more than 100 trucks were out plowing and salting main routes, but strong winds were working against crews and blowing snow back on cleared roadways.

The morning commute was messy with at least two Interstate 94 crashes involving semis. Northbound lanes of the interstate were temporarily closed near Pleasant Prairie as crews worked to clear a crash involving two semis. Another semi jackknifed near Kenosha, snarling traffic.

The storm closed hundreds of schools, including Beaver Dam, Hartford and Fort Atkinson, while others switched to virtual instruction.

The National Weather Service predicted 4 inches (10 centimeters) to 10 inches (25.4 centimeters) of snow would fall in the Milwaukee area with the highest totals along Lake Michigan.

Blowing snow is expected to continue affecting roads as late as 7 p.m. Tuesday, with wind gusts reaching as high as 35 miles per hour and expected at times to cause near whiteout conditions, the weather service said.

The Wisconsin Center COVID-19 vaccination operation will be CLOSED on Tuesday, Jan. 26 because of the weather.

All northbound lanes of I-41/94 closed at HWY ML in Pleasant Prairie due to a crash.