MILWAUKEE -- To everyone else, it looks like a Saturday afternoon middle school basketball game. But to the Milwaukee Public Schools parents watching their children play, it might as well be the NBA finals.

"Right there, right there!" Grantosa Drive parent Justin Crawford yells as his son passes the ball.

But over the last few weeks, Crawford and other MPS parents have been forced to shift their focus from the game to something more serious. 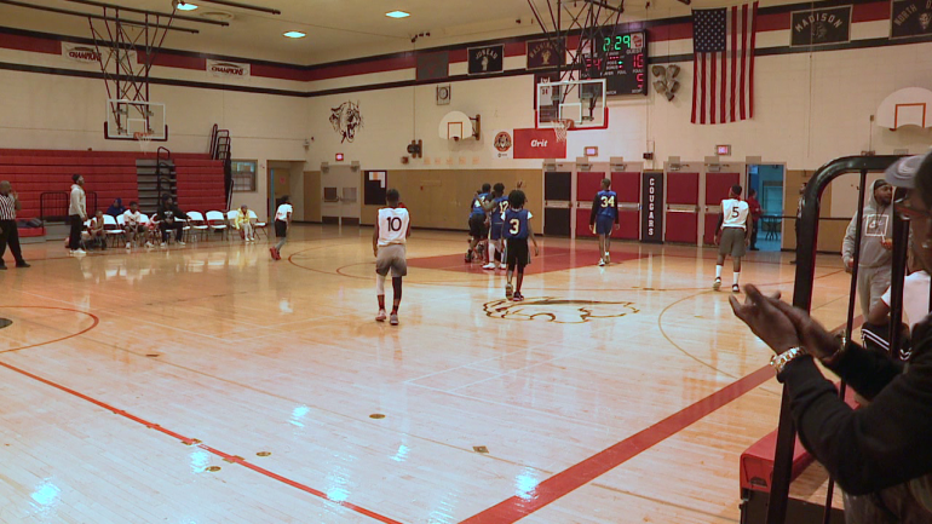 "It's just sad that someone would take these kids' trust and use it like that," Crawford said.

Parents called the FOX6 Investigators when they had a hard time getting answers about how the money they raised through a popcorn  fundraiser for new team uniforms disappeared. FOX6 uncovered inconsistencies in the coach's account of what happened and bigger concerns about how MPS handles school funds.

'Something fishy is really going on'

It was LaToya Spencer's first time participating in a school fundraiser.

"I was excited!" Spencer said. "I got good sales here."

Spencer's eighth-grade son played basketball for Grantosa Drive. She says she trusted his coach, Savonta Pettway, when he said a popcorn fundraiser would purchase new team uniforms, shoes, and prizes. 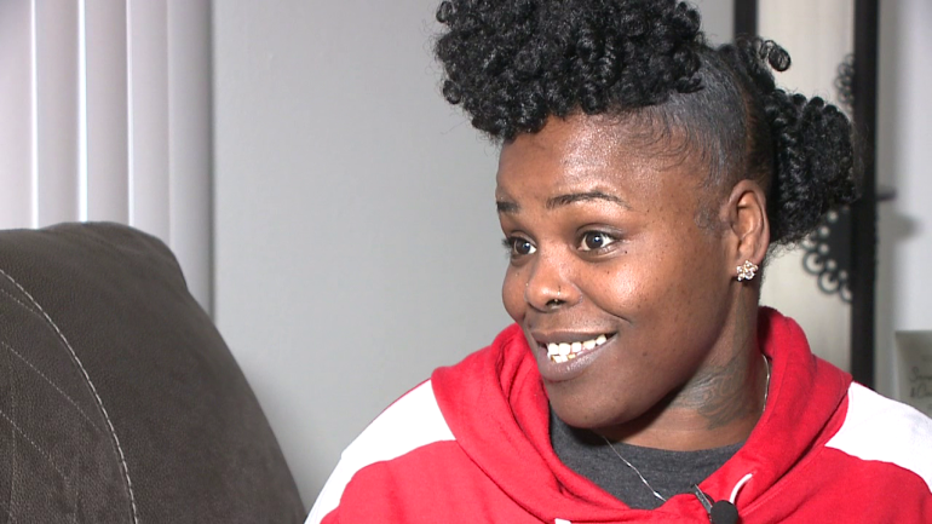 "So I'm like, 'Oh, this is nice!'" Spencer said. "This will be a nice way to show our young men, to give our young men confidence."

Receipts show Spencer collected 64 popcorn orders that totaled $960. She and other parents say Coach Pettway took the money they raised to order the popcorn; the plan was to distribute the popcorn to the people who bought it, while using the profits for the uniforms.

But Spencer got suspicious when Pettway pushed the popcorn arrival date back five times in one month. Eventually, she called the fundraiser company. Employees told her the same thing they told FOX6; no one from MPS had placed a popcorn order. 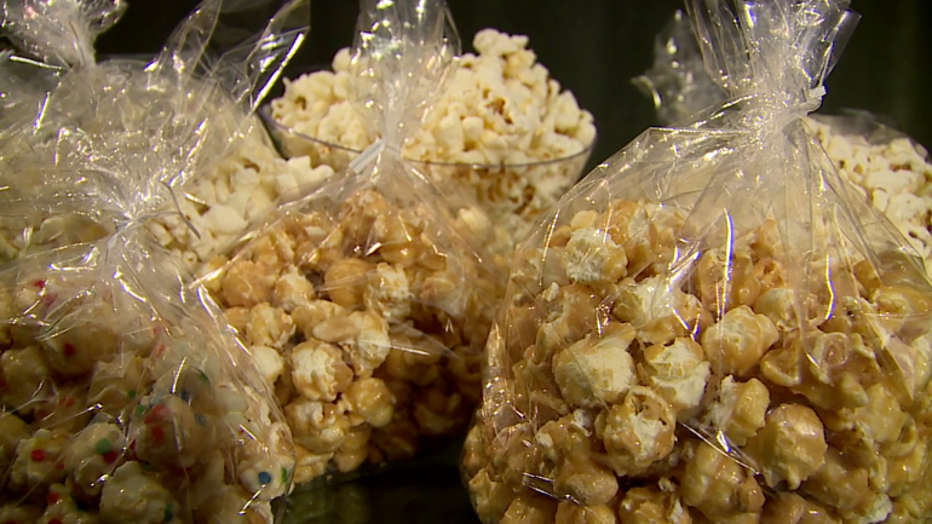 "My reaction was like, 'Excuse me?!'" Spencer said. "Something fishy is really going on."

Spencer took her concerns to MPS. The school district denied knowing about the fundraiser at all, calling it "unauthorized."

"I just want to return these people's money," Spencer said, noting that she had sold several bags to friends and coworkers. "They're thinking I took their money and pulled a Ponzi scheme."

Pettway promised Spencer a refund, but then she started having déjà vu.

"It's one story after another," Spencer said with an eye roll.

First, Pettway texted Spencer saying he couldn't get her the money until after his mother returned from a trip to Chicago. 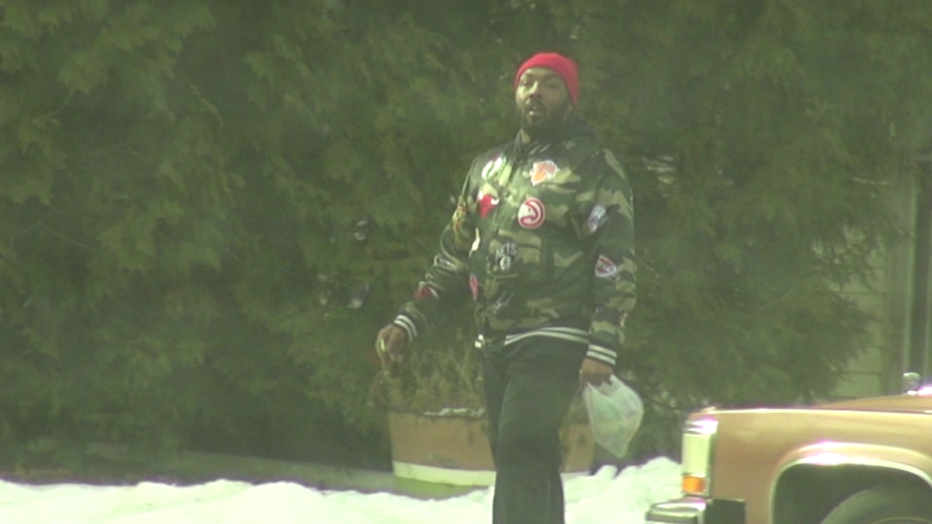 "I didn't question it because I knew it was b.s.," Spencer said.

Pettway then told parents a second story, saying he used the fundraiser money to help his family out of a "tough situation."

"I understand what you're saying with your settlement money, your niece and all that," LaToya's husband said in a recording of a phone call he had with Pettway. "But at the end of the day --"

"You got money from all these parents, man," LaToya's husband said. "And you did not do what you were supposed to do with the money. You did what you felt was right in your life. That’s just not right, Pettway."

"I know it's coming late," Pettway said later in the conversation. "But I'm working on it right now." 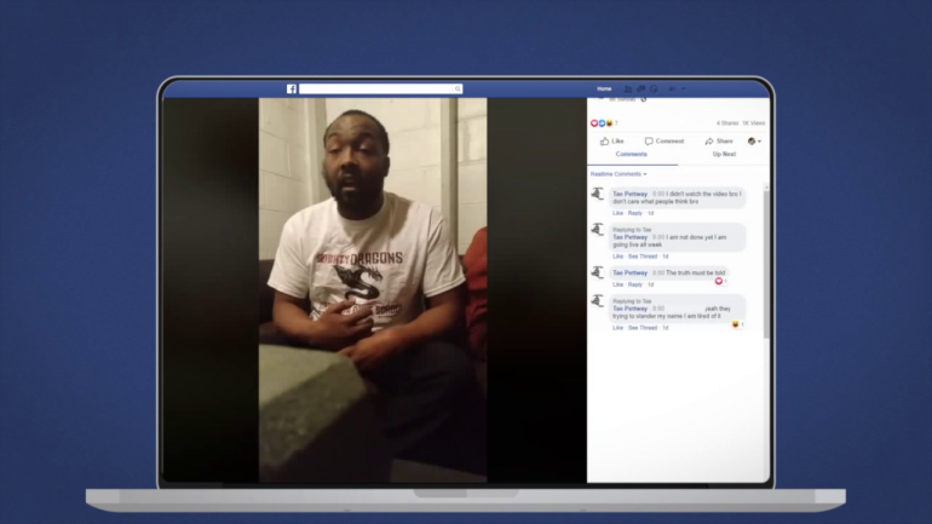 "If somebody put a gun to your head, how would you feel?" Pettway said in the live video. "I had to do what I had to do...whether you believe me or not, I was a victim. I was a victim of robbery."

"I know I let them down," Pettway continued. "But what was I supposed to do? My life was in danger."

"You got children at their churches setting up tables, selling popcorn to the congregation" Spencer added, raising her voice. "Only to be robbed. We were robbed. You wasn't robbed, we were robbed."

How did this happen?

It's hard to tell exactly how much fundraiser money went missing; parents report giving Pettway amounts like $150, $240, and Spencer's $960. Now, they're trying to figure out how all this happened in the first place.

"Do you think I can go back for another fundraiser, let's say a year from now, and say, 'Hey, could you promote my son or my daughter's this, that, or the other?'" Spencer asked. "They're not going to do it."

"My trust is so low in the MPS system," Spencer added.

Public records from 2018 and most of 2019 show at least 14 MPS investigations into missing funds. 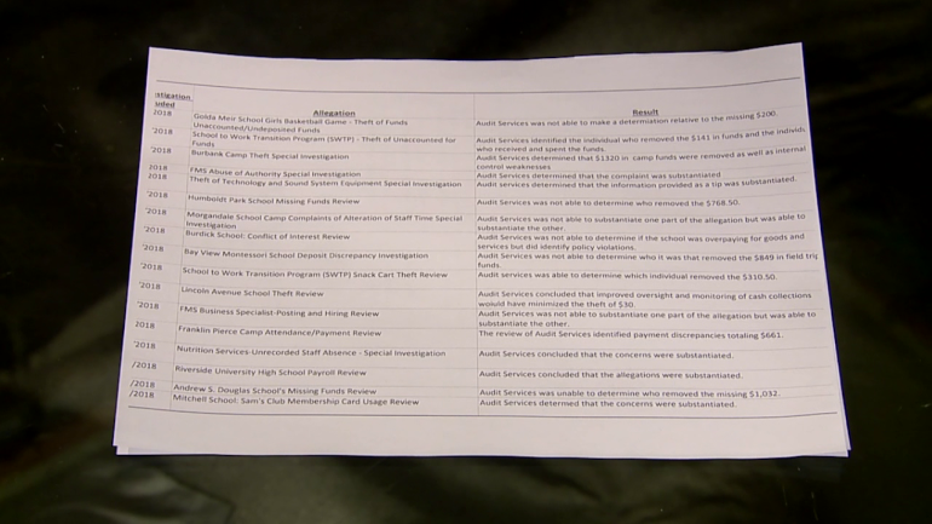 For example, the school district couldn't figure out how $200 when missing from a Golda Meir girls' basketball game, or track down $849 in Bay View field trip funds. Theft of camp money added up to more than $2,000, and at least $2,800 went missing from other schools.

MPS has policies about keeping track of school funds, and every school has occasional investigations into how those funds are used. But after the popcorn fundraiser, parents wanted to know whether MPS administrators think their policies are working and whether they'll consider updates. 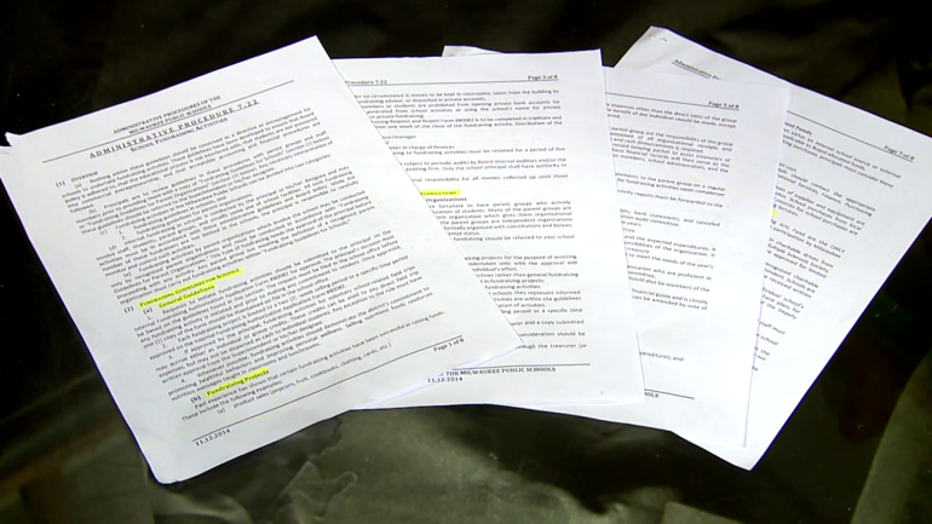 The FOX6 Investigators asked MPS Director of Communications, Shahree Douglas, when someone from the school district could answer questions on camera. She wrote back that she did not "have anyone."

In search of answers, FOX6 Investigator Amanda St. Hilaire went to an MPS school board meeting.

"I'm about to start a board meeting," Superintendent Keith Posley said when St. Hilaire asked if he could talk about how MPS oversees school funds on camera.

"OK, can we catch you right after?" St. Hilaire asked.

"I can't promise that," Posley said.

Posley did promise that someone from the communications department would speak to FOX6.

"No," Shahree Douglas said, when St. Hilaire asked if she could speak about MPS financial oversight. "Because I don't have the answer to that."

"Does anyone here have the answer to that?" St. Hilaire asked as Douglas looked back to the board.

"The meeting is going to start," Douglas whispered.

"Can we step outside and talk?" St. Hilaire asked.

"So no one here has any answers to how these dollars are supposed to be spent?" St. Hilaire asked as Douglas walked away.

The search for Coach Pettway

After the FOX6 Investigators called Pettway, he sent a series of text messages saying he would speak on camera to give his perspective about what happened.

"I want this to be a apology  to my school and community not all about the popcorn," Pettway wrote. "Is that cool?"

"We'll cover lots of things, including any apologies, the popcorn (because that's how this started), and where you see things going from here," St. Hilaire texted back.

Pettway picked the date, time, and location for the interview, claiming he was meeting FOX6 at his address. He did not show up. 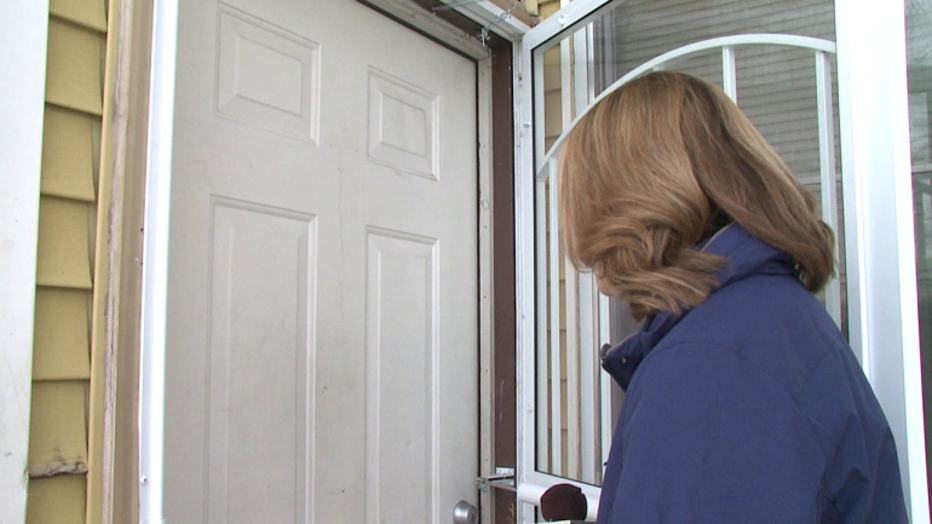 Each time, he claimed he was meeting with his attorney. When FOX6 asked for his attorney's name to fact-check his claim, he refused to provide it.

During one of the times Pettway claimed he had an "attorney meeting," a FOX6 producer caught him on camera, hanging out by himself outside an apartment complex. By the time  St. Hilaire showed up to ask him questions, Pettway had already gone back inside. He refused to respond or come to the door when St. Hilaire knocked and asked questions.

Pettway has not been charged with a crime; the Milwaukee County District Attorney's Office said there is an "open investigation."

On Friday night, MPS' communications director sent FOX6 an email, saying Pettway was no longer working or volunteering with the school district. Shahree Douglas  did not directly answer questions about whether MPS would consider policy changes as a result of what happened. 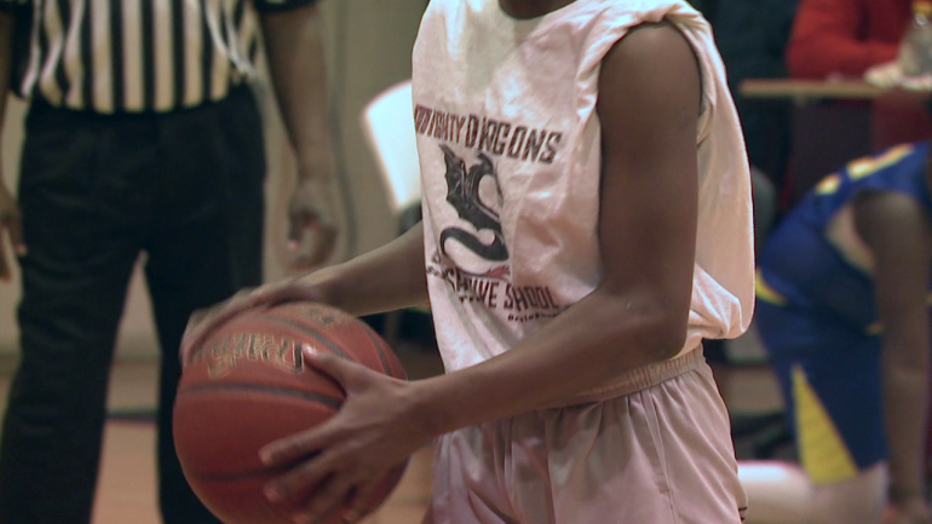 Originally, parents say administrators told them they would need to go to small claims court to get their money back. However, Douglas now says MPS met with parents this week and issued refunds to those who wanted their money back; everyone else should receive their popcorn orders soon.

Parents say it will take longer to truly move forward.

"It's not just about the popcorn," parent Justin Crawford said. "It's about the kids' trust."