MILWAUKEE — As President Donald Trump rallied supporters Tuesday night, Jan. 14 by defending his decision to kill a top Iranian general, the Democrats vying to replace him used their final debate before primary voting began to argue that doing so made the country less safe. 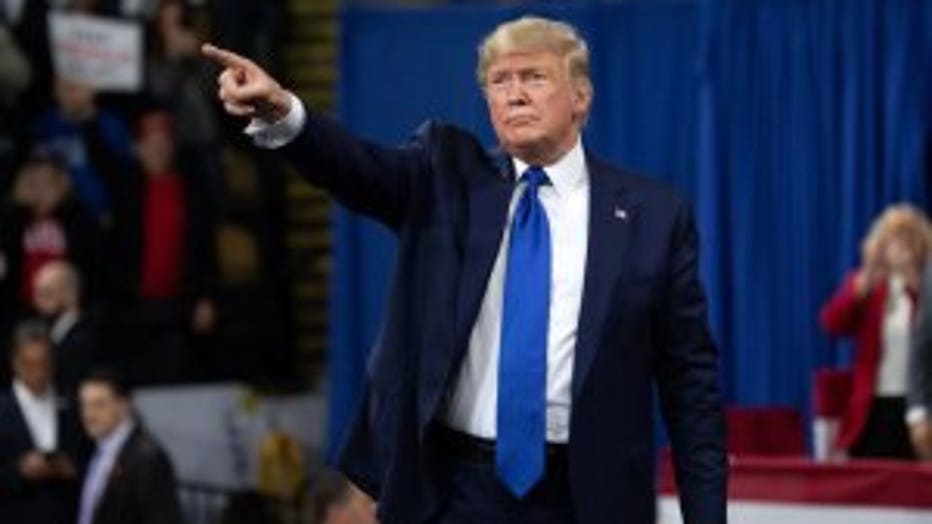 With President Trump firing up thousands in the battleground state of Wisconsin and the Democratic candidates squaring off in Iowa ahead of its Feb. 3 caucuses, the political events were expected to offer very different visions for the future of the country. But the contrast on Iran in nearly real-time was especially stark.

Addressing an audience in downtown Milwaukee — not far from where Democrats will hold their convention this summer — President Trump spent much of his speech defending his decision to order the strike that killed top Iranian General Qassem Soleimani, whom he labeled the “world’s No. 1 terrorist." That move came under intense criticism from Democrats and raised questions about whether it really prevented an imminent attack, as some President Trump administration officials have claimed, and whether President Trump should have consulted lawmakers.

“The Democrats are outraged that we killed this terrorist monster, even though this monster was behind hundreds and hundreds of deaths," President Trump said, adding that “thousands of people" don't have legs and arms “because of this son of a bitch." 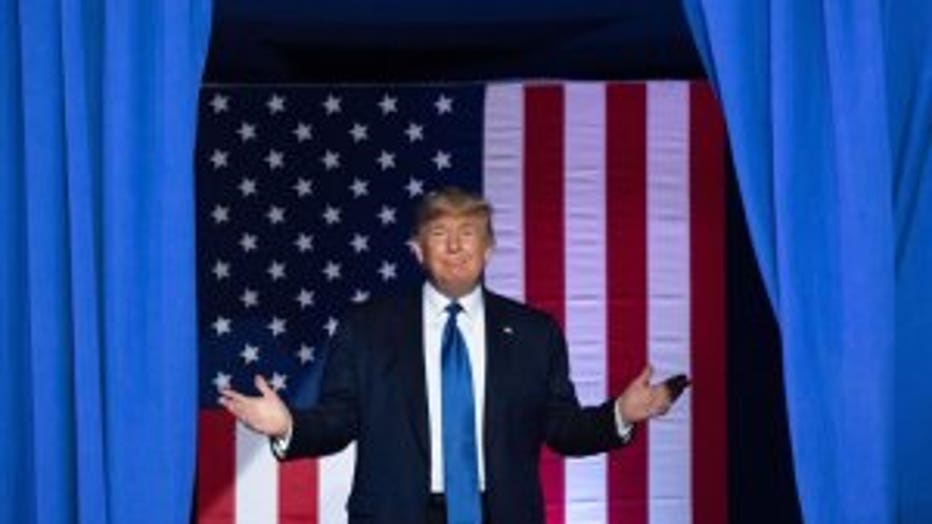 He added, "The Democrats are doing everything possible to disparage what we did with the hit on this monster" and that the other party "should be outraged by Soleimani's evil crimes, not the decision to end his wretched life.”

Moments later and hundreds of miles away, Sen. Bernie Sanders of Vermont said he feared that President Trump's actions in Iran could lead the United States into a foreign policy quagmire of the highest level.

Pete Buttigieg, the former mayor of South Bend, Indiana, said President Trump had campaigned on stopping “endless wars” only to bring the country closer to them. And former Vice President Joe Biden said Soleimani's killing was dangerous and would not have been necessary if President Trump hadn't pulled the U.S. out of a successful nuclear deal that the Obama administration had reached with Iran. 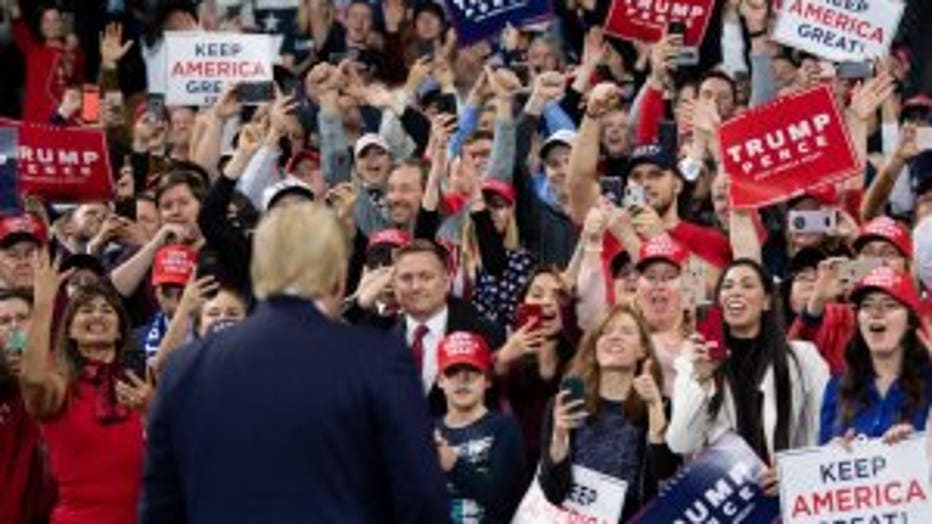 Massachusetts Sen. Elizabeth Warren pledged to bring U.S. combat troops back from the Middle East entirely, saying, “We should stop asking our military to solve problems that cannot be solved militarily.”

President Trump also took on the leading Democratic candidates, saying of Sanders: “Bernie and the radical left cannot protect your family, nor can they protect our country."

Yet the president also defended Sanders in the ongoing he-said, she-said spat between Sanders and Warren, who has said Sanders told her during a private meeting in 2018 that he didn't believe a woman could win the White House — a charge the Vermont senator vehemently denied.

“I don't believe that Bernie said that. I really don't ... It's not the kind of thing he'd say," said President Trump, who routinely insults Warren with the slur “Pocahontas.”

“When you do that you can't really recover," President Trump said.

Winning back Wisconsin is a key part of Democrats' 2020 strategy — and one of the reasons the party chose Milwaukee to host its national convention in July. President Trump won the state by fewer than 23,000 votes in 2016 and he is expected to make frequent visits in the coming months as he works to maintain his edge.

Vice President Mike Pence warmed up the rally crowd by panning the Democratic candidates as too far left for the state.

“You know, I heard they've got another debate tonight. If it's anything like the other ones, those people are going to be standing so far on the left I think that stage is going to tip over," Pence quipped.

President Trump supporters began lining up Monday evening outside the arena to make sure they would be able to get inside.

“I think the Wisconsin vote is very important, very important," said Brenda Stoetzer, 60, from Hickory Hills, Illinois. “And we need to just spread the message here that, you know, Trump is helping the people, the ordinary people. He's not making the rich richer. He's making everyone richer.” 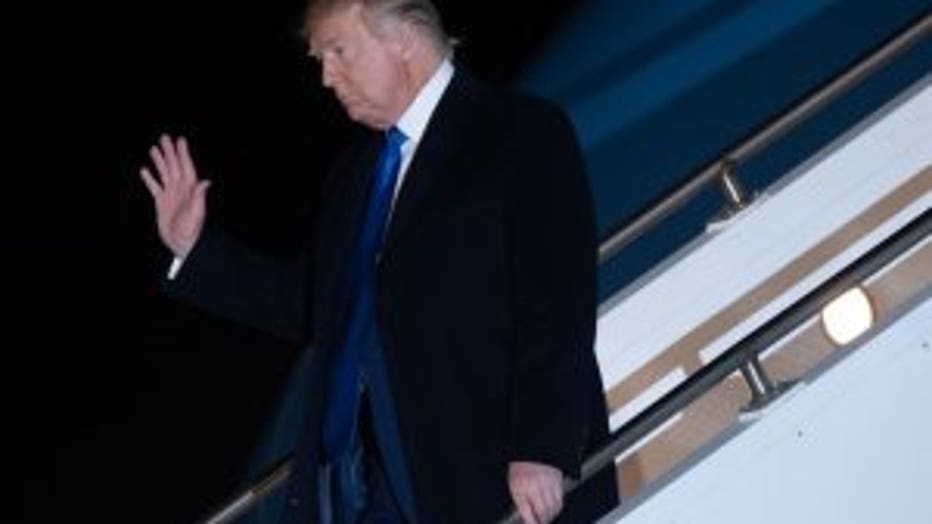 “I think he's done right by the whole country," agreed Nancy Freye, 65, who lives in Madison, Wisconsin. “He's fighting for all of us every day. I don't know how you can even get anything done, but he does. So good for him and for us."

Democrats, he said, “should be angry about his crimes, not the decision to end his wretched life."

President Trump also went on an extended riff about his efforts to roll back energy- and water-saving regulations, panning energy-efficient light bulbs and low water flow dishwashers, showers, and toilets, which he promised to replace.

"Your dishes are going to be beautiful,” he promised.

Highlighting the politics of the city, President Trump's rally was interrupted several times by protesters, who also demonstrated outside the arena where he spoke.

While Democratic voters try to decide who is their best candidate to take on President Trump, the president has been contending with the House vote to impeach him. After weeks of delay, the House will vote Wednesday to send its articles of impeachment to the Senate. Republicans hold the majority in the Senate and there is nowhere near the 67 votes needed for Trump’s removal.