Neil Nayyar’s list of instruments includes drums, piano, flute, and guitar — and that’s just a fraction of his collection and talent.

ELK GROVE, Calif. - At 16 years old, Neil Nayyar has secured a record deal, he’s been featured in car commercials with his mother, and he will perform the musical score in two upcoming films — among numerous other accolades.

Why? Because he can play 117 instruments.

The Elk Grove, California teenager said his instruments come from all over the world and estimates his collection is worth around $100,000. In addition to the common instruments found in America, he plays the Vietnamese t’rung, the Indian sitar, and Scottish bagpipes.

"This journey all started when I was in my mother’s womb," Nayyar told FOX Television Stations. 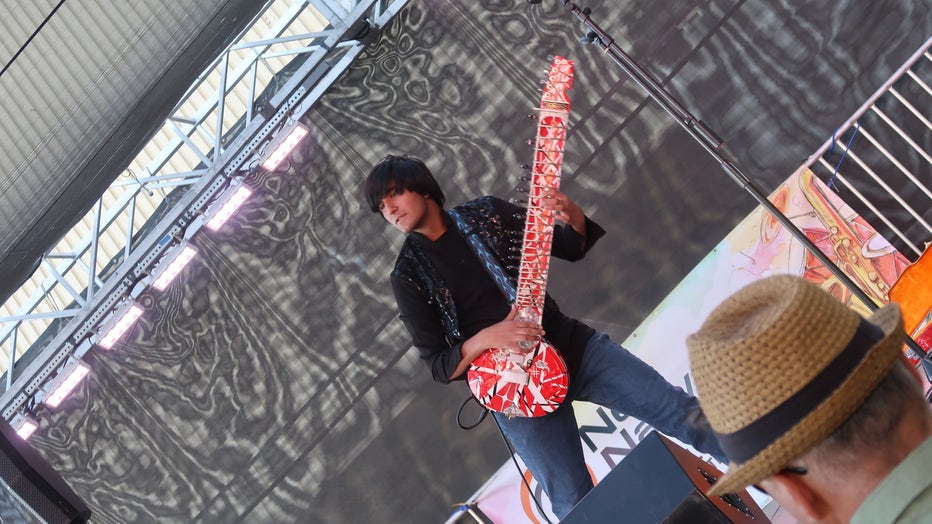 Neil Nayyar, 16, is pictured in a provided image.

Nayyar said his father read a book that said if unborn babies listen to Mozart in the womb, then the child will become a musician.

"So my dad tried an experiment by putting a tiny speaker playing Mozart music on the womb," he continued.

Nayyar said when he was 2 years old, his parents asked him to play the drums but he refused. He got another chance at age 6 during a music class. He played the drums after one lesson, and his performance impressed his parents.

"And that’s when my parents decided to bring me another instrument which was a guitar," he added. "After learning the guitar, that was the spot where I got inspired to learn more instruments."

The collection kept growing and by 2017, Nayyar could play 44 instruments at the age of 12 including the piano, flute, and saxophone. His native country of India recognized him with a world record.

Nayyar said he researches instruments online. He said surprisingly, many local stores sell antique instruments, and he’s able to purchase them with his parents’ help.

RELATED: Delta passenger explains why he declined $10K offer to give up airplane seat

But the teenager said while he may be able to play the instruments, he’s always learning to perfect his performance.

"I feel so proud of him," Nayyar’s mother, Sukhbinder Kaur, told FOX Television Stations, adding how no one else in the family plays music. "I feel like I’m blessed."

Nayyar plans to release an album next month featuring all 117 instruments. He recently put out a children’s book about different instruments and their history.

Neil Nayyar created this video showing off his musical abilities.

The teenager said part of his mission is to teach others about different cultures through the instruments he plays, adding that music is the universal language.

"People will come to me and ask me ‘What is this instrument? I have never seen this before,’ then I have to tell them," he continued.

Nayyar said he wants to learn more instruments. He dreams of one day playing with Coldplay, Hans Zimmer, and other world-renowned musicians.

"I feel very proud, looking back to where I started in the beginning of the journey to now," he said, also giving credit and gratitude to his parents.

"We always need parents’ support because they are the ones who know the right direction," he said.