Sam Reid talks with FOX Television Stations about his health experiment and love for Taco Bell.

LEXINGTON, Va. - Sam Reid is a self-described "Taco Bell enthusiast" and he’s going to put his love to the test in hopes of redefining what it means to be "healthy."

The 28-year-old from Lexington, Virginia, will eat nothing but Taco Bell for 30 days starting July 24 through August 22 for what he calls a health experiment.

That’s Taco Bell for breakfast, lunch and dinner for a total of 90 meals.

"My hope is to conduct an experiment to see if it’s possible to actually become healthier while eating exclusively at a fast-food restaurant," Reid told FOX Television Stations. "My hope would be that by the end of the month, I can measure a couple of different health metrics and see that I’ve become healthier."

RELATED: KFC rolls out new menu item but not every restaurant will have it

Reid said he chose the fast-food chain for his experiment because it is his favorite restaurant. He also wants to mimic the experiment from the 2004 documentary "Super Size Me." The film examined the effects of fast food on human health as Morgan Spurlock ate nothing but hamburgers, fries, and the like for an entire month.

Reid, a self-described filmmaker and content creator, will document his journey and post updates on his Instagram page. He’s already raised more than $1,000 on his Kickstarter page to help fund the experiment.

Reid said Taco Bell is one of the few fast-food chains that offers healthier menu items. In 2016, the restaurant announced that 20% of its combo meals would meet nutritional guidelines for calories and fat set out by the federal government in 2020.

Reid said he will try every menu item but will lean heavily on the company’s "Power Menu."

"I thought that if there was any chain that this would be possible with, it’s probably Taco Bell," he continued. 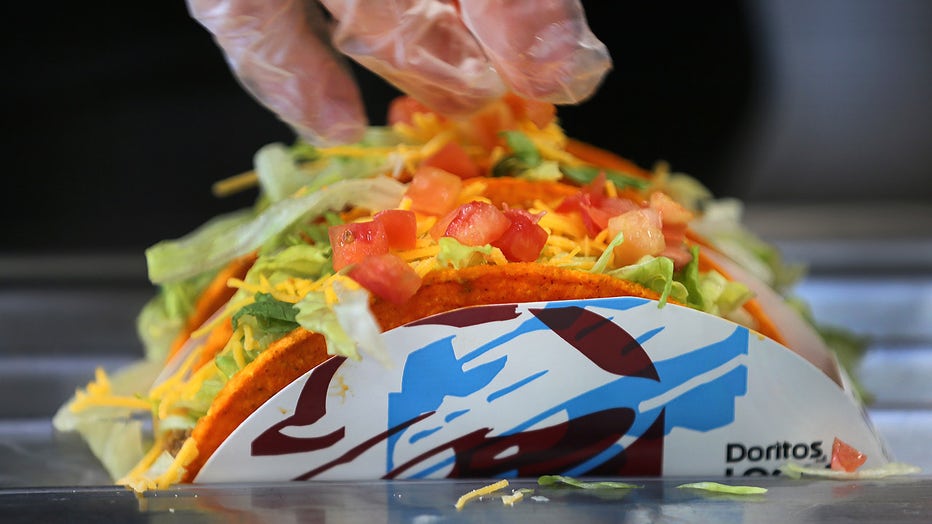 File: Doritos tacos are made at the Taco Bell Cantina in Brookline, MA on Dec. 4, 2020. (Photo by John Tlumacki/The Boston Globe via Getty Images)

Reid said he will keep up with his fitness throughout the experiment, exercising no more than five times a week. He also plans to consult with a dietitian and his primary care doctor throughout the month. Part of his preparation included getting blood work done and taking his blood pressure.

"I thought that if there was any chain that this would be possible with, it’s probably Taco Bell," Reid continued.

But Reid said he wonders how this experiment could negatively affect his overall health.

"I think I’m curious to see what my energy level is like when it comes to working out on a regular basis," he continued, saying he thinks about how easy or not it would be for him to keep up his fitness towards the end of the month.

He’s also curious if he will be sick of Taco Bell by the end of his experiment.

"I feel hopeful and optimistic that this will not dampen my enjoyment of Taco Bell in the future," he added.

FOX Television Stations has reached out to Taco Bell for comment.

Is fast food unhealthy? Yes but...

According to the Cleveland Clinic, fast food can do great harm to your body such as raising blood pressure, cholesterol, and weight gain.

However, it’s not all bad news and there’s a way to make fast food less unhealthy.

A 2019 study out of Harvard emphasized that drive-through fare is pretty unhealthy. But, its lead researcher pointed out, the food can be made healthier, just as long as you strip the sauce and toppings, leaving yourself with a pathetic patty on a bun with a glass of water — to wash the dry mass down.

The study, published in the American Journal of Preventive Medicine, found that at the 34 fast-food chains they analyzed, the average combo meal contains 1,193 calories and that the quantities of sodium, saturated fat, and sugar are through the roof.