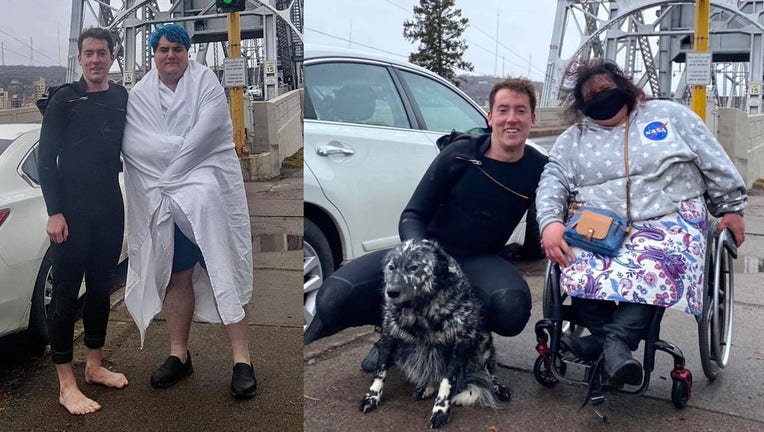 DULUTH, Minn. - A Minneapolis man who was surfing the choppy waters of Lake Superior helped save a man who was struggling in the water while trying to rescue a dog.

Darby Voeks, 26, was about to jump off the pier at Park Point in Duluth on Wednesday to catch one last wave when a woman in a wheelchair rolled up and said she needed help because her 29-year-old aide had gone into the water to rescue her dog. Voeks, who was in a wetsuit, dropped his surfboard and jumped in.

Voeks said the waves were extreme and the man was exhausted. He pulled the man close to the pier ladder, but the man couldn't pull himself up, so Voeks grabbed a life ring on the side of the pier to pull him in.

Then Voeks went after the dog, the Star Tribune reported.

"The dog’s instinct must have totally kicked in. It sat on my legs as I tried to pull myself up and as we got up the cement wall there was Coast Guard and fire department running around," he said. "It’s completely surreal, it still feels surreal."

The rescued man was treated at the scene for possible hypothermia.

"You put yourself at risk to help somebody else," Roeser said. "I don’t know how we didn’t lose somebody or lose a dog."

Voeks, director of community outreach for Richfield Young Life and Hope Church near Minneapolis, said he was glad he decided to go after one more wave.

"I think COVID has shown people can be struggling right next to us," Voeks said. "I was out there having a great time and people were out there struggling for their life."

Duluth sits along the westernmost point of Lake Superior and is about 155 miles (249 kilometers) northeast Minneapolis.

The Milwaukee County Board of Supervisors voted 15-1 on Thursday, March 25 to reduce the county penalty for marijuana possession to $1.

Whether it’s golf, soccer or Nordic skiing, Gavin Chow stays busy. However, as a kid, he was always an arm’s length away from the hospital.