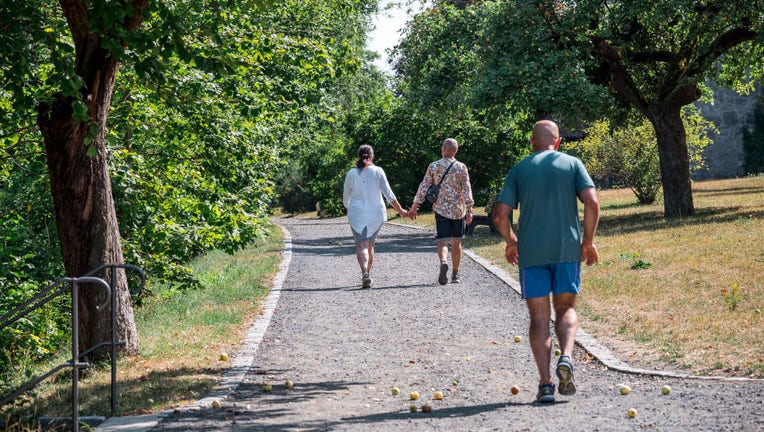 FILE - Two people walk on a pathway with a third person jogging behind. (Photo by Daniel Vogl/picture alliance via Getty Images)

Those who reach between 3,800 and 9,800 steps per day and do so at a higher intensity were found to have a lower risk of developing dementia, according to a new study of older adults in the U.K.

The large cohort study involved nearly 78,500 adults between the ages of 40 and 79 who tracked their steps. It found that adults who took about 9,800 steps per day had a 50% decrease in their dementia risk. Beyond that, the benefits were limited, according to the study.

The researchers estimated the minimum dose to be roughly 3,800 steps per day, which was found to bring a 25% lower risk of dementia.

The average American walks 3,000 to 4,000 steps per day, though that can also vary significantly based on occupation and other factors, according to the Mayo Clinic.

It found that walking with a "purposeful" cadence was most optimal at 6,315 steps and brought a 67% reduction in dementia risk.

The researchers said the optimal peak 30-minute cadence was a quick 112 steps per minute for 30 minutes of a person’s day, and not necessarily consecutively. This was linked to a 62% decrease in dementia risk, according to the study.

"The findings suggest that a dose of just under 10 000 steps per day may be optimally associated with a lower risk of dementia. Steps performed at higher intensity resulted in stronger associations," the researchers concluded.

A combination of physical activity, not smoking, light alcohol consumption, a good diet and cognitive activities may help lower the risk of the disease by as much as 60 percent, a study found.

The research was based on the U.K. Biobank, a large, long-term study of genetic, physical, and health data involving half a million individuals across the United Kingdom. It was led by researchers from the University of Southern Denmark in Odense, Denmark, and the University of Sydney in Camperdown, New South Wales, Australia.

Dementia is not a specific disease but rather a general term for the impaired ability to remember, think, or make decisions — interfering with everyday activities.

Alzheimer’s disease is the most common type of dementia in the United States, according to the U.S. Centers for Disease Control and Prevention. The agency estimates that 5.8 million Americans have Alzheimer’s disease and related dementias, including 5.6 million aged 65 and older and about 200,000 under age 65 with younger-onset Alzheimer’s.

A study published in January found evidence that regular exercise can improve the protection of the brain against dementia. The researchers tracked late-life physical activity in elderly participants and found that people who were more physically active exhibited higher levels of proteins used by the brain to exhibit healthy cognitive function.

A separate study in June in the Journal of the American Medical Association (JAMA) suggested that a decline in an older person’s walking speed could assess the risk of future dementia. The team found that a dual decline in gait and cognitive function compared with non-decliners was significantly associated with an increased risk of dementia.

"Physical activity is a valuable part of any overall body wellness plan and is associated with a lower risk of cognitive decline," the Alzheimer’s Association states on its website. "If it’s safe for you, engage in cardiovascular exercise to elevate your heart rate. This will increase the blood flow to your brain and body, providing additional nourishment while reducing potential dementia risk factors such as high blood pressure, diabetes, and high cholesterol."