As COVID-19 infection rates rise among the young, older individuals are at risk

Reopenings have sparked a surge in new cases among younger individuals in several states.

LOS ANGELES - For the first time in nearly 50 years, older workers face higher unemployment than their midcareer counterparts, according to a study released Tuesday by the New School university in New York City.

The pandemic has wreaked havoc on employment for people of all ages. But researchers found that during its course, workers 55 and older lost jobs sooner, were rehired slower and continue to face higher job losses than their counterparts ages 35 to 54.

It is the first time since 1973 that such a severe unemployment gap has persisted for six months or longer.

AARP said the study bolstered concerns about the economic impact of the virus on on older workers. When people over 50 lose their jobs, it typically takes them twice as long to find work as it does for younger workers, the organization representing the interests of older Americans estimates.

The pandemic "may be something that is pushing people out of the workforce and they may never get back in," said Susan Weinstock, AARP's vice president of financial resilience programing.

In every recession since the 1970s, older workers had persistently lower unemployment rates than midcareer workers — partly because of seniority benefits.

But in the current recession, older workers experienced higher unemployment rates than midcareer workers in each month since the onset of the pandemic.

The older workers’ unemployment rates from April through September were 1.1 percentage points higher than mid-career workers — at 9.7% versus 8.6%. The rates were compiled using a six-month rolling average and were far worse for older workers who are black, female or lack college degrees.

Among the newly unemployed older workers is Legasse Gamo, 65. He was laid off in March from his job as a baggage handler at Reagan National airport in the Washington suburb of Arlington, Virginia.

While Gamo is afraid of exposing himself to the coronavirus by working around others, he said he has looked for work — because he feels he has little choice but to take any job he can find.

The contractor he worked for, Eulen America, has required its laid off employees to reapply for their jobs. Gamo did so but said he has received no reply. 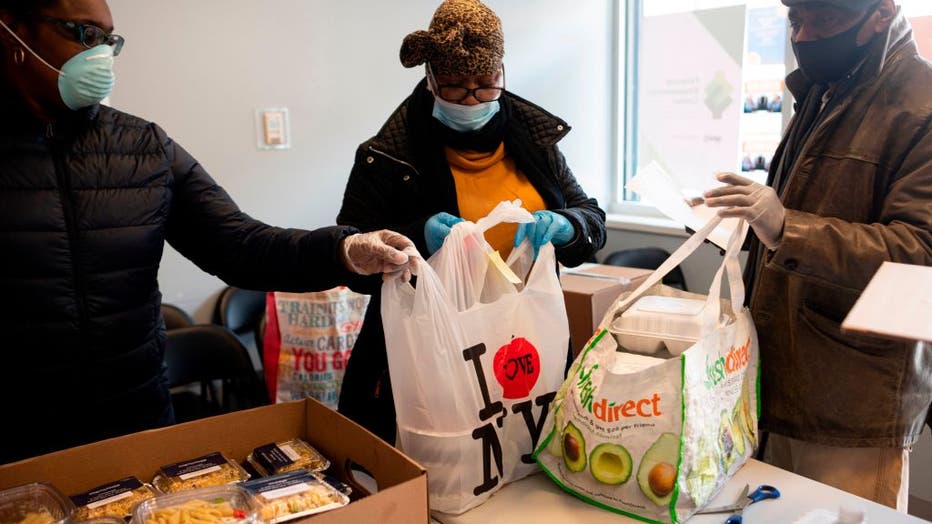 Worker collects meals to be delivered to elderly people who can't pick up food on their own. (Photo by JOHANNES EISELE/AFP via Getty Images)

The immigrant from Ethiopia supports three grandchildren, ages 6, 12 and 14, who live with him. His daughter is still employed, but her pay is not enough to cover their expenses. Gamo gets $210 a week in unemployment insurance payments and said he has spent almost all of his savings.

“I just want to get back to my job as soon as possible to support my family because I’m afraid we will end up homeless,” Gamo said.

The New School study focused only on workers with established careers. As a result, it did not examine workers younger than 35.

It found that the pandemic has posed a unique risk for older workers, said Teresa Ghilarducci, director of the New School's Schwartz Center for Economic Policy Analysis.

“The higher rate of unemployment for older workers might be because this is a once-in-a-lifetime chance for employers to shed older workers and not fear investigation by the labor department," Ghilarducci said.

She added: “Age discrimination rules are not being tightly enforced. Employers, fearing economic instability, may want to get rid of relatively more expensive workers and take their chances with training new workers when the economy recovers.”

Older workers often face age discrimination, making it difficult for them to find jobs. Researchers believe employers laid off and resisted rehiring older adults, in part because they tend to face more serious health risks when infected by the virus.

The unemployment spike for older workers could force more of them into early and involuntary retirement, worsen their financial well-being and exacerbate financial disparities already experienced by women, minorities and people without college degrees in terms of retirement security.

New School researchers estimated that 1.4 million workers over 55 remain lost their jobs since April and remain unemployed. The figure does not include workers who became unemployed in April and left the work force.

The situation could have deep ramifications for older workers close to retirement because their final years on the job are critical for those who have not saved enough for their retirement and expect to work longer to shore up their retirement funds.

“Retirement security is very fragile and a lot of them never recovered from the recession in the first place," said Weinstock, of the AARP. “They were planning on working to make up for money they hadn’t saved and then they aren’t able to make those catch up payments they need."

The Schwartz Center for Economic Policy Analysis at the New School has estimated in research separate from Monday's study that 43 million people now in their fifties and early sixties will be poor when they become elderly because of economic conditions or a lack of adequate savings in retirement plans.

The researchers who conducted the new study recommended that Congress increase and extend unemployment benefits for older workers, discourage withdrawals from retirement accounts, lower Medicare eligibility to 50 and create a federal Older Workers Bureau to promote the welfare of older workers.