Experts say current COVID-19 vaccines will likely work on the new variant of the coronavirus in the United Kingdom, but are working to confirm that with additional testing.

LONDON - A new study has confirmed that a new variant of the novel coronavirus first discovered in the U.K. and since reported in the U.S. is more transmissible than COVID-19 — and the research suggests it’s affecting a greater proportion of young people.

The study, published Dec. 31 in a pre-print by a team from Imperial College London and elsewhere, found that the variant B.1.1.7 is growing rapidly throughout England, where it was first detected in September.

The reproduction number, or "R" number, was estimated to be between 1.4 and 1.8 for the new variant in the study. This measure indicates the number of people one infected person will pass the virus to, on average.

"These analyses, which have informed U.K. government planning in recent weeks, show that the new variant of concern, B.1.1.7, has substantially higher transmissibility than previous SARS-CoV-2 viruses circulating in the U.K.," said study author Prof. Neil Ferguson of Imperial College London.

"This will make control more difficult and further accentuates the urgency of rolling out vaccination as quickly as possible," Ferguson added.

Researchers also found that individuals under the age of 20 make up a higher percentage of B.1.1.7 cases, identified in the study as the "Variant of Concern (VOC)." But study authors said it remains too soon to determine the "mechanism behind this change," noting that it could have been partly influenced by "the variants spread coinciding with a period where lockdown was in force but schools were open."

The study has not yet been peer-reviewed, and researchers said further research is needed.

The variant has since been reported in the U.S. and Canada, with cases reported in states like California, Colorado and Florida. Most recently, the strain was identified in a man in New York with no recent travel history, suggesting his case appeared to be from community spread.

Scientists believe current vaccines will still be effective against the variant, but additional research is needed. Vaccines induce broad immune system responses besides just prompting the immune system to make antibodies to the virus, so they are expected to still work.

But still, researchers said the variant’s higher transmissibility underscores the need for strong social distancing measures and vaccine distribution as quickly as possible.

"All viruses evolve, and very rarely a virus will change in a way that requires us to re-evaluate public health policy. We find overwhelming evidence of a change in transmissibility of the B.1.1.7 variant that should be taken into account when planning our COVID-19 response in the new year," added study author Dr. Erik Volz of Imperial College London.

New COVID-19 infections in the U.K. have soared in recent weeks as public health officials struggled to contain the new variant, which the government has also said is more contagious. A new national lockdown was issued this week for England until at least mid-February in an effort to combat the fast-spreading variant. 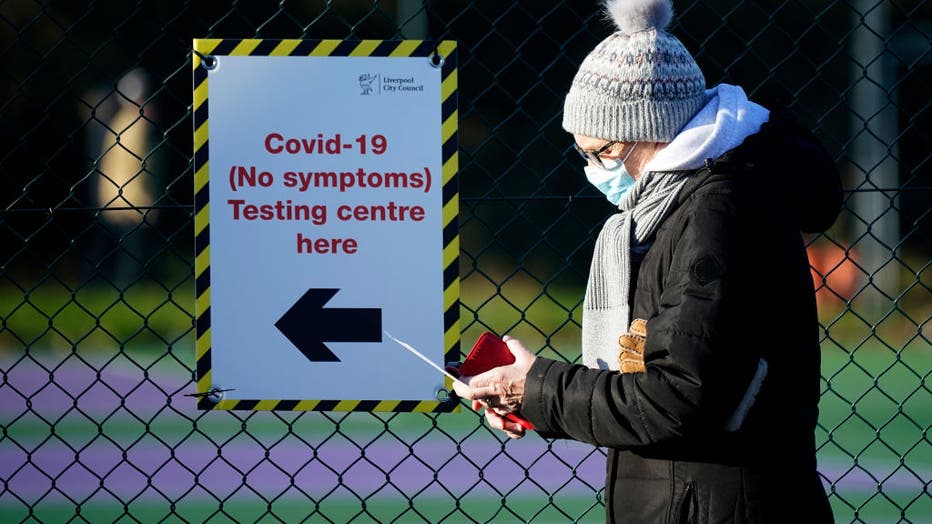 Members of the public wait in line at a COVID-19 testing site in the Liverpool Tennis centre at Wavertree Sports Park on Jan. 5, 2021 in Liverpool, United Kingdom. The Prime Minister yesterday announced a new lockdown with tougher Covid-19 measures f

On Jan. 4, there were 26,626 COVID patients in hospitals in England — an increase of more than 30% from a week ago and 40% above the highest level of the first wave in the spring.

Authorities have recorded more than 50,000 new infections a day since passing that milestone for the first time on Dec. 29. The U.K. has also reported more than 75,500 virus-related deaths, one of the worst in Europe.

Adding cause for concern is a third South African variant that has also been detected in the U.K., which scientists have expressed worry about the reliability of current vaccines against it. Genomic studies for this variant, named 501Y.V2, are now underway.