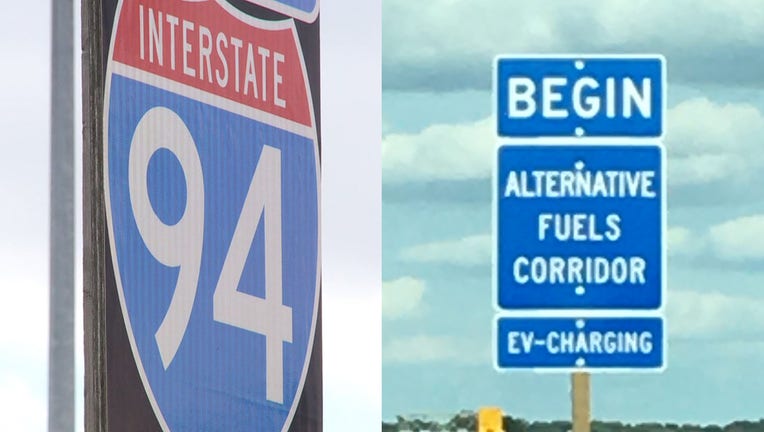 MADISON, Wis. - The Wisconsin Department of Transportation (WisDOT) on Friday, Oct. 9 announced the placement of new signs along I-94 that designate the highway as an alternative fuel corridor.

Motorists driving along I-94 between the Wisconsin-Illinois border and Madison will now see the signs, which indicate that the route has readily-available electric charging stations. The stations are part of a national network of corridors that support alternative fueling infrastructure.

"This is an important step in developing the transportation system of tomorrow,” Gov. Tony Evers said. "As a state, we must continue our efforts to encourage the use of vehicles that run on clean, alternative fuels."

As a part of the Fixing America’s Surface Transportation (FAST) Act, the Federal Highway Administration (FHWA) called on states to nominate alternative fuel corridors -- or AFCs -- along major roadways.

Currently, more than 145,222 miles of the National Highway System are designated as AFCs.

There are two designation types available for a given corridor:

The section of I-94 is the first in Wisconsin designated as corridor-ready. Uniform signage has been developed to identify the start and end points of the designated alternate fuel corridors, so travelers can look for a consistent reference point.

The signs indicate that a DC Faster Charger (DCFC) is available at least every 50 miles, and no more than 5 miles off the Interstate, along this 110-mile section of I-94.

“The signage is key to informing current electric car owners, as well as those considering electric car purchase, of the opportunity to fuel up when needed,” WisDOT Secretary-designee Craig Thompson said. “Easy access to fuel is critical to expanding electric vehicles from local use to cross-country travel for private and corporate use.”

The new signs are designed to label the corridor, but not necessarily direct motorists to specific refueling stations.

To find specific electric vehicle charging stations in the state, and along I-94, drivers are encouraged to use the U.S. Department of Energy’s Alternative Fueling Station Locator.

WisDOT is working with the Wisconsin Public Service Commission and the Department of Administration to coordinate state efforts that will support the use of alternative fuels.

More information can be found on WisDOT’s Alternative Fuel webpage.