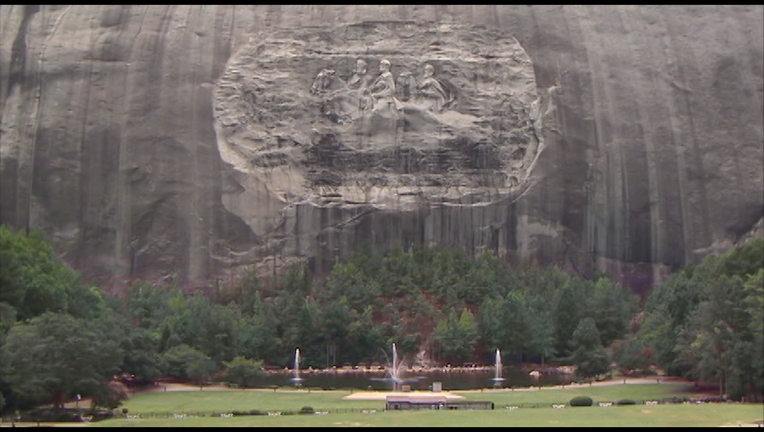 STONE MOUNTAIN, Ga. - The board that oversees a park near Atlanta voted Monday for a new logo that excludes the park’s giant mountainside carving of Confederate leaders.

It’s another change by the Stone Mountain Memorial Association to address criticism of the park’s Confederate legacy and shore up its finances.

The board voted in May to relocate Confederate flags from a busy walking trail up the side of the mountain and create a museum exhibit that acknowledges the site’s connection to the Ku Klux Klan.

The previous logo included a picture of the famous carving of Confederate President Jefferson Davis and generals Stonewall Jackson and Robert E. Lee. The new logo includes an image of a lake inside the park and a side of the mountain where the carving isn’t visible.

Critics have called on the board to remove the colossal sculpture from the mountain’s northern face. Completed in 1972, it measures 190 feet across and 90 feet tall. It is the largest Confederate monument ever crafted and has special protection in Georgia law.

The changes come amid a national reckoning on race that brought down dozens of Confederate monuments last year.

Work on the Stone Mountain sculpture languished until the state bought the mountain in 1958 for a park. Finishing the monument gained renewed urgency amid resistance from Georgia and other Southern states to the civil rights movement and efforts to end segregation.

Today, the park 15 miles northeast of downtown Atlanta markets itself as a family theme park rather than a monument to the Confederacy.

The exhibit approved by the board is supposed to tell the history of the carving, including its roots in efforts to maintain segregation. It will also reflect the site’s role in the rebirth of the Ku Klux Klan. The group marked its comeback with a cross-burning ceremony atop the mountain on Thanksgiving night 1915.

Bill Stephens, Stone Mountain Memorial Association’s CEO, has said the seven-member committee tasked with creating the exhibit will include community leaders and historians. The original plan was for the team to be assembled before Monday’s meeting, but that did not happen.

News outlets reported that Stephens said Monday that the memorial association is in "final discussions" with two historians and an announcement could be made within about two weeks.

"We’re still working on that, and hopefully in the near future we’ll have everybody in place to go forward," board chair Rev. Abraham Mosley said.