Speaking up for Special Needs: Kids with disabilities dying despite repeated reports of abuse, neglect

Speaking up for Special Needs: Kids with disabilities dying despite repeated reports of abuse, neglect

MILWAUKEE —  A FOX6 investigation has found that in Wisconsin, children with disabilities are dying at alarming rates, despite numerous reports to Child Protective Services about their welfare.

Since 2010, when  something really awful happens to a kid in Wisconsin, the law requires county welfare agencies publish a report about what happened and how it happened. They are called 90-day Summary Reports and they are only  completed when a child dies or is seriously injured. Since 2010, 554 90-Day Summary reports have been published.

We read every single report.

We found that 15 kids with disabilities have died from child abuse or neglect. Nine suffered serious injuries. In all but two of those cases concerns had previously been reported to Child Protective Services. 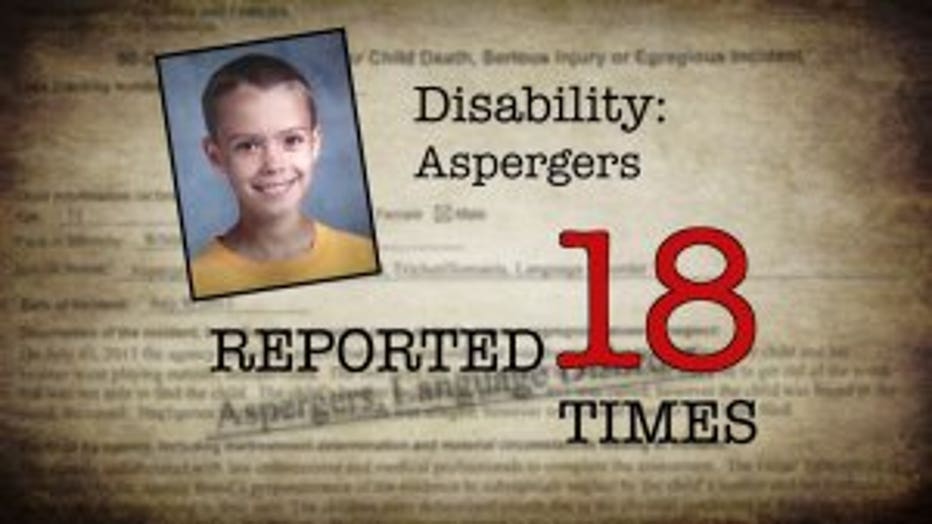 Four-year-olds Adrian and Alexis died in a fire, after their mom locked them in a room while she went to work. They had cerebral palsy and autism. Abuse or neglect had been reported nine times.

Six-year-old Raul was hit by a school bus. He had autism.  Child abuse and neglect has been reported nine times.

11-year-old Jacob fell into a pond, while playing outside unsupervised.  He had Asperger syndrome. Abuse or neglect had been reported 18 times.

The stories are heartbreaking: An autistic boy drowned while his mom got high; a toddler with cerebral palsy overdosed on morphine; a little girl starved, locked in the basement; a blind, immobile 6-year-old was left in a scalding hot bath. Their families had all been reported for either child abuse or neglect multiple times. 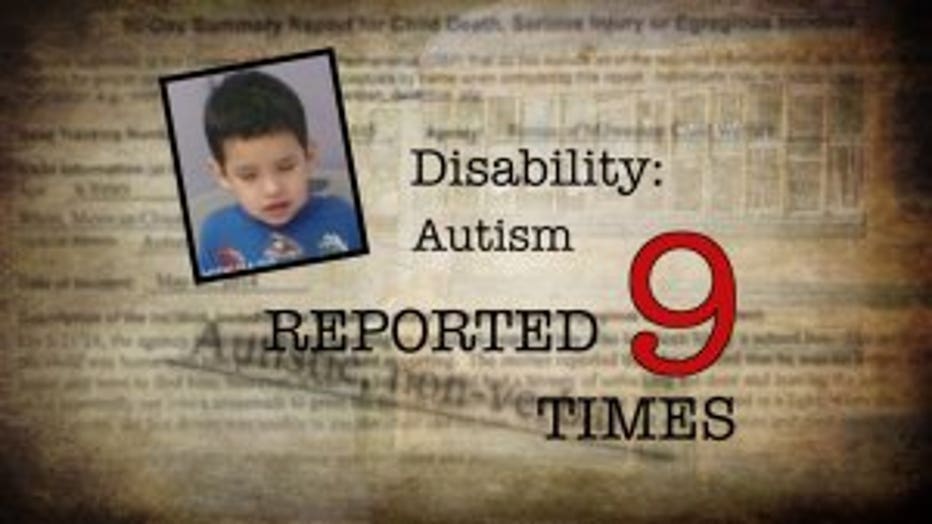 "Until something bad happened, nothing was done," Pugh says. "How did the system break down here, why did it break down?"

We showed our findings to Pugh at Disability Rights Wisconsin.

"We were shocked and it kind of kicked us into action," she says.

Remember the autistic teenager in Brookfield who was locked in her basement without access to running water?

"That's the sort of case where we say we should have been able to do something sooner," Pugh says.

She would show up at school covered in human feces. Her family was reported for child abuse, neglect, and sexual assault 40 times. But she suffered for eight years before the Waukesha County Department of Health and Human Services substantiated child neglect and prosecutors finally filed charges.

"It reads as if there is a system failure there," Pugh says. 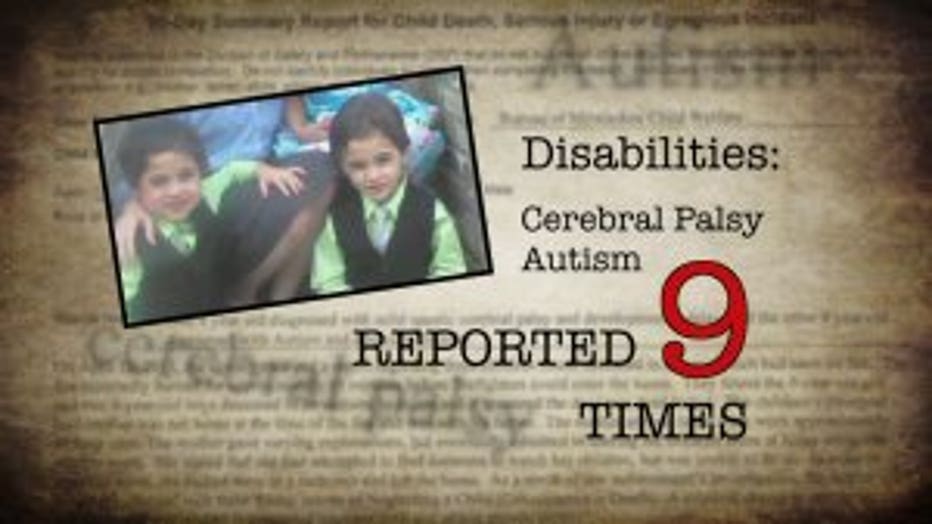 So why is this happening? Why are these kids still suffering even after concerns are reported, sometimes dozens of times, to Child Protective Services?

Because many of them are voiceless.

"Kids with autism, kids with down's syndrome and other intellectual disabilities will have a hard time explaining what happened to them. Sometimes they have very little speech," Pugh says.

If they can't talk, our research shows, investigations are more likely to be closed or never even opened in the first place.

"It appears that clearly there's no one in the room or required to be part of that investigative process that would have any level of expertise in communicating with a child with a disability that has difficulty communicating," Pugh says. 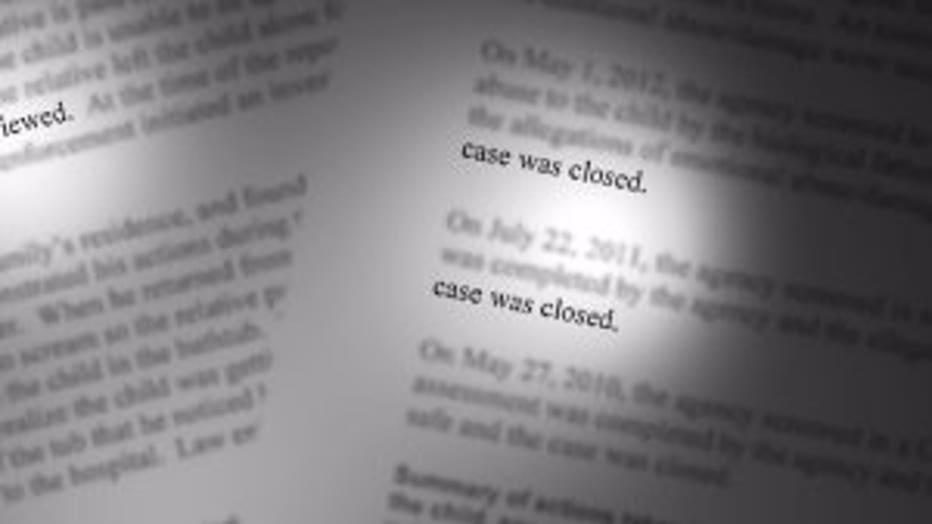 The girl who lived in this basement is  a prime example.

Police reports state she was "not a good candidate for a forensic interview."

Even though she told her teacher at school that her mom and stepfather hit her, and her teacher told police she felt the student was being abused, the investigation was closed.

When detectives talked to the child at her school, she tried to change the subject, was unable to focus, and was fidgeting. 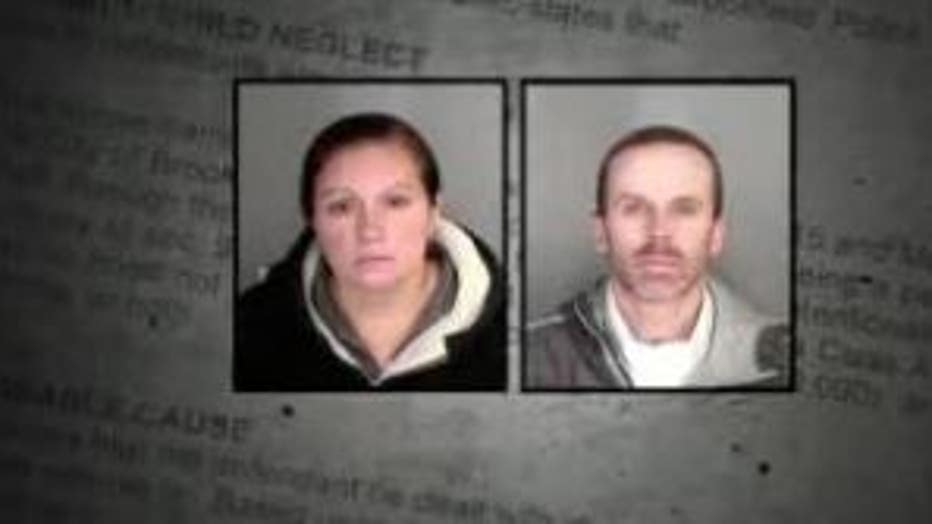 Alicyn and Patrick Keller face neglect charges. Their family was reported 40 times to county welfare agencies over an 8 year period.

Police reports say it was difficult to effectively communicate with the child. But that's no surprise, experts say, because she was an autistic child who was experiencing trauma.

"Sometimes it's not just about how you ask the question or what question you ask," Pugh says. "It's about the fact that this child uses symbols to communicate. Or they use sign language, but it's modified sign language or gestures. So it's not something that any level of very basic or generic training is going to necessarily prepare that interviewer for."

The Wisconsin Department of Children and Families would not sit down with us to discuss our findings.  Joe Scialfa, the department's spokesperson, told us child welfare workers do have access to training, but he did not know if that training was mandatory in every county.

Citing privacy concerns, he wouldn't tell us if specialists were brought in in any of the cases we looked at. We found speech pathologists are not routinely consulted in cases where kids have trouble communicating, and that's something Disability Rights Wisconsin says is a big problem.

We also know in some of these cases where disabled children died, county agencies admit their workers improperly assessed whether kids were in danger.

"I would say in looking at how other states support children with disabilities in the investigative process, we have room for improvement," Pugh says.

Scialfa pointed out that children with disabilities appear to be under-represented in the egregious incident reports. He says child welfare workers can only use the best judgment they have at the time a decision is made, and sometimes, even with the  best intentions, bad things happen. That's painful for everyone involved, he says, especially the social workers.