The Falcon 9 rocket thundered into the night from Kennedy Space Center with three Americans and one Japanese, the second crew to be launched by SpaceX.

CAPE CANAVERAL, Fla. - SpaceX launched four astronauts to the International Space Station on Sunday on the first full-fledged taxi flight for NASA by a private company.

The Falcon 9 rocket thundered into the night from Kennedy Space Center with three Americans and one Japanese, the second crew to be launched by SpaceX. The Dragon capsule on top -- named Resilience by its crew in light of this year's many challenges, most notably COVID-19 -- was due to reach the space station late Monday and remain there until spring.

Sidelined by the virus himself, SpaceX founder and chief executive Elon Musk was forced to monitor the action from afar. He tweeted that he "most likely" had a moderate case of COVID-19. NASA policy at Kennedy Space Center requires anyone testing positive for coronavirus to quarantine and remain isolated.

Overnight, the Crew Dragon capsule ran into a few issues. Officials found some problems with propellant heaters and the capsule's temperature. Both issues have since been fixed and officials said that the crew was never in any danger.

The crew is expected to reach the International Space Station by 11 p.m. EST on Monday.

Sunday's launch follows by just a few months SpaceX's two-pilot test flight. It kicks off what NASA hopes will be a long series of crew rotations between the U.S. and the space station, after years of delay. More people means more science research at the orbiting lab, according to officials.

"This is another historic moment," NASA Administrator Jim Bridenstine said Friday. But he noted: "Make no mistake: Vigilance is always required on every flight."   The flight to the space station -- 27 1/2 hours door to door -- should be entirely automated, although the crew can take control if needed. 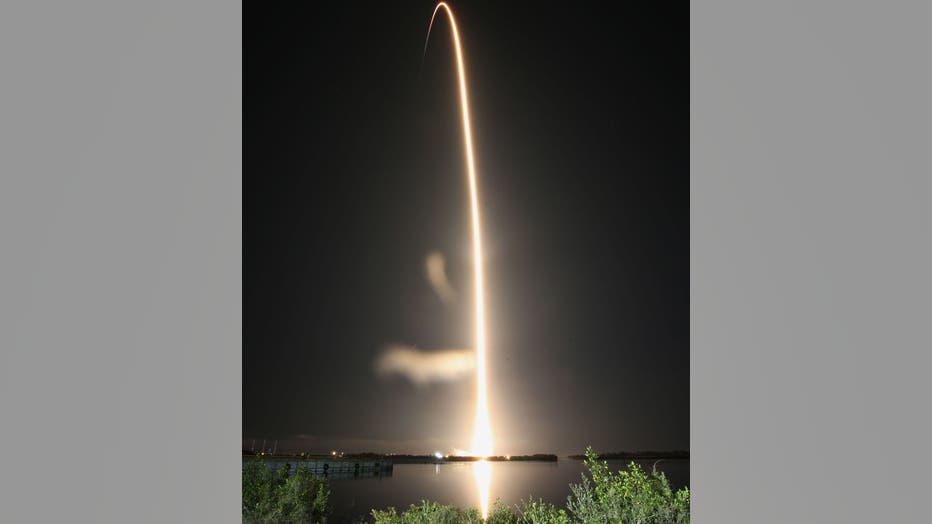 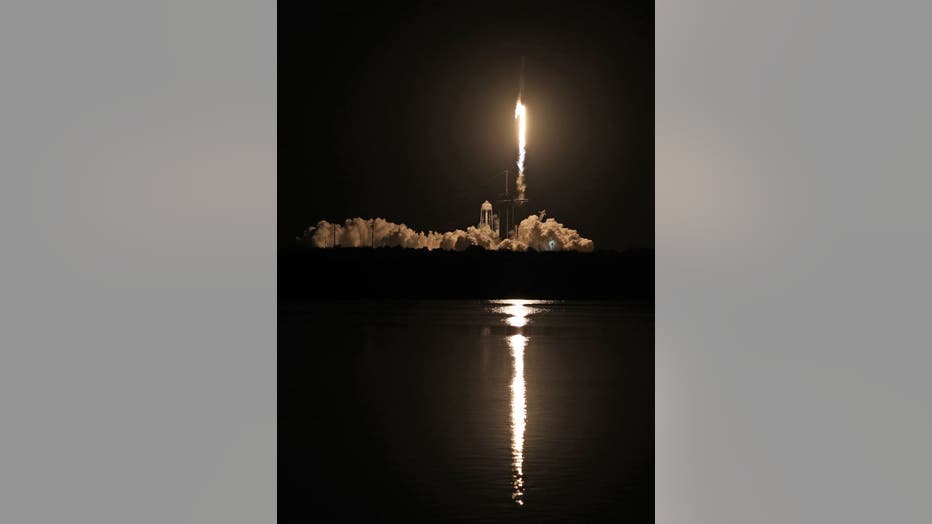 With COVID-19 still surging, NASA continued the safety precautions put in place for SpaceX's crew launch in May. The astronauts went into quarantine with their families in October. All launch personnel wore masks, and the number of guests at Kennedy was limited. Even the two astronauts on the first SpaceX crew flight stayed behind at Johnson Space Center in Houston.

Vice President Mike Pence, chairman of the National Space Council, traveled from Washington to watch the launch. He gave his congratulations to the crew on Twitter and added that "launch of the Resilience Spacecraft is the culmination of four years of renewed leadership in Space. It’s a tribute to the courage of our astronauts, the ingenuity of the men and women of NASA, and SpaceX, and the unrelenting vision of President Donald Trump."

Outside the space center gates, officials anticipated hundreds of thousands of spectators to jam nearby beaches and towns.

NASA worried a weekend liftoff -- coupled with a dramatic nighttime launch -- could lead to a superspreader event. They urged the crowds to wear masks and maintain safe distances. Similar pleas for SpaceX's first crew launch on May 30 went unheeded.

Thousands have gathered along the Space Coast to witness the SpaceX Crew-1 mission launch.

The three-men, one-woman crew led by Commander Mike Hopkins, an Air Force colonel, named their capsule Resilience in a nod not only to the pandemic but also racial injustice and contentious politics. It's about as diverse as space crews come, including physicist Shannon Walker, Navy Cmdr. Victor Glover, the first Black astronaut on a long-term space station mission, and Japan's Soichi Noguchi, who became the first person in almost 40 years to launch on three types of spacecraft. 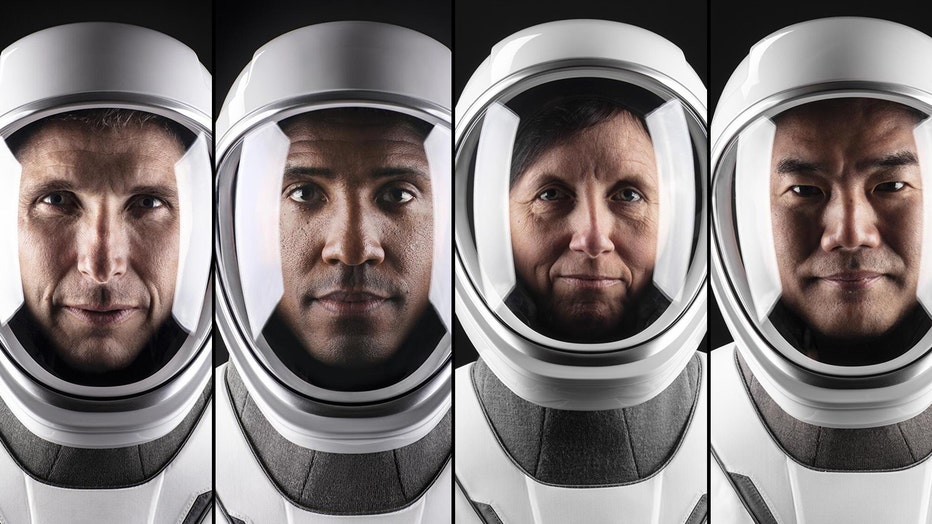 They rode out to the launch pad in Teslas -- another Musk company -- after exchanging high-fives and hand embraces with their children and spouses, who huddled at the open car windows. Musk was replaced by SpaceX President Gwynne Shotwell in bidding the astronauts farewell. 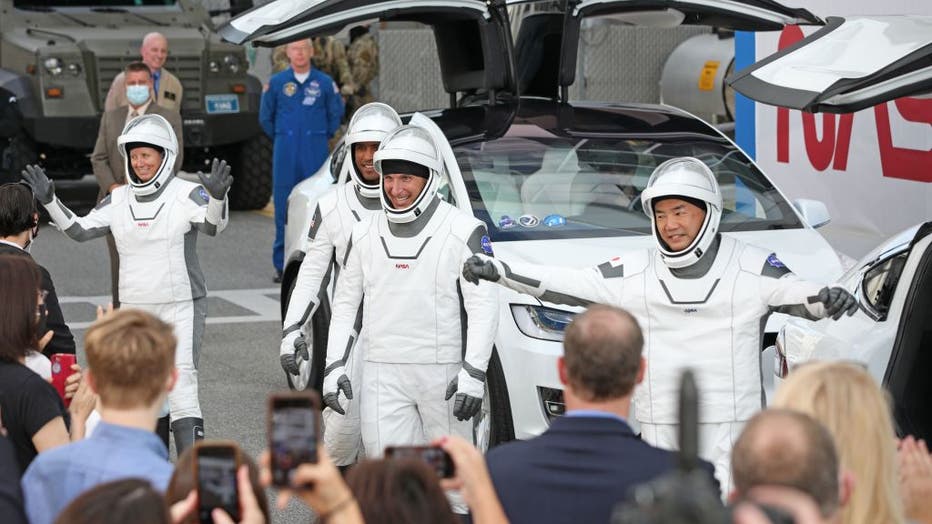 Crew-1 mission astronauts walk out of the Neil A. Armstrong Operations and Checkout Building en route to launch complex 39A at the Kennedy Space Center in Florida on November 15, 2020 with (from L-R) NASA astronauts Shannon Walker, Victor Glover, Mic

Besides its sleek design and high-tech features, the Dragon capsule is quite spacious -- it can carry up to seven people. Previous space capsules have launched with no more than three. The extra room in the capsule was used for science experiments and supplies.

FOX 35 News spoke with one of the NASA astronaut trainers about what it was like for the crew to prepare for the G-force pressure.

“So everyone’s been able to handle it really well. We haven’t had anyone get sick, and all of the astronauts come away from it feeling like they’re that much more prepared for launch day," said NASA trainer Samantha Testa.

This will increase the regular crew size of the space station’s expedition missions from six to seven astronauts, adding to the amount of crew time available for research.

The launch has previously been described as a transitional launch, as the Kennedy Space Center becomes the base for routine launches to the International Space Station (ISS) and hopefully commercial flights.

When the crew arrived at Cape Canaveral last week, they expressed their excitement and readiness for the launch.

Mike Hopkins said "we’re ready. We spent the last couple of weeks fine-tuning our training. And we’ve also had the opportunity to spend a little time at home with our families. And we’re are truly honored to be apart of this transition.”

Victor Glover said that "we have this great mission ahead of us and we all look forward to getting into orbit and make you really proud of us.”

JAXA's Soichi Noguchi expressed that "We go to space with pride. Our name is Resilience. Resilience is power to recover, will to restore, and strive to survive.”

Shannon Walker, who has never launched from Kennedy Space Center before, said that "I’m just so happy to be here, in Florida, getting ready for this launch.”

The crew arrived at Kennedy Space Center in Cape Canaveral on Sunday afternoon.

Another reason to celebrate this mission: Walker will be the first female astronaut to lift off from American soil since the shuttle mission ended.

BREAKING NEWS ALERTS: Download the FOX 35 news app for the breaking news as it happens and more

The four astronauts will be joining two Russians and one American who flew to the space station last month from Kazakhstan.   The first-stage booster -- aiming for an ocean platform several minutes after liftoff -- is expected to be recycled by SpaceX for the next crew launch. That's currently targeted for the end of March, which would set up the newly launched astronauts for a return to Earth in April. SpaceX would launch yet another crew in late summer or early fall.

SpaceX and NASA wanted the booster recovered so badly that they delayed the launch attempt by a day, to give the floating platform time to reach its position in the Atlantic over the weekend following rough seas.

Boeing, NASA's other contracted crew transporter, is trailing by a year. A repeat of last December's software-plagued test flight without a crew is off until sometime early next year, with the first astronaut flight of the Starliner capsule not expected before summer.

NASA turned to private companies to haul cargo and crew to the space station after the shuttle fleet retired in 2011. SpaceX qualified for both. With Kennedy back in astronaut-launching action, NASA can stop buying seats on Russian Soyuz rockets. The last one cost $90 million.

WEATHER ALERTS: Download the FOX 35 Weather App to track the tropics on your phone, receive severe weather alerts, and get the latest daily forecasts

The commander of SpaceX's first crew, Doug Hurley, noted it's not just about saving money or easing the training burdens for crews.

"Bottom line: I think it's just better for us to be flying from the United States if we can do that," he told The Associated Press last week.

The Associated Press Health and Science Department receives support from the Howard Hughes Medical Institute's Department of Science Education. The AP is solely responsible for all content.