LOS ANGELES - Snapchat announced new tools and features aimed at empowering its young users to vote and learn about their voting options — including a new feature that allows people to register to vote directly in the app.

The announcement was made on Aug. 6 to coincide with the anniversary of the landmark Voting Rights Act of 1965, which outlawed racial discrimination in voting in the U.S.

Snapchat said it plans to launch four new, election-related features by early September, according to a spokesperson.

Earlier this year, Snapchat announced a new feature called “Minis” that allows third-party developers to build utilities directly into the social media platform. As part of this feature, a new "Voter Registration Mini" will allow users to register to vote directly in Snapchat, in a partnership with the online tool TurboVote that aims to streamline the process. It will also include a tracker to monitor how many users have registered to vote on Snapchat.

A new “Voter Guide” will provide resources on topics like voting by mail, ballot education, voter registration, accessibility and voter suppression, in an effort to “help make voting more accessible for all groups who have been historically disenfranchised,” the company said. The guide is available by keyword search and will feature content from the NAACP, ACLU, BallotReady, DemocracyWorks, APIA Vote, I am a Voter, Vote Early Day, National Voter Registration Day and more. 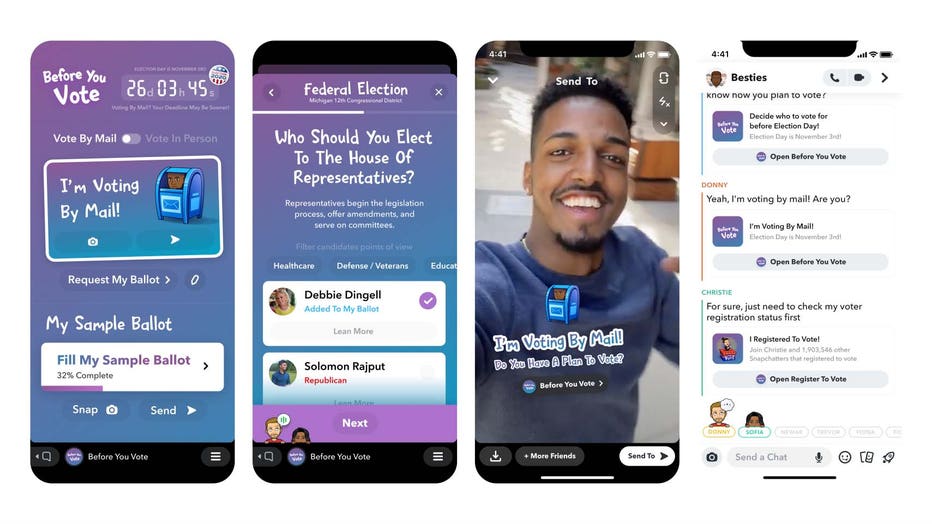 Additionally, a new “Before You Vote Mini” will educate users on options to vote safety amid the coronavirus pandemic; provide tools to fill out a sample ballot ahead of election day; and allow individuals to look up their polling location.

In 2018, Snapchat said it helped more than 450,000 users register to vote, with 57% of those newly registered actually casting their ballot. Part of that effort included an activity card on user profiles to remind them of everything they needed to do to register. For 2020, Snapchat is launching a new voter checklist portal that will live on each user’s profile, serving as a checklist that can help them register, look up their ballot, and make a plan to vote.

“We believe we have a responsibility to tackle these challenges by investing in products and partnerships designed to empower first-time and young voters, a traditionally disenfranchised population when it comes to voting,” the company said.

Facebook launched a “Voting Information Center” on both Facebook and Instagram as part of its widespread effort to boost voter turnout in the U.S. and provide authoritative information about voting.

TikTok, the Chinese-owned video platform which has been under intense U.S. government scrutiny, said it would add new rules to combat misinformation and foreign interference.