WASHINGTON — The federal government was expected to remain partially shut down well into Christmas as the standoff deepened Saturday over President Donald Trump's demand for funds to build a border wall with Mexico.

With President Trump's insistence on $5 billion for the wall and negotiations with Democrats in Congress far from a breakthrough, even a temporary measure to keep the government running while talks continued seemed out of reach until the Senate returned for a full session Thursday.

From coast to coast, the first day of the shutdown played out in uneven ways. The Statue of Liberty was still open for tours, thanks to funding from New York state, and the U.S. Post Office was still delivering mail, as an independent agency.

Yet the disruption affected many government operations and the routines of 800,000 federal employees. Roughly 420,000 workers were deemed essential and were expected to work unpaid. An additional 380,000 were to be furloughed, meaning they will stay home without pay. The Senate had already passed legislation ensuring that workers will receive back pay, and the House was likely to follow suit. 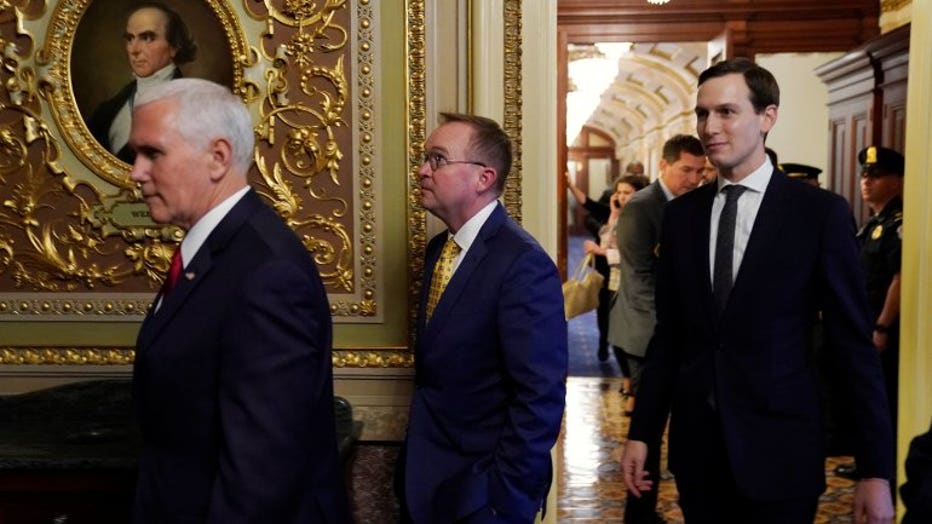 )Lawmakers are expected to convene Saturday on Capitol Hill, as a plan to fund the government has yet to come to fruition. This comes just a day after members of Congress and President Donald Trump failed to come to an agreement on a deal, resulting

No one knew how long the closures would last. Unlike other shutdowns, this one seemed to lack urgency, coming during the long holiday weekend after President Trump had already declared Monday, Christmas Eve, a federal holiday. Rather than work around the clock to try to end the shutdown, as they had done in the past, the leaders of the House and the Senate effectively closed up shop. But they didn't rule out action if a deal were struck.

"Listen, anything can happen," Senate Majority Leader Mitch McConnell told reporters after he closed the Senate's rare Saturday session hours after it opened.

But after ushering Vice President Mike Pence through the Capitol for another round of negotiations, the Republican chairman of the Appropriations Committee, Sen. Richard Shelby of Alabama, said a quick end to the shutdown was "not probable."

At the White House, President Trump hosted a lunch Saturday with conservative lawmakers, including House Freedom Caucus chiefs Mark Meadows of North Carolina and Jim Jordan of Ohio, and several senators. Absent from the guest list were GOP leaders or any Democrats, who would be needed for a deal.

"I am in the White House, working hard," tweeted the president, who canceled his Florida holiday getaway to his club Mar-a-Lago due to the shutdown. First lady Melania Trump was flying back to Washington to be with her husband.

President Trump's re-election campaign sent out a fundraising email late Saturday launching what he called "the most important membership program ever - the OFFICIAL BUILD THE WALL MEMBERSHIP." The president urged donors to sign up.

With Democrats set to take control of the House on Jan. 3, and Speaker Paul Ryan on his way out, the shutdown was providing a last gasp of the conservative majority before the new Congress.

President Trump savored the prospect of a shutdown over the wall for months. Last week he said he would be "proud" to close down the government. He had campaigned on the promise of building the wall, and he also promised Mexico would pay for it. Mexico has refused to do so.

In recent days, though, President Trump tried to shift blame to Democrats for not acceding to his demand. He has given mixed messages on whether he would sign any bill into law.

After the luncheon at the White House, Sen. Lindsey Graham, R-S.C., said, "It's clear to me he believes the additional funding is necessary."

Senate Democratic leader Chuck Schumer of New York met with Pence on Saturday at the request of the White House, according to Schumer's office. But the senator's spokesman said they remained "very far apart" on a spending agreement.

Schumer said the "Trump shutdown" could end immediately if the president simply dropped his demand for money. "If you want to open the government, you must abandon the wall," Schumer said.

Democrats said they were open to other proposals that didn't include the wall, which Schumer said was too costly and ineffective. They have offered to keep spending at existing levels of $1.3 billion for border fencing and other security.

But President Trump, digging in, tweeted about "the crisis of illegal activity" at American's southern border is "real and will not stop until we build a great Steel Barrier or Wall."

Republican leaders largely stayed in the background of the negotiations. McConnell acknowledged that any deal to reopen government would require Democratic support for passage and the president's signature.

Senators approved a bipartisan deal earlier in the week to keep the government open into February and provide $1.3 billion for border security projects, but not the wall. But as President Trump faced criticism from conservatives for "caving" on a campaign promise, he pushed to House to approve a package temporarily financing the government but also setting aside $5.7 billion for the border wall.

A test vote in the Senate on Friday showed that Republicans lacked the 60 votes needed to advance the House plan.

Pelosi, poised to become speaker, said in a letter to colleagues Saturday that "until President Trump can publicly commit to a bipartisan resolution, there will be no agreement before January when the new House Democratic Majority will swiftly pass legislation to re-open government."

The impasse blocked money for nine of 15 Cabinet-level departments and dozens of agencies, including the departments of Homeland Security, Transportation, Interior, Agriculture, State and Justice.

Those being furloughed included nearly everyone at NASA and 52,000 workers at the Internal Revenue Service. About 8 in 10 employees of the National Park Service were to stay home; many parks were expected to close.

Some agencies, including the Pentagon and the departments of Veterans Affairs and Health and Human Services, were already funded and will operate as usual. Also still functioning were the FBI, the Border Patrol and the Coast Guard. Transportation Security Administration officers continued to staff airport checkpoints and air traffic controllers were on the job.

Many of Congress' most conservative Republicans welcomed such a confrontation, but most GOP lawmakers wanted to avoid one because polling showed the public opposed the wall and a shutdown over it.

Sen. Lamar Alexander of Tennessee said, "This is a complete failure of negotiations and a success for no one."