MILWAUKEE -- Milwaukee Sheriff David Clarke has withdrawn his name from consideration for an assistant secretary position at the Department of Homeland Security, an adviser to Clarke confirmed to Washington Post on Saturday, June 17th.

FOX6 News has obtained a statement from Craig Peterson, an adviser to Clarke:

"Late Friday Milwaukee County Sheriff David Clarke, Jr. formally notified Secretary of Homeland Security John Kelly, that he had rescinded his acceptance of the agency's offer to join DHS as an assistant secretary.

Sheriff Clarke is 100% committed to the success of President Trump, and believes his skills could be better utilized to promote the President's agenda in a more aggressive role.

Last Tuesday Sheriff Clarke met with President Trump and discussed other roles where the Sheriff could be of greater assistance to the President, and the Country.  The Sheriff is reviewing options inside and outside of government.

Sheriff Clarke told Secretary Kelly he is very appreciative of the tremendous opportunity the Secretary was offering, and expressed his support for the Secretary and the agency.” 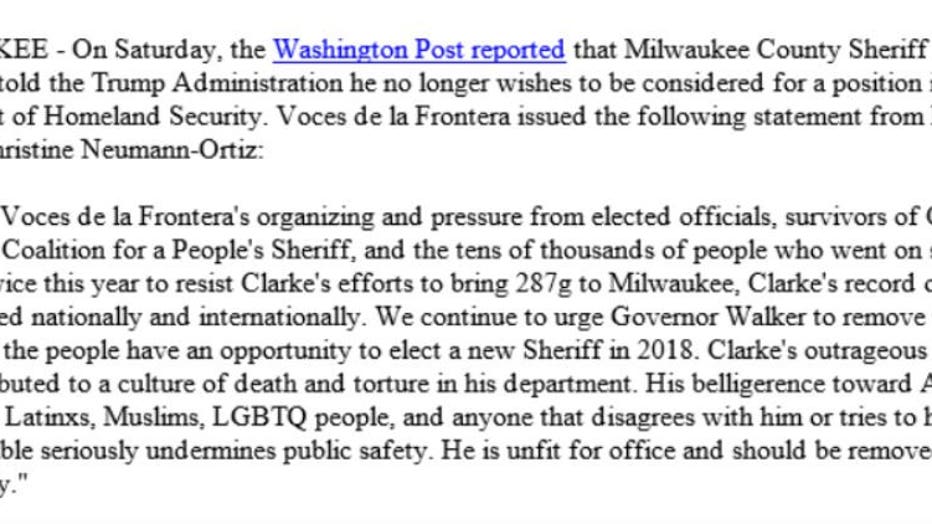 Clarke announced on May 17th that he would resign in June so he could accept a position in President Donald Trump's administration.

After Clarke made his announcement on May 17th, DHS officials tweeted the following: