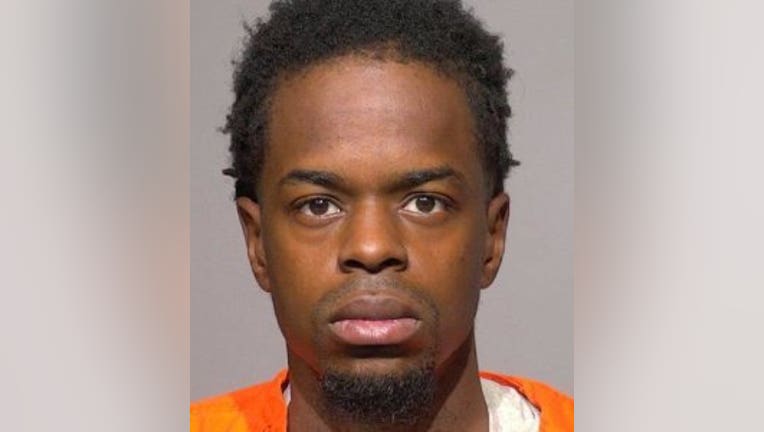 MILWAUKEE -- A convicted felon admitted to fatally shooting a 19-year-old man near 29th Street and State Street on the afternoon of Thursday, April 23, before leading police on a short pursuit -- telling investigators a woman he was with at the time of the shooting set the victim up to be robbed, according to prosecutors.

Michael Jones, 28, of Milwaukee, faces four charges for the shooting that happened around 2:30 p.m.:

According to a criminal complaint, officers found the victim lying on the ground at the scene, suffering from multiple gunshot wounds. He was pronounced dead at the hospital. An autopsy revealed he suffered a total of seven gunshot wounds -- including three to the head, and one to the chest.

A witness told investigators he had been parked in the area and saw a Chrysler Sebring pull up. A man exited the front passenger seat, walked south on 29th Street, and raised his hand, holding a handgun, firing once at the backseat passenger, who then began running, holding his face. The victim fell, and the witness said the shooter ran toward him -- firing three more times as he stood over the victim. The shooter then returned to the vehicle -- where a woman exited the driver's seat, the shooter entered the driver's seat -- and the vehicle left the scene.

The victim's brother told investigators about a hour or so before the shooting, he saw his brother and his brother's girlfriend enter a red convertible with a tan top. He said that vehicle later returned, and pointed out where it was parked -- near 45th Street and Meinecke Avenue.

Officers observing the vehicle around 5 p.m. the day of the shooting spotted a black GMC that pulled up with a man and woman inside. When officers activated lights and sirens, the driver of the GMC accelerated away, the complaint said, leading a 1.1-mile pursuit reaching speeds in excess of 70 miles per hour. Prosecutors said Jones admitted he was driving during the pursuit -- the GMC blowing multiple stop signs/red lights -- striking a pole and an unoccupied vehicle on 52nd Street.

Near 52nd Street and Hadley Street, the complaint said officers observed a bag being thrown from the passenger window before the vehicle collided with an unoccupied vehicle at 50th Street. That bag was found to contain a .380 caliber handgun, according to the complaint. Prosecutors said five .380 caliber casings were found at the shooting scene.

According to prosecutors, Jones said before the pursuit, he saw a dark SUV without police marks and "believed someone was out to get him," so he drove away. He further admitted he and a woman picked up the victim that day and drove to an alley near 29th and State. He said the woman he was with set the victim up to be robbed, noting that "he didn't wake up that morning knowing he was going to kill someone," claiming this was the fault of the woman who set him up.

The complaint noted Jones was convicted of possession of a firearm by a felon in February 2016.