Amy Coney Barrett gave an opening statement Oct. 12, 2020 at the confirmation hearings for the Supreme Court.

McConnell said earlier Tuesday that he will begin the process as soon as the Senate Judiciary Committee wraps up its work Thursday. With a 53-47 Republican majority, and just two GOP senators opposed, Barrett is on the way to confirmation that will seal a conservative hold on the court for years to come.

The Senate Judiciary Committee is set to meet Thursday to vote on recommending Barrett's nomination to the full Senate. By Friday, procedural votes are expected, continuing over the weekend as Republicans push through the steps for a final vote to confirm Barrett.

"We will be voting to confirm Justice-to-be Barrett next Monday and I think that will be another signature accomplishment in our effort to put on the courts, the federal courts, men and women who believe in a quaint notion that the job of a judge is to actually follow the law," McConnell said during a news conference following the weekly GOP Senate lunch, according to FOX News.

McConnell must move to shift the Senate into executive session, instead of legislative session, to consider the Barrett nomination, FOX News reported. This process likely requires a vote, but is not debatable, according to the outlet. 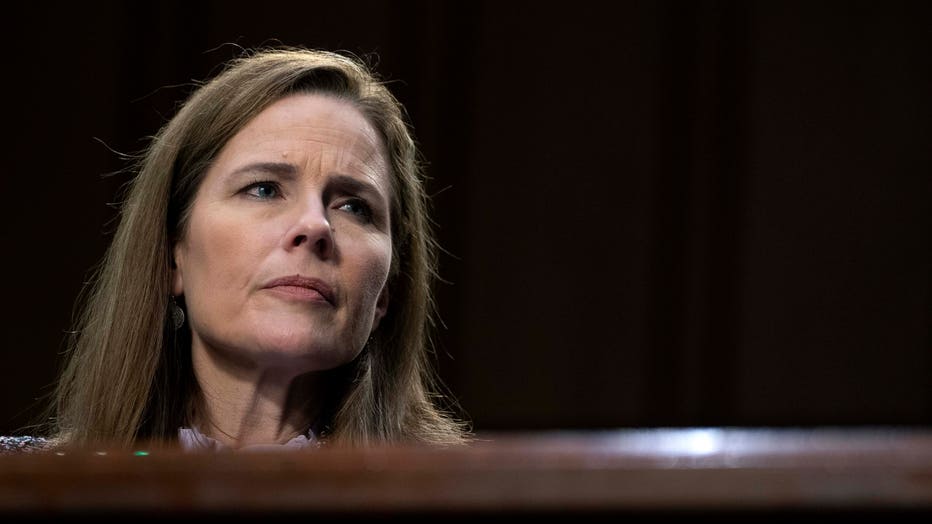 Supreme Court nominee Amy Coney Barrett testifies in front of the Senate Judiciary Committee on the third day of her confirmation hearings on Capitol Hill on Oct. 14, 2020 in Washington, D.C. (Photo by Stefani Reynolds-Pool/Getty Images)

Barrett, a 48-year-old appellate court judge from Indiana, delivered few specific answers during several days of public testimony as senators probed her previously outspoken views against abortion, the Affordable Care Act and other issues before the court.

She declined to say whether she would recuse herself from cases involving the election between President Donald Trump and Democrat presidential nominee Joe Biden.

Trump has said he wants the judge seated in time to hear any potential disputes from the Nov. 3 election. He also has said he's looking for a judge who would rule against the Obama-era health care law, which is headed to the court in a case that justices are expected to hear Nov. 10.

Sen. Amy Klobuchar pressed Judge Amy Coney Barrett on whether she was aware of President Donald Trump's opposition to the Affordable Care Act.

If confirmed, Barrett would be Trump's third justice on the court. She would fill the vacancy from the late Ruth Bader Ginsberg, the liberal icon, locking in a 6-3 conservative majority on the high court.

Without the votes to stop Barrett's confirmation to the high court, Democrats have few options left. They are searching for two more GOP senators to break ranks, but that seems unlikely. Never before has a court nominee been voted on so close to a presidential election.

Senate Democratic leader Chuck Schumer on Tuesday decried what he called the “farcical” process to “jam” through Trump's choice, even as the coronavirus outbreak sidelined GOP senators.

“The Republican majority is running the most hypocritical, most partisan and least legitimate process in the history of Supreme Court confirmations,” he said during a speech as the Senate opened.

RELATED: What happens if 2020 election is contested? Here are possible scenarios