WASHINGTON — The Senate confirmed Neil Gorsuch to become the newest associate justice on the Supreme Court Friday, elevating Donald Trump's nominee following a corrosive partisan confrontation that could have lasting impacts for the Senate and the court.

Vice President Mike Pence was presiding as the Senate voted 54-45 in favor of Gorsuch, a 49-year-old veteran of the 10th U.S. Circuit of Appeals in Denver whose rulings make him an intellectual heir to the late Justice Antonin Scalia, whose seat he will fill. 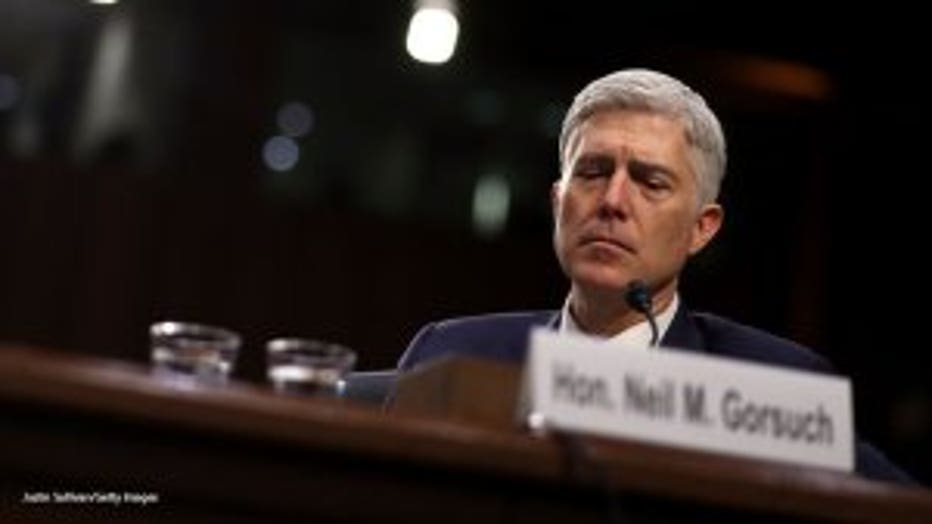 WASHINGTON, DC - MARCH 22: Judge Neil Gorsuch testifies during the third day of his Supreme Court confirmation hearing before the Senate Judiciary Committee in the Hart Senate Office Building on Capitol Hill, March 22, 2017 in Washington. Gorsuch was

Gorsuch won support from 51 of the chambers' Republicans as well as three moderate Democrats up for re-election in states Trump won last fall: Joe Manchin of West Virginia, Heidi Heitkamp of North Dakota and Joe Donnelly of Indiana. GOP Sen. Johnny Isakson of Georgia did not vote.

The outcome was a major win for Trump, his biggest congressional victory to date, as well as for Senate Majority Leader Mitch McConnell, R-Ky., who kept Scalia's seat open after the justice's death in February 2016. McConnell refused to hold hearings for President Barack Obama's nominee.

Gorsuch will be sworn in as the 113th justice on Monday in separate ceremonies at the court and the White House.

Justices take two oaths, one required by the Constitution and the other set by federal law.

Chief Justice John Roberts will administer the constitutional oath to Gorsuch in a private ceremony in the justices' conference room at 9 a.m.

Later Monday, Justice Anthony Kennedy will ask his former law clerk and new colleague to take the second oath in a public ceremony at the White House. The court did not give a time for the White House event.

Gorsuch will officially be a member of the court once he takes the two oaths.

Democrats denounced the GOP's use of what both sides dubbed the "nuclear option" to put Gorsuch on the court, calling it an epic power grab that would further corrode politics in Congress, the courts and the United States. Many Republicans bemoaned reaching that point, too, but they blamed Democrats for pushing them to it.

"Judge Gorsuch is a highly qualified, mainstream judge who will apply the law as written, rather than alter the law to achieve the outcome he desires. It was a pleasure fulfilling my campaign promise of voting to confirm a judge - not a superlegislator or judicial activist - as our next Supreme Court justice."

Gorsuch is expected to be sworn in within days, in time to hear the final cases of the term. He was nominated by Trump shortly after the January inauguration.

The Senate change, affecting how many votes a nominee needs to advance to a final confirmation vote, will apply to all future Supreme Court candidates as well. Trump himself predicted to reporters aboard Air Force One that "there could be as many as four" Supreme Court vacancies for him to fill during his administration.

"In fact, under a certain scenario, there could even be more than that," Trump said. There is no way to know how many there will be, if any, but several justices are quite elderly.

Even as they united in indignation, lawmakers of both parties, pulled by fierce political forces from left and right, were unwilling to stop the confirmation rules change. The maneuvering played out in a tense Senate chamber Thursday with most members in their seats, a rare and theatrical occurrence.

First Democrats mounted a filibuster, denying Gorsuch the 60 votes needed to advance to a final vote. Then McConnell raised a point of order, suggesting that Supreme Court nominees should not be subjected to a 60-vote threshold but instead a simple majority in the 100-member Senate.

McConnell was overruled, but he appealed the ruling. And on that he prevailed on a 52-48 party-line vote. The 60-vote filibuster requirement on Supreme Court nominees was effectively gone, and with it the last vestige of bipartisanship on presidential nominees in an increasingly polarized Senate.

The developments were accompanied by unusually bitter accusations and counter-accusations. And yet in many ways the showdown had been pre-ordained, the final chapter in years of partisan warfare over judicial nominees.

Even as senior Republicans lamented the voting change, McConnell and some allies argued that all they were doing was returning to a time, not long ago, when filibusters of judicial nominees were unusual, and it was virtually unheard-of to try to block a Supreme Court nominee in that fashion.