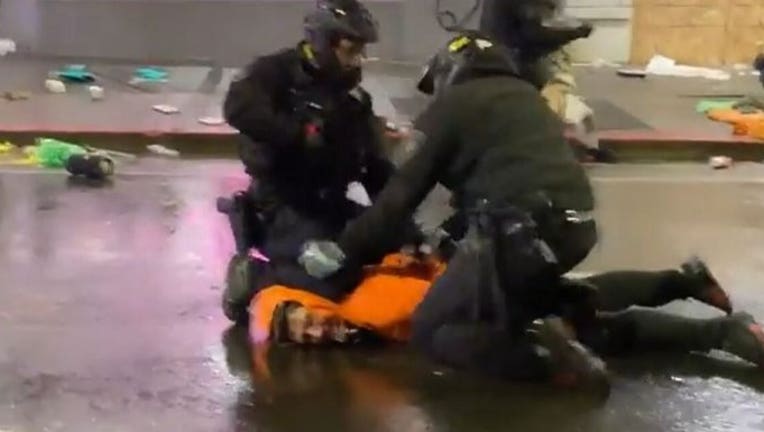 SEATTLE — A Seattle police officer was seen on video pulling a fellow cop’s knee off the neck of a man who was being detained among a group of looters Saturday night, May 30.

Crosscut journalist Matt McKnight captured the act as looters raided a T-Mobile store during demonstrations for George Floyd, a black man who died in Minneapolis May 25 as he pleaded for air after a white police officer used a similar method to pin him down.

The video shows looters streaming out of the store as police arrive on bicycles. Some looters are wrestled to the ground and detained as others continue running to escape police.

One looter, a white man wearing an orange rain jacket, attempts to run from the police, video shows, but two officers quickly tackle him to the ground. One officer uses an apparent knee-on-neck method of restraint while the other ties the man’s hands.

“Get your (expletive) knee off his neck,” one of the bystanders can be heard yelling.

Another shouts: “Get your knee off his neck!”

The officer keeps his knee on the man’s neck for about 13 seconds before the other officer grabs his leg and pulls it off the man’s neck and onto his back, video shows.

Peaceful daytime protests in Seattle turned into riots as night fell on Saturday, leaving behind a path of destruction that saw hundreds of businesses and buildings looted and damaged.

The demonstrations, which have in many cities across the country turned violent as outside groups cause destruction, were sparked by anger over Floyd’s death in Minneapolis last week, which was captured on cellphone video.

The four police officers who were arresting Floyd for suspicion of passing a counterfeit bill were fired Tuesday. Third-degree murder and second-degree manslaughter charges were filed Friday against Derek Chauvin, the officer who used his knee to pin Floyd down, as Floyd pleaded for air.