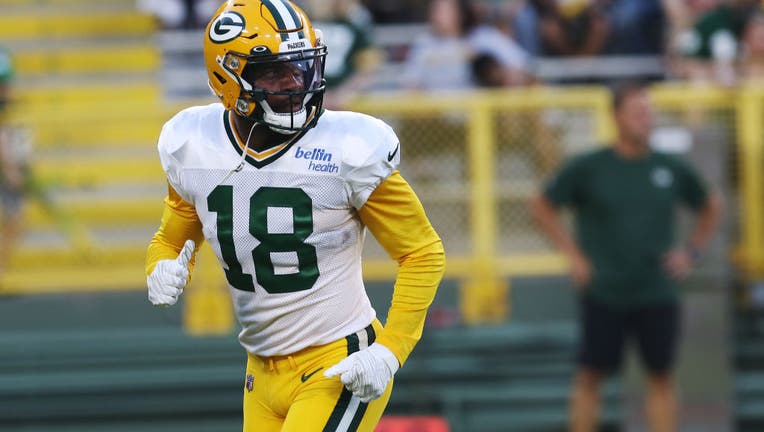 During one-on-one matchups between receivers and defensive backs early in practice, Savage pulled up while trying to cover Amari Rodgers. Savage, a first-round draft pick in 2019, watched the rest of practice from the sideline with ice wrapped around his right leg.

"I don’t think it’s a concern," Savage said. "It’s a fast-people injury. Some of those things you can’t avoid. I’ll just handle it the right way and listen to those guys back there and I’ll be all right."

Early in training camp, Green Bay’s defense has mostly had its way with an offense that's led by four-time MVP quarterback Aaron Rodgers but is adjusting to playing without All-Pro receiver Davante Adams. With Vernon Scott replacing Savage in the lineup, the defense’s strong play continued.

During a red-zone period, the starting offense ran seven plays inside the 10-yard line but scored only once. Rodgers zipped a touchdown pass to tight end Marcedes Lewis against tight coverage from rookie linebacker Quay Walker on the second play.

After that, safety Adrian Amos broke up a pass to Randall Cobb, linebacker De’Vondre Campbell stopped Aaron Jones on a jet-sweep-style flip from Rodgers, safety Shawn Davis almost intercepted a pass intended for Allen Lazard, and defensive tackle Dean Lowry dropped Jones on a run from the 2.

"I think there’s some things we’re doing a great job with and there’s a lot of areas for improvement," coach Matt LaFleur said. "One thing that we’ve kind of challenged our defense on is the consistency with stopping the run, and then I think they’ve done a pretty nice job defending the pass and, in particular, the deep balls and not giving up a ton of big plays down the field."

At the start of camp, Rodgers predicted the offense was "going to get our butts kicked most days" by a defense that might be the team’s best since winning the Super Bowl in 2010. The Packers re-signed Campbell and cornerback Rasul Douglas, added defensive tackle Jarran Reed in free agency and added Walker and defensive tackle Devonte Wyatt in first round of the draft.

Meanwhile, Green Bay’s offense has struggled without Adams, who was traded to the Raiders in February, and offensive linemen David Bakhtiari and Elgton Jenkins, who are recovering from torn ACLs.

"It’s a double-edged sword," LaFleur said. "I hope it’s our defense is really stout and they’re going to be very tough to deal with. I think the one area that we have to improve is just the consistency up front. Now, granted, I think we have a pretty good defensive front. Our front seven can be pretty salty, so I hope they’re making our offense that much better. But, at the end of the day, it really doesn’t matter who’s out there. They’ve got to get the job done and we’ve got to see improvement over the course of the next week and into the preseason games."

The Packers will open the preseason at San Francisco on Friday night.

NOTES: Attendance was announced at 50,112. ... LaFleur canceled the last period because his team was banged up after a fifth consecutive day of practice. ... One offensive highlight was backup quarterback Jordan Love’s long touchdown pass to Samori Toure. Love threw the ball with Wyatt in his face. ... The No. 1 offense ended the night with a touchdown, a 2-yard run by AJ Dillon set up by completions of 26 and 11 yards to Sammy Watkins. ... Yosh Nijman got all the starters reps at left tackle while Royce Newman and rookie Zach Tom alternated at right tackle.