WASHINGTON — Sandra Day O'Connor, the first woman on the Supreme Court, announced Tuesday in a frank and personal letter that she has been diagnosed with "the beginning stages of dementia, probably Alzheimer's disease."

The 88-year-old said doctors diagnosed her some time ago and that as her condition has progressed she is "no longer able to participate in public life." After her 2006 retirement from the high court O'Connor had appeared around the country championing an educational organization she founded and serving as a visiting appeals court judge, among other activities. But she stopped speaking publicly more than two years ago.

"While the final chapter of my life with dementia may be trying, nothing has diminished my gratitude and deep appreciation for the countless blessings in my life," she wrote. She added: "As a young cowgirl from the Arizona desert, I never could have imagined that one day I would become the first woman justice on the U.S. Supreme Court."

O'Connor's announcement of her diagnosis came a day after an Associated Press story in which her son Jay O'Connor said that his mother had begun to have challenges with her short term memory. The story noted that O'Connor had stopped making public appearances and recently turned over an office she had kept at the Supreme Court to newly retired Justice Anthony Kennedy. Jay O'Connor also said that hip issues have meant his mother now primarily uses a wheelchair and stays close to her home in Phoenix.

O'Connor wrote that since "many people have asked about my current status and activities" she wanted to be "open about these changes."

O'Connor was a state court judge before being nominated to the Supreme Court in 1981 by President Ronald Reagan, who fulfilled a campaign promise by nominating a woman to the high court. O'Connor's letter Tuesday was reminiscent of Reagan's 1994 letter announcing that he had Alzheimer's disease. He died in 2004.

During her more than two decades on the court O'Connor was often the deciding vote in important cases, providing the crucial fifth vote when the court divided 5-4. On the Supreme Court, her votes were key in cases about abortion, affirmative action and campaign finance as well as the Bush v. Gore decision effectively settling the 2000 election in George W. Bush's favor.

O'Connor grew up on a ranch on the border of Arizona and New Mexico called the "Lazy B" and went to Stanford for college and law school. Although she graduated third in her class from law school she had difficulty finding a job as a lawyer at a time when there were few women in the legal profession. Despite those early challenges, she became the first woman to lead the Arizona state senate before becoming a judge. 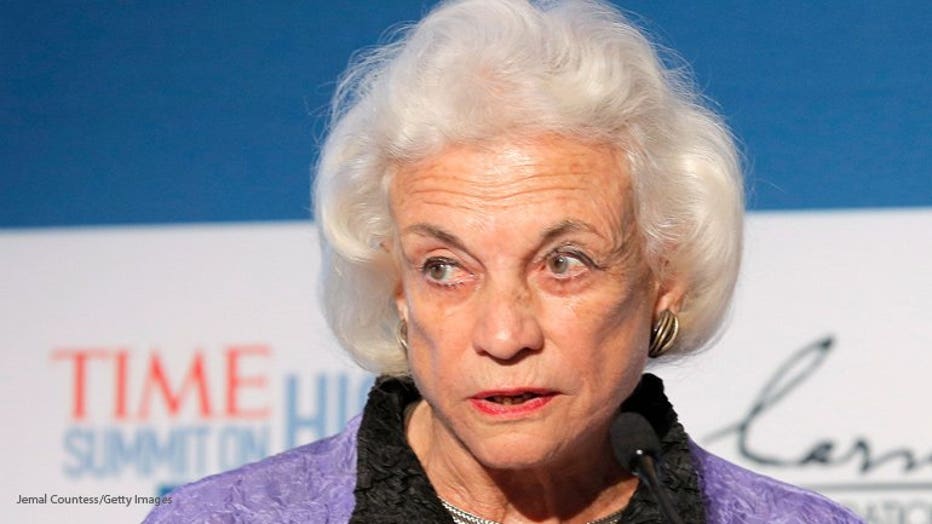 O'Connor was 51 when she was confirmed 99-0 to the Supreme Court. She was 75 when she announced her retirement from the court in 2005. Her decision to step down was influenced by a decline in the health of her husband, John O'Connor III, who himself had been diagnosed with Alzheimer's disease.

In 2007, O'Connor's family made public that John O'Connor had struck up a romance with a fellow Alzheimer's patient at the assisted living center where he had moved. Scott O'Connor, one of the justice's three sons, told a Phoenix television station that his mother was "thrilled" her husband was "relaxed and happy."

O'Connor's departure from the court and her replacement by Justice Samuel Alito moved the court to the right, and O'Connor wasn't always happy with the court's direction after she left.

Asked at a 2009 event how she felt about the court retreating from or undoing rulings she was instrumental in shaping, she responded: "What would you feel? I'd be a little bit disappointed. If you think you've been helpful, and then it's dismantled, you think, 'Oh, dear.' But life goes on. It's not always positive."

In retirement O'Connor was an enthusiastic advocate for iCivics, an organization she founded that promotes civic education in schools through free, educational online games. O'Connor wrote Tuesday that she felt strongly about working to advance civic learning and engagement "because I've seen first-hand how vital it is for all citizens to understand our Constitution and unique system of government, and participate actively in their communities."

"There is no more important work than deepening young people's engagement in our nation," she wrote.

Chief Justice John Roberts said in a statement that he was "saddened to learn" that O'Connor "faces the challenge of dementia."

"Although she has announced that she is withdrawing from public life, no illness or condition can take away the inspiration she provides for those who will follow the many paths she has blazed," Roberts wrote.