Journalist Mark Savchuk joins LiveNOW from FOX from Kyiv, Ukraine to update how the war has been going. Savchuk says despite recent attacks, morale among the Ukrainian people is high as they stand united together with the common goal of fighting for freedom.

Ukraine also accused Moscow of forcibly taking hundreds of thousands of civilians to Russia so they could be used as "hostages" to pressure a surrender. But Russia says it's evacuating civilians of their own free will.

Here are some key things to know about the Russia-Ukraine conflict:

Are Ukranians being forced to Russia?

Kyiv and Moscow gave conflicting accounts about whether people were being moved to Russia willingly or whether they were being coerced or manipulated.

Ukraine officials say Russian troops are confiscating passports from Ukrainian citizens then moving them to "filtration camps" in Ukraine’s separatist-controlled east before sending them to various distant, economically depressed areas in Russia. Lyudmyla Denisova, Ukraine’s ombudsperson, said 402,000 people, including 84,000 children, were moved against their will.

Ukraine’s Foreign Ministry said 6,000 of those forced to Russia were from the devastated port city of Mariupol, and 15,000 more people in a section of Mariupol under Russian control have had their identifying documents confiscated.

The ministry said the Russians intend to "use them as hostages and put more political pressure on Ukraine."

But Russian Col. Gen. Mikhail Mizintsev said the roughly 400,000 people evacuated to Russia since the start of the military action were from the Donetsk and Luhansk regions in eastern Ukraine, where pro-Moscow separatists have been fighting for control for nearly eight years.

Donetsk Region Gov. Pavlo Kyrylenk said residents in Mariupol have long been deprived of information and may be influenced by Russian lies. 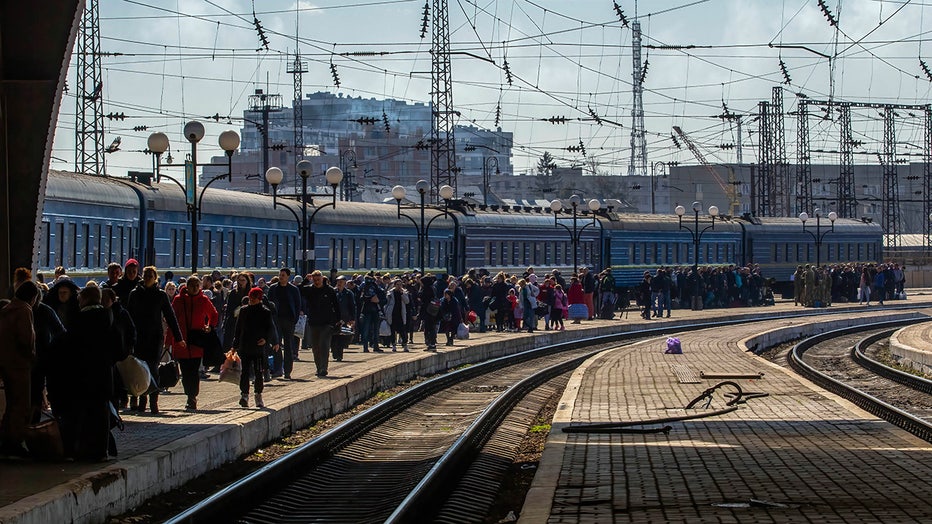 People depart a train from Mariupol fleeing Russian violence. A train carrying refugees from war torn Mariupol arrived at the Lviv train station. Many will continue their journey from Lviv out of Ukraine. (Photo by Ty O'Neil/SOPA Images/LightRocket v

RELATED: US to welcome up to 100,000 Ukrainian refugees fleeing Russian war

What happened at the NATO summit?

Zelensky addressed NATO leaders by video, insisting that Western leaders give Ukraine unlimited help against Russia, which is "without limits using its entire arsenal."

He said a tiny percentage of the warplanes and tanks controlled by NATO members could make a difference.

Western leaders didn't meet all his requests, but pledged new sanctions against Russia and humanitarian aid. Biden said in a statement after the meeting: "We are committed to identifying additional equipment, including air defense systems, to help Ukraine."

Finland announced it would send more military equipment to Ukraine, and Belgium announced it will add 1 billion euros to its defense budget in response to Russia’s invasion.

Separately, the White House announced the U.S. would welcome 100,000 Ukrainian refugees and provide an additional $1 billion in food, medicine, water and other supplies.

Biden said at a news conference that NATO has "never been more united than it is today."

As Russia's war with Ukraine continues, NATO has convened a summit to discuss what more can be done to assist Ukraine in the conflict. President Joe Biden, who is among those attending the summit in Brussels, made remarks and took questions following a meeting with other world leaders. Biden also announced $1 billion in humanitarian aid for Ukraine citizens trying to flee the war zone.

What is happening on the battlefield?

Ukraine’s navy said Thursday that it sank a large landing ship near the port city of Berdyansk that had been used to supply Russian forces with armored vehicles.

Photos and video after the naval attack showed fire and thick plumes of smoke. Russian TV reported earlier this week that the ship, Orsk, was the first Russian warship to enter Berdyansk. The port was going to be used to deliver military equipment for the Russians, the report said.

Ukraine also claimed two more ships were damaged and a 3,000-ton fuel tank was destroyed when the Orsk was sunk, causing a fire that spread to nearby ammunition supplies.

Russia claimed to have taken the eastern town of Izyum after fierce fighting.

A local government official in the northern city of Chernihiv said a "catastrophe" is unfolding as Russian troops deliberately target sites where food is being stored. An airstrike there earlier this week destroyed a crucial bridge.

City council secretary Olexander Lomako estimated that more than 130,000 people remain in the city with a pre-war population of 285,000, but that Ukraine remains in full control, saying the "Ukrainian flag waves here." He said the city's ancestors never thought of surrendering to enemies.

"Our generation follows their example. We defend ourselves, whatever it costs us. And we will keep standing. I want the whole world to know," he said. 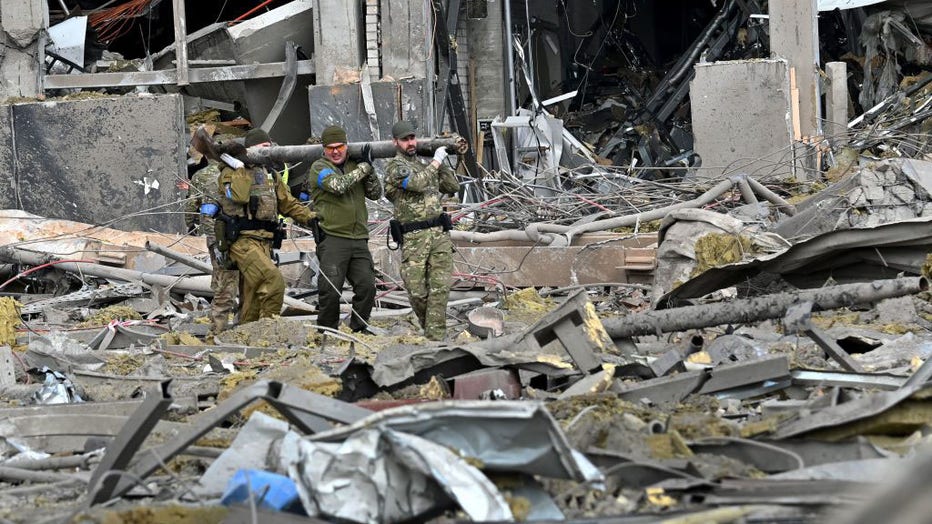 Ukrainian servicemen carry a fragment of a rocket outside a building in Kyiv after it was destroyed by Russian shelling. (SERGEI SUPINSKY/AFP via Getty Images)

How is the West cracking down on Russia?

Western nations continued to crank up the cost of war for Russian President Vladimir Putin.

Even as the Russian stock market opened to limited trading Thursday, the Group of Seven leaders announced they are restricting the Russian Central Bank’s use of gold.

The U.S., meanwhile, announced a new round of sanctions targeting 48 state-owned defense companies, 328 members of the Duma, Russia’s lower parliament, and dozens of Russian elites. The White House said the efforts were designed to blunt Russia’s ability to use its international reserves to fund the war.

Britain on Thursday sanctioned 65 more companies and individuals over Russia’s invasion of Ukraine. The targets include Russia’s largest private bank and a woman the British government said was the stepdaughter of Foreign Minister Sergey Lavrov.

What has the AP directly witnessed or confirmed?

Shelling was heard in the northern part of Kharkiv on Thursday afternoon, and AP journalists saw an ambulance collecting four bodies near the remnants of rockets. Smoke billowed from residential neighborhoods. At least one house was destroyed.

In the western city of Lviv, church bells rang out shortly before sunset in a coordinated call for a no-fly zone over Ukraine. At the top of a cathedral, white-smocked volunteers pulled on ropes to set a huge bell swinging. Afterward, one man pointed to a coffin resting against a wall of the bell tower amid the growing darkness. "For Putin," he said with a smile.

What about war crimes?

Dozens of nations met Thursday in The Hague to pledge support for the International Criminal Court’s investigation into whether Russia committed war crimes in Ukraine.

Britain said it was boosting its support for the ICC’s Ukraine probe with extra funds and specialist staff. France announced it will provide magistrates, investigators and experts and 500,000 euros ($550,000) in extra funding.

British Deputy Prime Minister Dominic Raab said the meeting was important to show support for a prosecution office that has often been stretched financially. Raab said the meeting also sends a message that these 38 countries "will not stand for impunity in Ukraine." He said Russian leaders and commanders, whether in Moscow or on the ground in Ukraine, will be held accountable if they commit war crimes.

The meeting came a day after U.S. Secretary of State Antony Blinken said the Biden administration made a formal determination that Russian troops have committed war crimes. The U.S. is not a member state of the ICC, but could still help gather evidence against Russian forces.