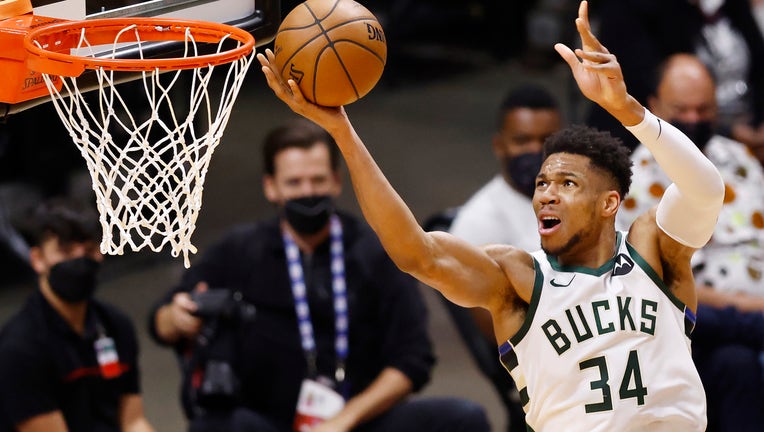 MIAMI, FLORIDA - MAY 27: Giannis Antetokounmpo #34 of the Milwaukee Bucks goes up for a layup against the Miami Heat during the first quarter in Game Three of the Eastern Conference first-round playoff series at American Airlines Arena on May 27, 202

MILWAUKEE - Milwaukee’s roster transformation started after losing to Miami in last season’s playoffs, one that made the Bucks give themselves a critical look.

So they got bigger. Tougher. More experienced.

And in the playoff rematch with the Heat, they were simply better.

Some of those new additions — Jrue Holiday, Bryn Forbes and Bobby Portis in particular — played huge roles for the Bucks in their first-round sweep of the Heat, one that ended Saturday and ensured that Milwaukee gets at least a full week off to prepare for an Eastern Conference semifinals matchup against either Brooklyn or Boston.

"There were a lot of adjustments to be made," Bucks center Brook Lopez said. "And all of that was for this time.

A trio of returning players — Giannis Antetokounmpo, Khris Middleton and Lopez — were Milwaukee’s leading scorers against Miami, averaging a combined 61 points per game. Holiday, Forbes and Portis combined to average 41 more, and Forbes was particularly good from 3-point range off the bench.

The Bucks were good. Antetokounmpo says they have to be better, and he has a plan for the next week.

The East semifinals series against either second-seeded Brooklyn or seventh-seeded Boston will start on June 5 if the Nets advance in five games; in any other scenario, the Bucks will next play on June 7.

It’s the third consecutive season in which the Bucks have made the East semifinals; they lost in five games to Miami last season and beat Boston in five games in 2019 before wasting what was a 2-0 lead and falling to eventual NBA champion Toronto in the East finals.

The 2019 and 2020 Bucks carried the burden of being seeded No. 1, and both times Antetokounmpo had the target that comes when a team faces the NBA’s MVP. Neither is in play this season; the Bucks are seeded third and Antetokounmpo wasn’t a top-three MVP vote-getter, meaning he’ll soon cede the crown to Denver’s Nikola Jokic, Philadelphia’s Joel Embiid or Golden State’s Stephen Curry.

Unless the Celtics pull off a comeback against the Nets — Brooklyn leads that series 2-1, with Game 4 in Boston on Sunday — the Bucks won’t be home again until Game 3 of the East semis.

When they get back to Milwaukee, it’ll seem close to normal for the first time in 15 months.

The Bucks are raising attendance for the remainder of the playoffs; it was 9,100 for the two home games against Miami and will increase to 16,500 after approval by the league and Milwaukee’s health department. The season started with no fans allowed, then went to about 250 for some games in Milwaukee, eventually to about 3,200 — and now most seats can be filled again.

"Certainly, this group’s been looking forward to the playoffs," Bucks coach Mike Budenholzer said. "All the teams that are competing this time of year, they understand what it takes to win. And you’ve got to take it to another level, both mentally and physically. I think the group’s been preparing for it. I think their focus is good. All that just is part of what makes us hopefully be prepared and have an edge and have a focus that you need this time of year."