Employees save woman trapped on the Chattahoochee River

The quick actions from those working at a nearby restaurant helped to save the woman’s life.

COBB COUNTY, Ga. - A fun raft trip on the Chattahoochee River turned into a terrifying day for one woman trapped in the river for hours and struggling to stay afloat.

Thankfully the quick actions from those working at a nearby restaurant helped to save the woman’s life.

"I don’t’ think hardly anyone would jump in. I think a lot of people would assume she was OK," Alexandra Jones said.

A video shows the moments Tim Eskew jumped into action to swim and save a woman floating uncontrollably down the Chattahoochee River Saturday evening.

"When I spoke to her I didn’t get a reply and it just seemed a little off. I asked her a few more questions and still didn’t get any response or reply and that’s when I knew something was wrong," Eskew said. 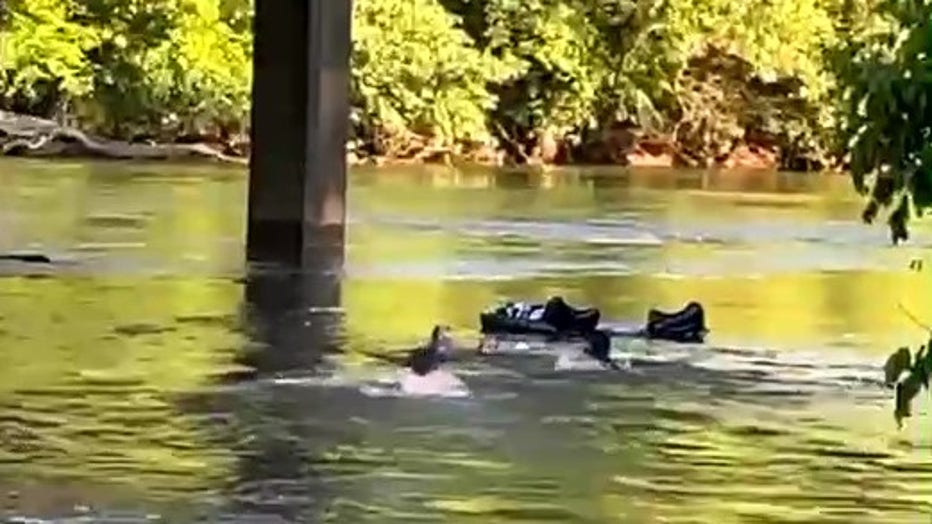 Tim Jones and Alexandria Jones work at the Canoe Restaurant on the river in Cobb County when a customer spotted the woman in the water.

"She was rafting with her boyfriend and they got stuck in trees. Her raft broke free and popped. She was floating by herself down the river with very little to hang onto and she said she had been in there for two hours," Eskew said.

Off-duty Marietta Police Officer Ryan Smith was a patron of Canoe and also jumped in to help pull the rafter to safety.

Witnesses said the woman was shivering and cold when she came out of the river.

"I have never seen anyone go into the river especially from here and I’ve never seen someone rescued from the river," Jones said.

Eskew said he has swum his entire life and although he was never a lifeguard he had taken water safety courses just in case.

"If you’re not a strong swimmer wear a life vest. I don’t think she was wearing one when I found her. If the raft had gone then I think she would have too," he said.

Many say water safety is a priority as the temperatures start to warm up and more people head to the water for fun.

"Definitely stay with your party if possible. Be prepared to spend time with water. Even though you are going to float on the river be prepared in case you are in the water for hours at a time," Eskew said.