ARKLOW, Ireland -- Now, this is nuts. A photographer has captured a remarkable image of a red squirrel just before it attacks a grey squirrel for getting too close, British news agency South West News Service reports.

John O'Brien took the photo of the two small mammals, the red squirrel with its claws stretched out and the grey squirrel seemingly unaware it's about to be attacked.

"This photo is so unique; it’s very unusual for the red squirrel to win," O'Brien, 57, said. "The photo tells a great story, because the grey squirrels are usually bigger and stronger. 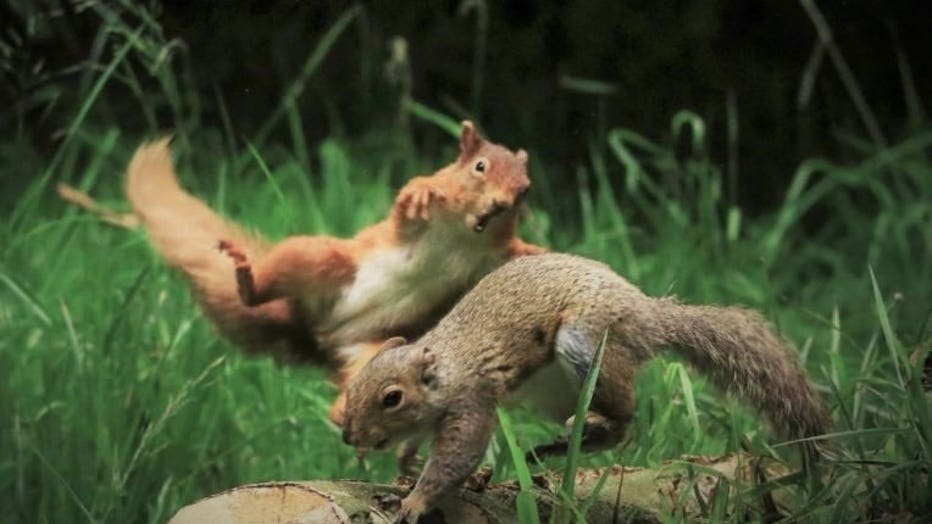 “The red squirrel was re-claiming its territory," the wildlife photographer from Arklow, Ireland, continued. "It is great to see as the greys have almost taken over most of the country. They move at phenomenal speeds so I don’t know how I took the photo."

The encounter between the two squirrels lasted just 30 seconds before the grey squirrel was frightened off, but O'Brien said the photo was an experience he'll never forget.

"I have to find where the animals are living, and then I hide and spend hours and hours – weeks – watching and observing them," he explained, noting the image was taken in an Arklow forest on July 17. “If I am lucky, they appear and I can get beautiful photographs of them. I go most days to observe the many different creatures, and I’ve learned that the red squirrel is an extraordinary creature; they’re so brave."

Red squirrels, which are found all over Europe and Asia, are officially classified as "near threatened" in certain parts of the U.K., with population estimates ranging between 120,000 and 160,000 in the country, according to the Woodland Trust.