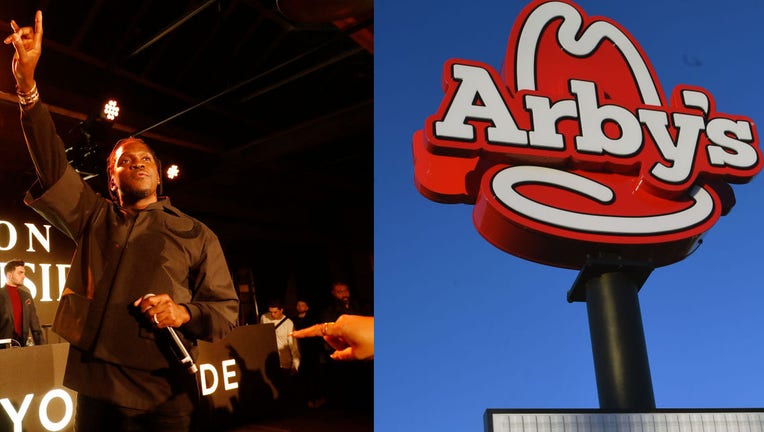 WASHINGTON - Arby’s apparently wants all the smoke with McDonald’s after the restaurant chain partnered with Grammy-nominated rapper Pusha T to release a diss track aimed at Mickey D’s.

The 75-second track is featured in a new Arby’s commercial to promote the company’s new spicy fish sandwich. The ad was posted on Twitter Monday and has received over 4.3 million views and counting.

Pusha T, who grew up in Virginia Beach, touted the song on his official Twitter page writing "Just dropped a diss track with @Arbys. Grab some popcorn and a Spicy Fish Sandwich. #ArbysSpicyFishDissTrack #ArbysPaidMeButIWouldSayThisAnyway"

The rapper opens the track with the lyrics, "I’m the reason the whole world love it now I gotta crush it filet-o-fish is *** and you should be disgusted, how dare you sell a square fish asking us to trust it. A half slice of cheese Mickey D’s on a budget?"

He continues, "Arby's crispy fish is simply it with lines 'round the corner we might need a guest list. Exit stage left the sandwiches taste fresh, a little cube of fish from a clown is basic. Say less this argument is baseless, drowned in tartar that filet-o-fish is tasteless. See Arby's only deals in the greatness, I bet the house on it like it's Vegas."

Arby’s posted on their official Twitter page: "If you think the new Arby’s x @PUSHA_T diss track is too hot, maybe you’re not quite ready for our new Spicy Fish Sandwich either. #ArbysSpicyFishDissTrack."

Pusha T’s diss track of McDonald’s is reportedly connected to a beef from the early 2000s. The rapper claimed in a recent interview that he and his brother Malice, a fellow rapper, wrote the now-famous "I’m loving it" jingle for McDonald’s in 2003. The brothers alleged they were paid about $1 million total, the Washington Post reported.

Twitter users wasted no time chiming in about the new diss track with some posting the following:

@sm3rkyy "NO WAY!!! DID I JUST LISTENED TO A #Arbys and @PUSHA_T diss track lol wasn't expecting this today honestly #ArbysSpicyFishDissTrack"

Pusha T’s collaboration with Arby’s is not the first time food and beverage companies have worked with rappers through the years.

Last year, Atlanta-based fast-food franchise Krystal named Atlanta rapper 2 Chainz the company's new head of creative marketing back in January. The Grammy-winning artist will be responsible for leading the creation of new platforms, partnerships, menus and merchandise in Atlanta.

In 2019, rapper Chance the Rapper partnered with food delivery company Postmates. The Grammy-nominated rapper and frequent patron of Postmates started an initiative to give back to his Chicago community. For every order from one of the rapper’s favorite local restaurants, they donated $1 to Chicago youth, according to FOX Business.

FOX5 Atlanta and FOX Business contributed to this story. This story was reported from Washington, D.C.