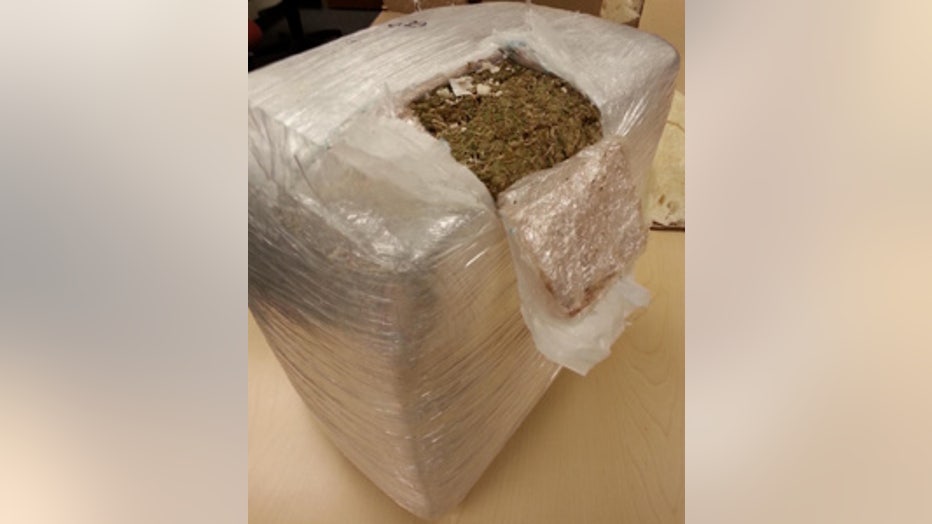 Authorities say deputies with the Racine County Sheriff's Office initiated a traffic stop on a vehicle that was northbound on I-94 around 4:39 p.m for speeding.

During the stop, a Sheriff's K-9 unit "Nitro" alerted on the vehicle and a subsequent search of the vehicle revealed 19 pounds of marijuana.

"He alerted on one of the doors, and he actually tried to jump through the window," Schmaling said.

The street value of the marijuana is approximately $19,000.

Sheriff's Investigators learned the marijuana was being transported from Illinois to Milwaukee.

Authorities say painstaking steps were taken to hide the marijuana.

"At least seven to eight layers of plastic -- including it looks like a fabric softener to mask the odor. It was placed inside a box, and then this is a spray foam that sprays in as a liquid, and then once it dries, it sort of expands," Schmaling said.

Sheriff's officials say the marijuana was hidden in the back cargo area of the vehicle.

A Milwaukee man was taken into custody for possession with intent to deliver marijuana. His identity is being withheld pending further investigation.

This is the second time in less than a week that Racine County Sheriff's officials have made a drug bust during a traffic stop.

"There is a drug problem in the state of Wisconsin and more specifically, more locally here in Racine County. This does not surprise me. This is just a sign of our times that we're experiencing right now," Schmaling said.