The trial of R. Kelly entered its second day on Thursday, with a key accuser giving emotional testimony.

NEW YORK - A key accuser at the R. Kelly sex-trafficking trial returned to the witness stand on Thursday, saying he often videotaped their sexual encounters and demanded she dress like a Girl Scout during a relationship that began when she was a minor.

Jerhonda Pace resumed her testimony in Brooklyn federal court a day after telling jurors she was a 16-year-old virgin and a member of Kelly’s fan club when he invited her to his mansion in 2010. While there, she said, she was told to follow "Rob’s rules" — edicts restricting how she could dress, who she could speak with and when she could use the bathroom.

Pace testified she believed Kelly gave her herpes, backing allegations by prosecutors that he broke the law by knowingly transmitting the STD. They offered more evidence on that point by calling his personal physician to the witness stand later Thursday to testify the singer had a long history of treatment for herpes.

Pace, who is pregnant and only a few days from her due date, asked for a break so she could compose herself.

On cross-examination, defense attorney Deveraux Cannick sought to show that Pace mixed up dates about when she interacted with Kelly and that she deceived him by at first lying about herself. 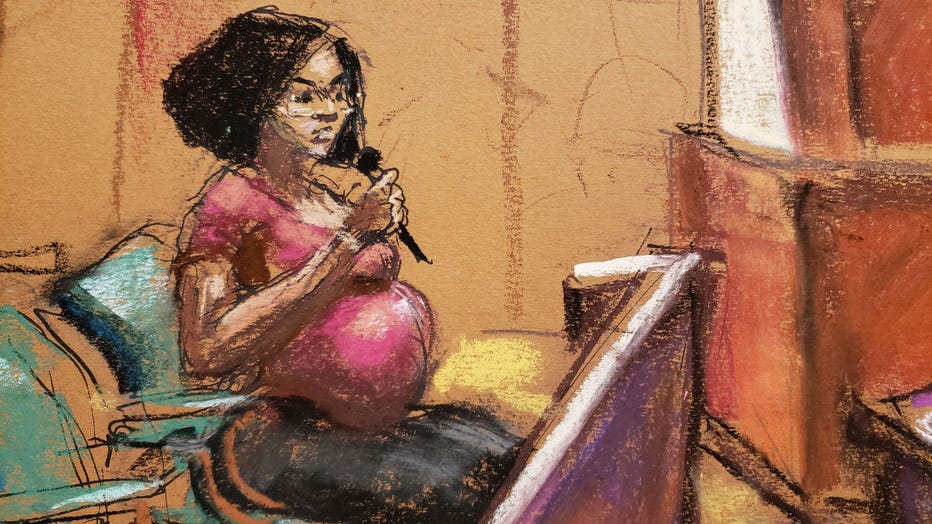 "You were in fact stalking him, right?" Cannick asked.

"That is not right," she responded.

Pace had testified earlier the she told Kelly she was 19 when they met but had informed him she was only 16 by the time he sexually abused her.

Cannick confronted her with a lawsuit settlement she signed indicating she agreed she never revealed to Kelly that she was a minor. She said it was in exchange for hush money.

The questioning fit a theme that defense lawyers have repeatedly pushed early in the trial: Kelly was victimized by groupies who hounded him at shows and afterward, only to turn against him years later when public sentiment shifted against him, they allege.

To bolster their claims against Kelly, prosecutors showed jurors screenshots from Pace’s phone showing several communications with Kelly in January 2010, including a text from him reading, "Please call." There was also a photo of her with "Rob" tattooed to her chest. She said she’s since "covered it up with a black heart." 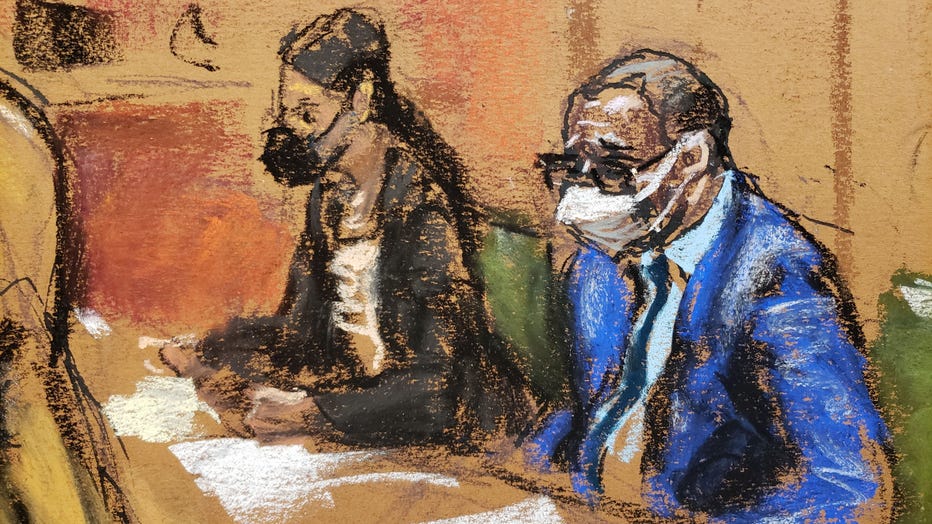 Later, Dr. Kris McGrath told jurors that he had been prescribing herpes medication for Kelly since at least 2007 and became fast friends with him until 2019, sometimes examining the singer during house calls at his mansion. Kelly didn't pay for treatment, but instead picked up the tab for the doctor to attend his concerts in Chicago, New York and elsewhere, he testified.

Pace, the trial's first witness, was among multiple female accusers — mostly referred to in court as "Jane Does" — expected to testify at a trial scheduled to last several weeks. Other likely witnesses include cooperating former associates who have never spoken publicly before about their experiences with Kelly.

The Associated Press doesn’t name alleged victims of sexual abuse without their consent unless they have shared their identities publicly. Pace has appeared in a documentary and participated in media interviews.

Kelly, 54, has denied accusations that he preyed on Pace and other victims during a 30-year career highlighted by his smash hit "I Believe I Can Fly," a 1996 song that became an inspirational anthem played at school graduations, weddings, advertisements and elsewhere.

The testimony comes more than a decade after Kelly was acquitted in a 2008 child pornography case in Chicago. The reprieve allowed his music career to continue until the #MeToo era caught up with him, emboldening alleged victims to come forward.

The women’s stories got wide exposure with the Lifetime documentary "Surviving R. Kelly." The series explored how an entourage of supporters protected Kelly and silenced his victims for decades, foreshadowing the federal racketeering conspiracy case that landed Kelly in jail in 2019.

On her way into federal court in Downtown Brooklyn for the second day of the trial, defense attorney Nicole Blank Becker spoke to reporters.

"Looking forward to the truth being told," said Blank Becker.

The openings and testimony came more than a decade after Kelly was acquitted in a 2008 child pornography case in Chicago. The reprieve allowed his music career to continue until the #MeToo era caught up with him, emboldening alleged victims to come forward.

The women’s stories got wide exposure with the Lifetime documentary "Surviving R. Kelly." The series explored how an entourage of supporters protected Kelly and silenced his victims for decades, foreshadowing the federal racketeering conspiracy case that landed Kelly in jail in 2019.

The trial is occurring before an anonymous jury of seven men and five women. Following several delays due mostly to the pandemic, the trial unfolds under coronavirus precautions restricting the press and the public to overflow courtrooms with video feeds.

The New York case is only part of the legal peril facing the singer. He also has pleaded not guilty to sex-related charges in Illinois and Minnesota.