The US Pentagon officially released three videos on April 27 of what they deemed unidentified aerial phenomena, footage of which had previously been widely shared across the internet.

The Pentagon has confirmed the authenticity of newly leaked video and images showing multiple UFO sightings by U.S. Navy personnel, as the government prepares to release a highly anticipated first-of-its-kind report on UFOs this summer.

An 18-second video shows what is described as three pyramid-shaped UFOs hovering over the warship USS Russell at night in July of 2019 off the San Diego coast. At one point, the pyramid-shaped crafts reportedly hovered 700 feet over the tail of the Russell.

This is the first video the public has seen from the July 2019 incident in which mysterious UFOs described as unmanned aerial vehicles reportedly harassed at least three U.S. warships during military exercises over multiple days — at one point matching the speed and bearing of one destroyer for 90 minutes while performing "brazen" maneuvers.

Months earlier, an FA-18 pilot reportedly used his cellphone to snap photos of three different unidentified aircrafts off the coast of Oceana in March including two UFOs dubbed the "Metalic Blimp" and "The Sphere." 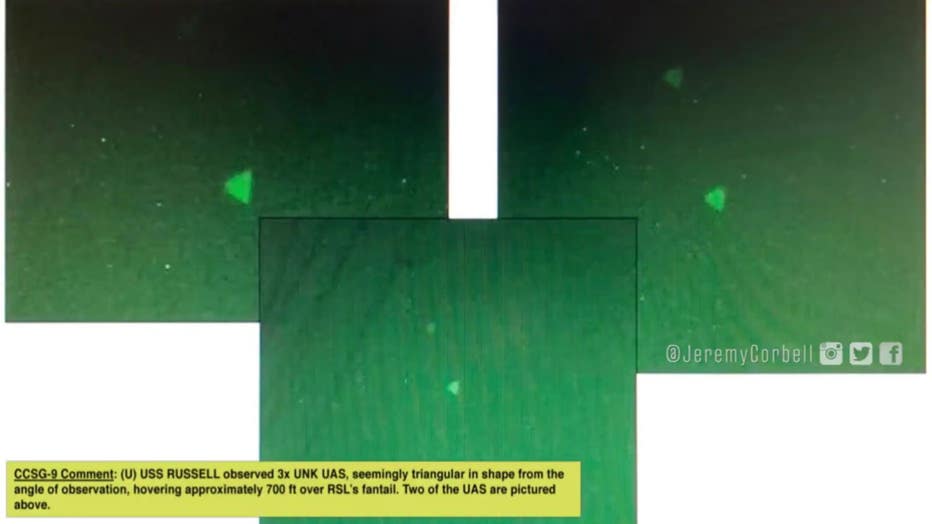 U.S. Navy filmed "pyramid shaped" UFOs hovering over the USS Russell in July 2019 off the coast of California. (Courtesy: @JeremyCorbell)

The unidentified aircrafts captured by the pilot in March 2019 were able to remain stationary in high winds, with no movement, beyond the capability of known balloons or drones, according to the Mysterywire.com.

"I can confirm that the referenced photos and videos were taken by Navy personnel," Department of Defense spokesperson Susan Gough told Fox News. "The UAPTF [Unidentified Aerial Phenomena Task Force] has included these incidents in their ongoing examinations."

Corbell and Knapp independently confirmed the leaked documents are unclassified images that were part of a series of classified briefings intended to educate members of the U.S. Intelligence Community about UFOs traveling in restricted airspace. 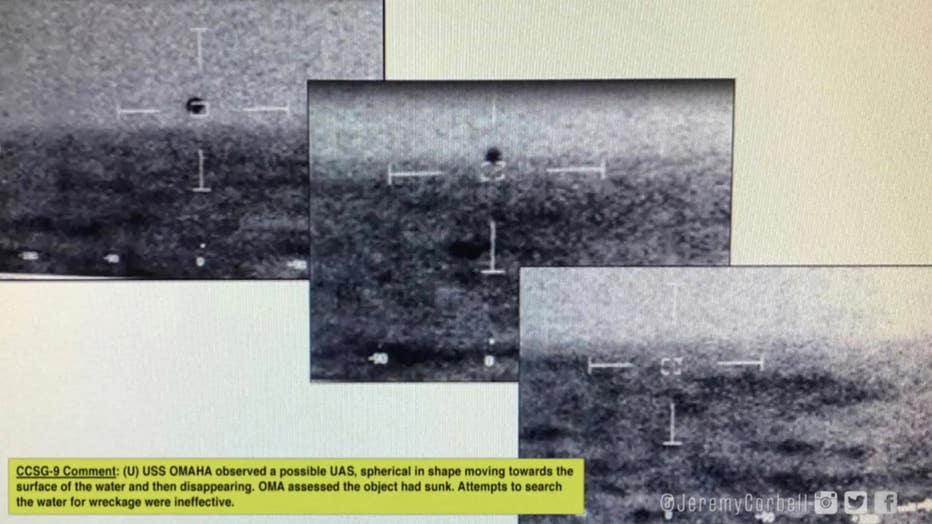 Jeremy Corbell says this series of photos was taken from the USS Omaha showing a "spherical"-shaped vehicle observed descending into the ocean without destruction. (Courtesy: @JeremyCorbell)

"This is explosive information," Corbell told Fox News. "This is probably the best UFO military filmed footage certainly that I’ve ever seen, but I think also that the world has ever seen."

In a separate event, three photos, leaked to Corbell, purportedly from the USS Omaha, show a "spherical" UFO descending into the ocean seamlessly disappearing without destruction. According to Corbell, a submarine unsuccessfully attempted to find the unidentified aerial vehicle.

"This is an extraordinary piece of technology," Corbell said. "Whoever is operating these technologies are far more advanced than anything we have in the U.S. arsenal and that should be a warning sign. We need to find out the intent of the operators of these vehicles."

The Pentagon’s Unidentified Aerial Phenomena Task Force (UAPTF) is now investigating what these unidentified aircrafts are. The UAPTF was formed in the summer of 2020 in an effort to improve the Department of Defense’s "understanding of, and gain insight into, the nature and origins UAPs" particularly those "incursions by unauthorized aircraft into our training ranges or designated airspace." 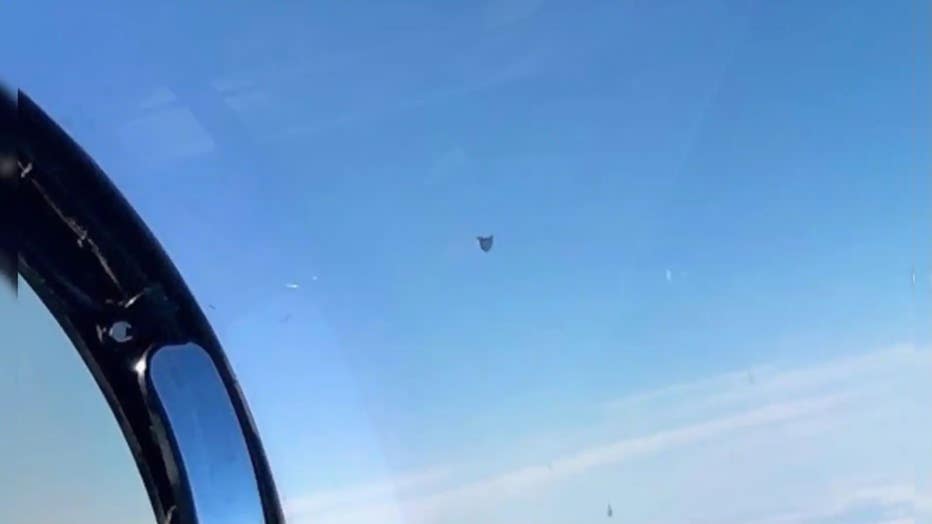 The "ACORN": An FA-18 Pilot and a Weapon Systems Officer took these photos of Unidentifed Aerial Phenomena or UAPs flying over Oceania on March 4th. 2019. (Courtesy: George Knapp/Mysterywire.com.)

The fact that the UAPTF is still investigating these new incidents as unidentified aerial phenomena means they’ve already ruled out that they are balloons or basic drones from another country, Corbell said.

"These craft are not pushing something out the back to go forward," Corbell explained. "They are gravitationally propelled craft that are transmedium — that can go from space to air to sea without destruction."

The Pentagon’s candor and decision to even acknowledge that the video and images of pyramid shaped aircrafts and UFOs over waters near Oceana are in fact real — is exciting UFO enthusiasts and experts worldwide who hope it’s the beginning of more transparency.

This June, the government is expected to release a report on UFOs that former intelligence director John Ratcliffe told Fox News will show that "frankly, there are lot more sightings than have been made public ... things that we are observing that are difficult to explain."

"We are talking about objects that have been seen by Navy and Air Force pilots or have been picked up by satellite imagery that frankly engage in actions that are difficult to explain," Ratcliffe told Fox News, "movements that are hard to replicate, that we don’t have the technology for or traveling at speeds that exceed the sound barrier without a sonic boom."

According to data from the National UFO Reporting Center, sightings of unidentified objects in the air reportedly rose in 2020 by about 1,000 nationwide, to more than 7,200 sightings.

"Generally, we are getting more of what appear to be legitimate sightings of actual UFO’s then was the case even a few years ago," said Peter Davenport, director of the UFO reporting center.

Corbell said he does not know whether the recent images he obtained show UFOs from extraterrestrials visiting our planet, though he is certain the public should demand that our government transparently investigate their origins.

"UFOs are real and they are here, but we don’t know who they are or the intent," Corbell said. "That’s no longer a question. You have just not been paying attention."