ROME — Russian President Vladimir Putin met with Pope Francis for "substantive talks" at the Vatican Thursday, and thanked the pontiff for discussions on a range of topics including Ukraine and the Catholic Church in Russia.

Francis received Putin in an hour-long audience at the Vatican Apostolic Palace. The two addressed "various questions of relevance to the life of the Catholic Church in Russia," the Vatican said in a statement, adding that they also discussed "the ecological question and various themes relating to current international affairs, with particular reference to Syria, Ukraine and Venezuela."

The pair also expressed their satisfaction at the development of bilateral relations during the "cordial discussions," the Vatican said.

"Thank you for the time you have dedicated to me," Putin told Francis.

"It was a very substantive, interesting discussion," he told journalists present at the exchange of gifts in the private papal study. 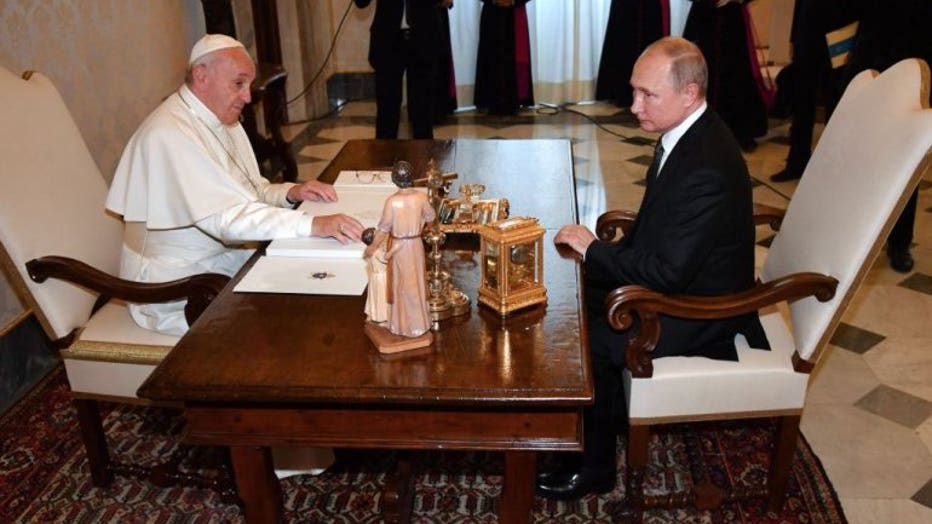 The meeting, part of Putin's one-day visit to Rome, comes a day before Catholic leaders from Ukraine gather at the Holy See to discuss the continuing conflict there and the fallout from the schism between the Russian and Ukrainian Orthodox Churches.

The Vatican said the aim is to lend support "in the delicate situation in which Ukraine finds itself."

Last year, the Orthodox Church of Ukraine formally split from the Russian Orthodox Church in a schism recognized by the spiritual leader of the world's Orthodox Christians. The push for a full-fledged and independent Ukrainian Orthodox Church was bolstered by fighting in eastern Ukraine between government forces and Russia-backed rebels. 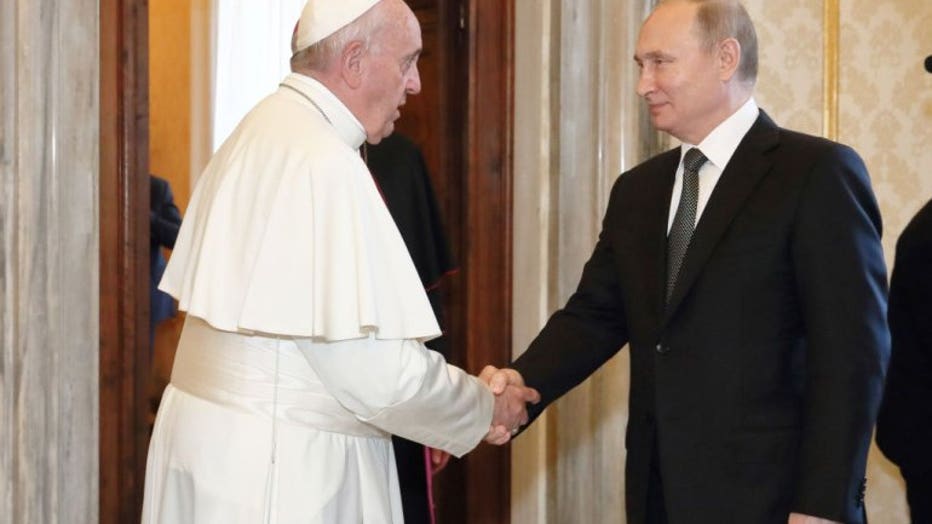 Some observers believe that Putin's visit could be a prelude to a papal visit to Russia. No pope has ever set foot in Russia, but Putin's foreign affairs adviser said the issue wasn't on the agenda for the visit.

Deputy Premier Matteo Salvini, who has made no secret of his admiration for Putin, will attend a dinner with Putin at Villa Madama. The two met face-to-face in Milan during Putin's visit in 2014, in Salvini's role as leader of the then-Northern League.

"The League and its leader Salvini are active supporters of a restoration of full cooperation between Russia and Italy. They have spoken for a quicker abolition of anti-Russia sanctions introduced by the U.S. and EU. Here our points of view are aligned," Putin said.

Putin has acknowledged that U.S. and European Union sanctions have cost Russia an estimated $50 billion since 2014, but he claims that the bloc's nations have suffered even greater damage because of the restrictions.

The Russian president, on his first visit to Italy in four years, said in written responses to Italian daily Il Corriere della Sera that Moscow didn't want to extend countermeasures against EU sanctions to Italy, but that it couldn't react selectively within the World Trade Organization.

Putin said that economic relations with Italy, Russia's fifth-largest trading partner, are expanding despite the sanctions. Italian investments in Russia so far this year have reached $4.7 billion, while Russian investments in Italy in the same period were $2