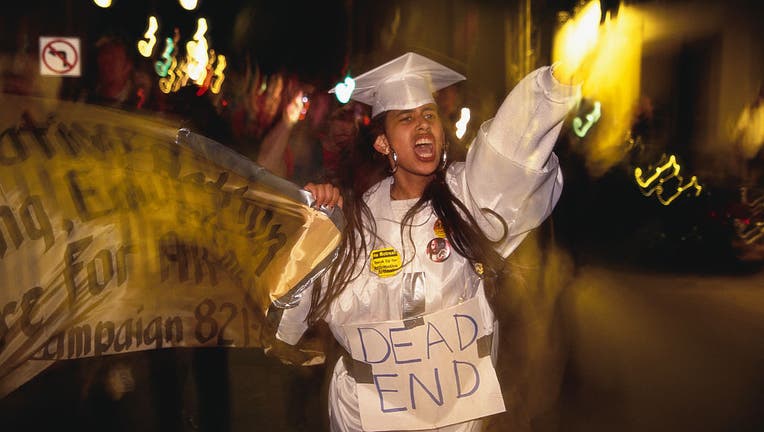 A woman donning a graduation gown protests the University of California board of regents' decision to end affirmative action. (Photo by David Butow/Corbis via Getty Images)

SAN FRANCISCO - California voters have rejected an attempt to reinstate affirmative action programs in public hiring, contracting and college admissions, keeping a 1996 ban on the government granting preferential treatment based on race and gender.

Supporters of Proposition 16 had hoped to overturn the ban amid a national reckoning over racism following the deaths of Black Americans and other people of color by police.

Opponents said the government should treat every person equally, and never use race, ethnicity or gender to promote or discriminate against an individual. T

Before the vote on Tuesday, public polling had indicated that Proposition 16 was struggling, suggesting that voters may not be ready to repeal a quarter-century-old ban on affirmative action in public hiring, contracting and college admissions.

Supporters raised $31 million and included chambers of commerce, tech companies, celebrities such as Rita Moreno and Issa Rae and Democratic leaders. They say affirmative action programs are critical to undoing generations of systemic racism and sexism that holds back people of color and women and ran ads likening opponents to white supremacists.

In contrast, opponents raised $1.6 million, fueled by smaller donations from a grassroots network that includes Chinese immigrants worried that public universities will bypass Asian American applicants with higher scores and grades in favor of lower-scoring African American and Latino students. They say discrimination should stay illegal.

Opponents celebrated via Zoom on Tuesday, cheering their David-versus-Goliath fight as results rolled in. The measure was leading in San Francisco and Los Angeles counties, but failing in other large Southern California counties.

Ward Connerly, the African American businessman who led the 1996 campaign to end affirmative action and to prohibit the state from granting preferences or discriminating against a person due to race or gender, said the campaign was “heartened” by the results.

“The people are saying we want to be treated as equals,” said Connerly, 81.

Supporters did not respond to requests for comment, although they acknowledged before Election Day that the race would be tight. They said they did not have enough time to campaign on what they called a complicated issue.

“I’m Mexican. Yet, I’ve never felt racism,” he said. “If I don’t get a job, it’s because somebody was more qualified.”

In San Francisco, Harry Rochester, who voted for Joe Biden for president, said he was sad when voters banned affirmative action.

“Being an African American man in America, I don’t think I would have gotten as far as I have gotten today if it wasn’t for affirmative action,” said Rochester, 40.

Mark DiCamillo, director of a poll conducted by the Institute of Governmental Studies at the University of California, Berkeley, said he was puzzled by the lack of support for the measure.

The survey of likely voters released Oct. 26 indicated 49% were opposed and 38% were in favor. A poll by the Public Policy Institute of California indicated similar trends.

“My only explanation is that it’s fallen between the cracks,” he said.

Lawmakers placed Proposition 16 on the ballot following the death of George Floyd, a Black man, by Minneapolis police. They pointed to his death as clear evidence of the barriers that hold back Black Americans and other people of color.

California voters banned affirmative action in 1996 through a ballot measure that was pushed by the Republican governor at the time, Pete Wilson. The most populous state in the country is more diverse and less Republican than it was 24 years ago.

Latinos make up 39% of the state’s population, followed by white people at nearly 37%, Asian Americans at almost 17% and African Americans at under 7%. The percentage of Republicans in the state has dropped from 36% in 1996 to 24% now.

The U.S. Supreme Court has long outlawed racial quotas, but it has ruled that universities may use tailored programs to promote diversity.