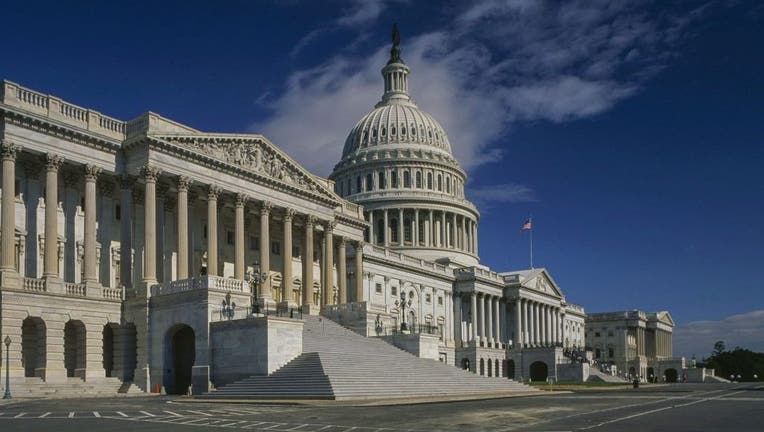 WASHINGTON - An arcane battle over emergency Federal Reserve powers is frustrating efforts to lock down an agreement on an almost $1 trillion COVID-19 economic relief package. Saturday’s impasse is just the latest stumble in a partisan, monthslong fight, and feelings hardened as the Senate congregated for a weekend session.

Lawmakers on both sides said a provision by Sen. Pat Toomey, R-Pa., that would curb emergency Federal Reserve powers was the sticking point. Republicans are insisting on the Toomey plan, while Democrats are adamantly against it. A compromise was proving elusive, and the two sides seem stuck for the time being.

"I think that we should be able to get a deal done," Toomey said afterward.

"I think they agreed to go back and write down what they were saying, so everybody can read it and exchange paper," said Sen. John Cornyn, R-Texas.

The latest pratfall likely upends hopes for a House vote Sunday and quick Senate action on an agreement that’s virtually ready save for Toomey’s provision.

"That has to be resolved. And then everything will fall into place," she said. "It’s a very significant difference."

A new deadline of midnight Sunday for a government shutdown served as a backstop for the tortuous negotiations, which were being conducted in secret largely among the top four leaders in Congress.

Number of Americans applying for unemployment benefits increases to 885,000

Before the coronavirus erupted in March, weekly jobless claims had typically numbered only about 225,000.

Toomey defended his controversial provision in a floor speech, saying the emergency powers were designed to stabilize capital markets at the height of the COVID panic this spring and are expiring at the end of the month anyway. The language would block the Biden administration from restarting them.

Even Toomey said this week that his provision "could be seen as redundant," but neither he nor his Democratic adversaries were backing down from the fight, though compromise language was being shuttled back and forth.

At issue are Fed emergency programs, launched amid the pandemic this spring, that provided loans to small and mid-size businesses and bought state and local government bonds. Those bond purchases have made it easier for those governments to borrow, at a time when their finances are under pressure from job losses and health costs stemming from the pandemic.

Treasury Secretary Steven Mnuchin said last month that those programs, along with two that purchased corporate bonds, would close at the end of the year, prompting an initial objection by the Fed. Under the Dodd-Frank financial reform law passed after the Great Recession, the Fed can only set up emergency programs with the support of the treasury secretary.

But in Mnuchin’s letter closing the programs, he said the Fed could request that future treasury secretaries renew them. Fed Chair Jerome Powell echoed that view Wednesday at a news conference. Yet Toomey’s language would bar the Fed from doing so.

That prompted a rare statement Saturday from former Federal Reserve Chairman Ben Bernanke, who oversaw a dramatic expansion of the Fed’s emergency lending during the Great Recession, which most economists credit with helping end the financial crisis.

It is "vital that the Federal Reserve’s ability to respond promptly to damaging disruptions in credit markets not be circumscribed," Bernanke said. "The relief act should ensure, at least, that the Federal Reserve’s emergency lending authorities, as they stood before the passage of the CARES Act (in March), remain fully intact and available to respond to future crises."

Democrats in Congress also say that Toomey is trying to limit the Fed’s ability to boost the economy, just as Biden takes office.

"This is about existing authorities that the Fed has had for a very long time, to be able to use in an emergency," said Sen. Elizabeth Warren, D-Mass. "It’s about a lending authority for helping small businesses, state government, local government in the middle of a crisis."

Toomey disputed that charge, saying his proposal "is emphatically not a broad overhaul of the Federal Reserve’s emergency lending authority."

"I don’t think this is going to be resolved anytime soon," said Sen. John Kennedy, R-La. "This is now the Republican position."

A new deadline of midnight Sunday for a government shutdown served as a backstop for the tortuous negotiations, which were being conducted in secret largely among the top four leaders in Congress.

A spokesman for Pelosi said she told Democratic colleagues on a Saturday conference call that "we’re right within reach."

The massive package would wrap much of Capitol Hill’s unfinished 2020 business into a take-it-or-leave-it measure that promises to be a foot thick or more. House lawmakers will probably have only a few hours to study it before voting as early as Sunday afternoon. A Senate vote would follow, probably on Monday. One more short-term funding bill probably would be needed to avoid the looming deadline.

An agreement in principle Saturday would be a precursor to more hours of translating compromises into detailed legislation. Lawmakers are eager to exit Washington and close out a tumultuous year.

The $900 billion package comes as the pandemic is delivering its most fearsome surge yet, killing more than 3,000 victims per day and straining the health care system. While vaccines are on the way, most people won’t get them for months. Jobless claims are on the rise.

The emerging agreement would deliver more than $300 billion in aid to businesses and provide the jobless a $300-per-week bonus federal unemployment benefit and renewal of state benefits that would otherwise expire right after Christmas. It includes $600 direct payments to individuals; vaccine distribution funds and money for renters, schools, the Postal Service and people needing food aid.

It would be the first significant legislative response to the pandemic since the landmark CARES Act passed virtually unanimously in March, delivering $1.8 trillion in aid, more generous $600 per week bonus jobless benefits and $1,200 direct payments to individuals.

The new relief aid would be added to a $1.4 trillion governmentwide appropriations bill that would fund agencies through next September. That measure is likely to provide a last $1.4 billion installment for Trump’s U.S.-Mexico border wall as a condition of winning his signature.

For Republicans, the most important COVID-19 aid provision was a long-sought second round of "paycheck protection" payments to especially hard-hit businesses and renewal of soon-to-expire state jobless benefits for the long-term unemployed.

Democrats have been denied direct fiscal relief for states and local governments, and they got a supplemental COVID-19 unemployment benefit that was only half the size of what the CARES Act delivered. Democrats also won $25 billion to help struggling renters with their payments and $45 billion for airlines and transit systems, but some critics on the left said Democratic negotiators were getting outmaneuvered. Biden is pressing for an agreement, fearing a weakening economy will await him on Inauguration Day.

Biden is promising another bill next year, but if Democrats lose Georgia’s Senate runoff elections next month and fail to win the Senate majority, they may have little leverage. GOP leaders say privately that delivering an aid bill may help their incumbent candidates in the January runoffs, GOP Sen. Kelly Loeffler and David Perdue.

Most economists, including Fed chief Powell, strongly support additional economic stimulus as necessary to keep businesses and households afloat through what is widely anticipated to be a tough winter. Many forecast the economy could shrink in the first three months of 2021 without more help. Standard & Poor’s said in a report Tuesday that the economy would be 1.5 percentage points smaller in 2021 without more aid.