The first debate between President Donald Trump and Democratic challenger Joe Biden erupted in contentious exchanges Tuesday night over the coronavirus pandemic, job losses and how the Supreme Court will shape the future of the nation’s health care.

CLEVELAND - President Donald Trump and Democratic challenger Joe Biden faced off Tuesday night in the first of multiple presidential debates, often interrupting each other while sharing different visions for the country amid the coronavirus pandemic, a vacant Supreme Court seat and concerns about racial justice and violence in U.S. cities.

Both candidates hoped the 90-minute debate would energize their base, as well as potentially win over undecided voters in the 2020 race. 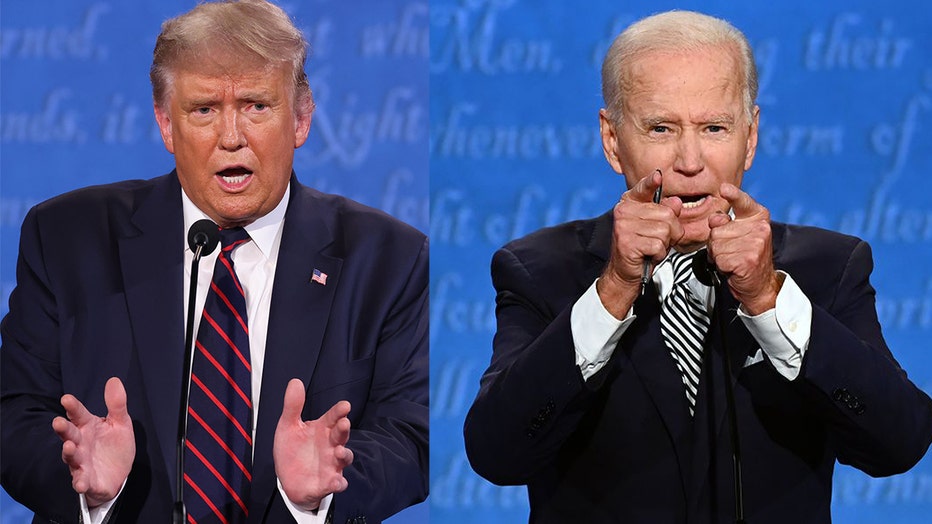 Donald Trump and Joe Biden face off in the first presidential debate of 2020. (Getty Images)

Moderator Chris Wallace, anchor and host of Fox News Sunday, kicked off the debate with a question on the Supreme Court vacancy following the death of the late Justice Ruth Bader Ginsburg. Trump on Saturday nominated Judge Amy Coney Barrett, a federal appellate judge and someone who has established herself as a reliable conservative on several legal issues.

Ginsburg’s death set off a battle over whether her seat should be filled so close to the Nov. 3 election. Senate Republicans are readying for confirmation hearings in two weeks, with a vote in the full chamber now expected before Election Day.

“I think she will be outstanding,” Trump said of Barrett. “I think she’s going to be as good as anybody who has served on that court. I really feel that.”

Biden argued that a Supreme Court nomination should be decided by the winner of the election.

Trump decried Democrats’ calls to delay a nominee. “We won the election and therefore we have the right to choose her and very few people knowingly would say otherwise,” he said. “And by the way, the Democrats, they wouldn’t even think about not doing it.”

Biden tied the Supreme Court nomination into the Affordable Care Act — saying Barrett would pose a threat to health care.

“She seems like a very fine person. But she’s written before she went on the bench, which is her right, that she thinks the Affordable Care Act is not constitutional,” Biden added.

When the conversation led to a discussion on health care, Wallace pressed Trump on his plan to replace the Affordable Care Act.

“I got rid of the individual mandate,” Trump said in a heated back-and-forth with Wallace.

Trump also criticized Biden over his refusal to say whether he opposes mounting calls from some lawmakers and progressive activists to add members to the Supreme Court in retaliation if Barrett is confirmed.

COVID-19 and the economy

Biden, who has been leading in polls narrowly in some battleground states, is looking to win over more suburban voters, women and seniors. Biden’s campaign views the debate as an opportunity to criticize Trump’s handling of the COVID-19 pandemic, which has killed more than 200,000 people in the U.S. and left millions jobless.

While recent polling has found an advantage for Trump when it comes to the economy, more Americans have said they disapprove of his leadership during the crisis.

“It is what it is, because you are who you are,” Biden said. “The president has no plan. He hasn’t laid out anything. He knew all the way back in February how serious this crisis was.”

Trump countered Biden during the debate, stating if he “would have listened to (Biden), millions of people would have died.”

The candidates also clashed on reopening the economy amid the ongoing pandemic. Biden called for increased testing prior to reopenings and said he supports more funding to deal with the impacts of COVID-19.

"He wants to shut down this country and I want to keep it open," Trump said.

On the economy, which has been a focus of Trump’s reelection efforts, the president said his administration “built the greatest economy in history.”

“When the China plague came in, we closed it down,” Trump added.

Biden dug in on the country’s current record unemployment, saying Trump will be “the first president in the history of the United States to have fewer jobs when he leaves office than when he came in."

"You can't fix the economy until you fix the COVID crisis," Biden said.

In a strategic move, the former vice president released his 2019 tax returns just hours before the debate, showing that he and his wife, Jill, paid almost $300,000 in federal taxes in 2019, including almost $288,000 in personal income tax.

President Donald Trump his asked about a recent report involving his tax returns.

Wallace asked Trump directly about the report, to which he responded: “I've paid millions of dollars in taxes.”

Trump broke with a decades-old precedent by not releasing his returns as a presidential candidate in 2016 or since being in the White House. Biden had already released two decades' worth of his tax returns, in addition to the federal financial disclosures required of him when he was a senator and vice president.

During the exchange over Trump’s taxes, Biden echoed calls for the president to publicly share the information. Trump has claimed that he can't release his returns because his taxes have been under audit by the Internal Revenue Service.

"You'll see it as soon as it's finished," Trump replied.

The first presidential debate came while many Americans are concerned about racial injustice, as well as protest violence that has erupted in some U.S. cities, following many publicized killings of Black people by police.

Trump and Biden speak on race in America

“It’s about equity and equality,” Biden said in response to Wallace’s question about the issue of race over the next four years.

“It’s about decency. It’s about the Constitution. And we have never walked away from trying to require equity for everyone, equality for the whole of America,” the former vice president added.

On the general question of race, Trump pivoted to law and order in America.

"I have the support of just about every law enforcement agency in the country," Trump said. “The people of this country want and demand law and order, and you’re afraid to even say it.”

Trump added that Biden’s work on a federal crime bill in 1994 treated the African American population “about as bad as anybody in this country.”

Trump and Biden on law and order

Donald Trump and Joe Biden debate the recent protests that have rocked the nation.

When asked by Wallace if he was willing to condemn White supremacists and militia groups “and say that they need to stand down and not add to the violence in a number of big cities,” Trump responded by saying that “everything I’ve seen is from the left wing, not from the right wing.”

When pressed further by Wallace, Trump attempted to sidestep the question.

“What do you want to call them? Give me a name. Give me a name,” Trump said, before Wallace mentioned the far-right, violent group known as the Proud Boys.

The president responded: “Proud Boys, stand back, stand by, but I’ll tell you what, somebody’s got to do something about Antifa and the left because this is not right-wing problem. This is a left-wing problem.”

During the debate, the candidates traded jabs at each other’s families. Trump brought up past claims about Biden’s son, Hunter, working overseas, alleging that he received $3.5 million from Russian billionaire Yelena Baturina, who was married to the late Moscow mayor. A statement from Hunter Biden’s lawyer called the allegations false.

“None of that is true,” Biden said. “His family, we could talk all night.”

Throughout the chaotic 90-minute debate, the candidates frequently talked over each other. At one point, Biden called the president “a clown” and told him to “keep yapping.”

“You are the worst president America has ever had,” Biden said.

In an attempt to prevent Trump and Biden from interrupting the other, Wallace said: “Gentlemen, I hate to raise my voice, but why should I be any different than the two of you?"

On the issue of climate change, Trump said in the next four years he wants “crystal clean water and air,” and said the U.S. now has “the lowest carbon” emissions.

“If you look at our numbers right now, we are doing phenomenally,” he said.

During his first four years, Trump notably withdrew the U.S. from the Paris Climate Accord, an agreement within the United Nations Framework Convention on Climate Change to strengthen the global response to the threat. Biden said he would rejoin the agreement if elected.

Trump and Biden on climate change

Donald Trump and Joe Biden go head to head on the issue of climate change and the raging fires impacting the West Coast.

When asked if he believes human pollution contributes to the warming of the planet, Trump said, “I think a lot of things do. But I think to an extent, yes."

“As far as the fires are concerned, you need forest management,” he added, regarding wildfires raging in California and other Western states.

Biden said it would be possible to create “thousands and thousands of jobs” while converting to clean energy.

An influx of mail-in voting is anticipated for the November election due to the ongoing coronavirus pandemic, with early voting having already begun in some states. Biden and Trump clashed on the integrity of mail-in ballots during the debate.

Trump repeated claims of fraud that he’s made in the months leading up to Election Day. Top election officials have disputed those claims, saying there is no evidence that mail voting leads to widespread voter fraud.

“As far as ballots are concerned. It’s a disaster,” Trump said. “This is going to be fraud like you’ve never seen.”

"There is no evidence at all that mail-in ballots are a source of being manipulated and cheating," Biden countered, calling on Americans to “show up and vote.”

Wallace ended the debate by asking each candidate whether they would pledge to not declare victory until the election has been independently certified.

"I'm urging my supporters to go into the polls and watch very carefully," Trump said, noting that "if it's a fair election," he will be "100% on board."

“But if I see tens of thousands of ballots being manipulated, I can’t go along with that,” Trump added.

Biden and Trump on election integrity

Taking place at Case Western Reserve University and Cleveland Clinic in Cleveland, Ohio, Tuesday was the first of three presidential debates that will be held over the next month. The other two are slated for Oct. 15 and Oct. 22.

Mike Pence and Kamala Harris will take part in the vice presidential debate on Oct 7.