LANGLEY, Va. — President Donald Trump praised new CIA Director Gina Haspel at her swearing-in ceremony Monday, saying there was "no one in this country better qualified" for the job.

Striking a different tone than in his previous visit to the Central Intelligence Agency headquarters in Northern Virginia, President Trump hailed the agency staffers, calling them the "most elite intelligence professionals on the planet" and promised them the "the tools, the resources and the support they need." 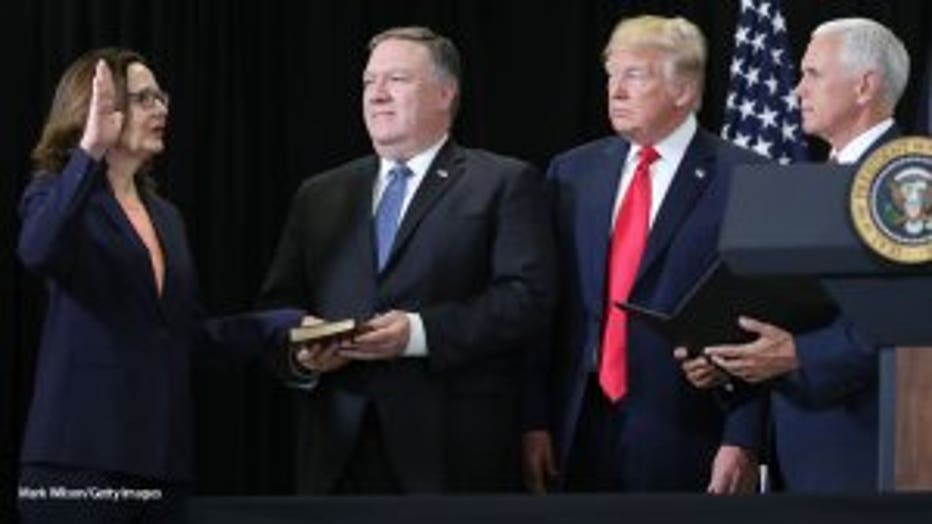 LANGLEY, VA - MAY 21: Gina Haspel (L) is sworn in as CIA director with U.S. Secretary of State Mike Pompeo (2nd-L), President Donald Trump (2nd-R), and Vice President Mike Pence (R) during a swearing-in ceremony at agency headquarters, May 21, 2018 i

The Senate confirmed Haspel last week after overcoming concerns about her role in the agency's use of harsh interrogation techniques after 9/11. President Trump said she showed courage during the process in the face of "very negative politics."

Haspel said she took pride in being the first woman to lead the agency, adding: "I stand on the shoulders of heroines who never sought public acclaim, but served as inspirations to the generations that came after them."

Haspel said she wants to send more officers into the field, improve foreign language proficiency among the ranks and strengthen the agency's working relationships with intelligence agencies in partner nations.

When President Trump last visited the CIA headquarters in 2017, he spent much of his remarks at the time focused on settling scores with the media. Last year President Trump made those comments in front of a wall in the headquarters marked with stars that represented fallen CIA officers. This year, he paid tribute to the lost lives, saying "their stories of service and sacrifice and daring will live for all time."

Hours before President Trump visited CIA headquarters, he struck a different tone, promoting criticism of former CIA Director John Brennan and suggesting Brennan is to blame for the Russia probe.

Brennan became the agency's director in 2013 under President Barack Obama and served until January 2017. He has been a vocal critic of President Trump.