PITTSBURGH — President Donald Trump and first lady Melania Trump paid solemn tribute Tuesday to each of the 11 people slain in the worst instance of anti-Semitic violence in American history. As the president and first lady placed their remembrances outside the Tree of Life synagogue, protesters nearby shouted that the president was not welcome.

The president and first lady first went inside the vestibule of the synagogue, where they lit candles for each victim before stepping outside. It was a marker of the political divisions roiling the nation in the aftermath of the Sabbath shooting that shouts of "Words matter!" and "Trump, go home!" could be heard from demonstrators gathered not far from where a gunman had opened fire on Saturday. 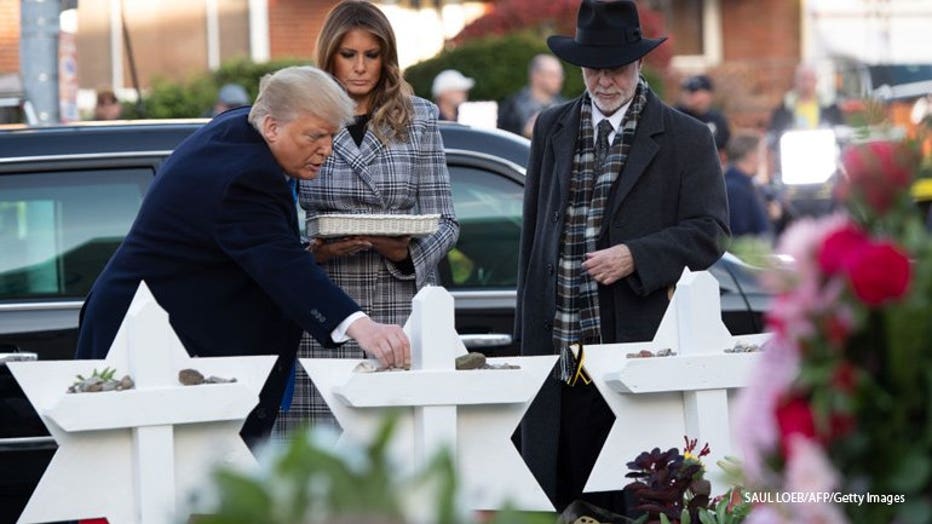 US President Donald Trump and First Lady Melania Trump, alongside Rabbi Jeffrey Myers, place stones and flowers on a memorial as they pay their respects at the Tree of Life Synagogue in Pittsburgh, Pennsylvania, October 30, 2018. - Scores of proteste

Rabbi Jeffrey Myers, who had been conducting services when the shots rang out, led the first couple outside and gestured at white Jewish stars posted for each victim. At each, the president placed a stone, a Jewish burial tradition, while the first lady added a flower. They were trailed by first daughter Ivanka Trump and son-in-law, Jared Kushner, who are Jewish.

President Trump stepped into the role of national consoler, a title he wears uncomfortably, as he arrived in Squirrel Hill, the neighborhood where he faced an uneasy welcome. Flowers, candles and chalk drawings filled the nearby corner, including a small rock painted with the number "6,000,011," adding the victims this week to the estimated number of Jews killed in the Holocaust. 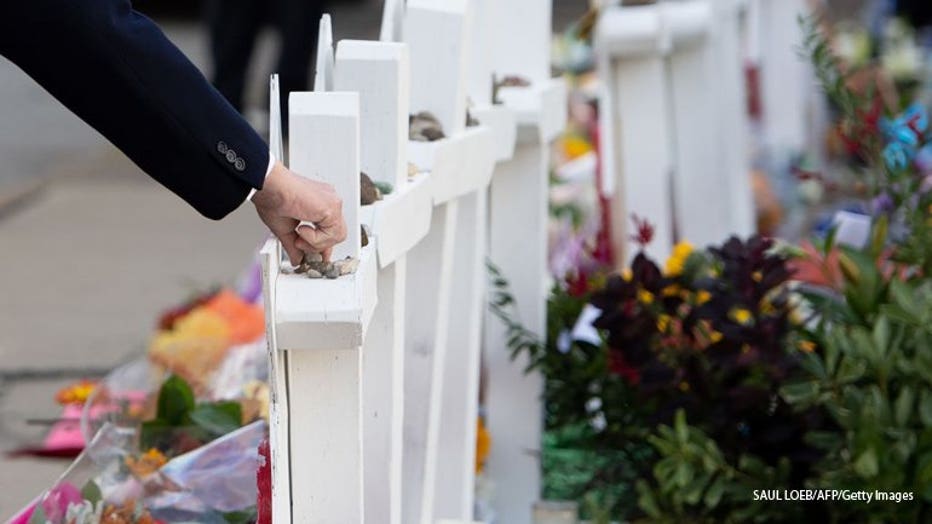 US President Donald Trump places a stone on a memorial as they pay their respects at the Tree of Life Synagogue following last weekend's shooting in Pittsburgh, Pennsylvania, October 30, 2018. - Scores of protesters took to the streets of Pittsburgh

Squirrel Hill resident Paul Carberry, 55, said President Trump should not have visited until the dead were buried, and he decried the president's divisive rhetoric.

"He didn't pull the trigger, but his verbiage and actions don't help," Carberry said. Hundreds of protesters assembled to show their displeasure with President Trump's presence.

When Air Force One touched down at the airport outside Pittsburgh, the president and first lady were not greeted by the usual phalanx of local officials that typically welcomes a visiting president, a reflection of controversy surrounding the visit. 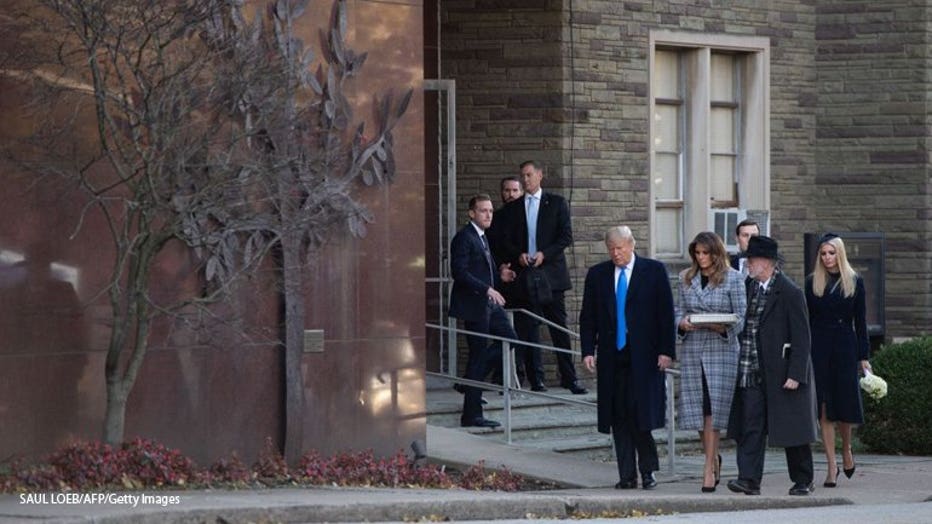 Local and religious leaders were divided on whether President Trump should have come.

Pittsburgh Mayor Bill Peduto, a Democrat, told reporters before the visit was announced that the White House ought to consult with the families of the victims about their preferences and asked that the president not come during a funeral. Neither he nor Democratic Gov. Tom Wolf planned to appear with President Trump.

As his motorcade wound through downtown Pittsburgh, some onlookers saluted the president with upraised middle fingers and others with downturned thumbs.

The White House invited the top four congressional leaders to join President Trump in Pennsylvania, but none accompanied him.

A spokesman for Republican Senate Majority Leader Mitch McConnell said he already had events in his home state of Kentucky, pushing back on the suggestion that he declined. Republican House Speaker Paul Ryan's office said he could not attend on short notice. Democratic Senate Minority Leader Chuck Schumer and Democratic House Minority Leader Nancy Pelosi also opted not to participate.

Questions have long swirled about the president's credibility as a unifier. Since his 2016 Republican campaign for the White House, President Trump has at times been slow to denounce white nationalists, neo-Nazis and other hate-filled individuals and groups that found common cause with his nationalistic political rhetoric.

President Trump traveled to the historic hub of the city's Jewish community as the first funerals were held for the victims, who range in age from 54 to 97. The dead include a set of brothers, a husband and wife, professors, dentists and a physician. It was not immediately clear whether President Trump would meet with any family members.

Those who live in the tight-knit community were uncertain about whether they wanted the presidential visit. To Marianne Novy, President Trump wasn't wanted "unless he really changes his ways." For David Dvir, politics should take a pause for grief: "It's our president, and we need to welcome him."

Barry Werber, 76, who said he survived the massacre by hiding in a dark storage closet as the gunman rampaged through the building, said he hoped President Trump wouldn't visit, noting that the president has embraced the politically fraught label of "nationalist." Werber said the Nazis were nationalists.

"It's part of his program to instigate his base," Werber said, and "bigots are coming out of the woodwork."

Novy, 73, a retired college English professor, said she signed an open letter asking President Trump not to come to Pittsburgh. "His language has encouraged hatred and fear of immigrants, which is part of the reason why these people were killed," she said.

Just minutes before the synagogue attack, the shooter apparently used social media to rage against HIAS, a Jewish organization that resettles refugees under contract with the U.S. government.

Dvir, 52, the owner of Murray Avenue Locksmith in Squirrel Hill, said of President Trump: "I think he made some mistakes, but he is a great president." He added that it would be "a shame" if the community protested the president's visit.

Asked Monday if President Trump had done enough to condemn white nationalism, White House press secretary Sarah Huckabee Sanders said the president "has denounced racism, hatred and bigotry in all forms on a number of occasions."

Beth Melena, campaign spokeswoman for Wolf, said the governor did not plan to return to Pittsburgh as part of President Trump's visit on Tuesday. She said he based his decision on input from the victims' families, who told him they did not want the president to be there on the day their loved ones were being buried.

"Community leaders expressed to the governor that they did not feel it was appropriate for Trump to come, so the governor made a decision not to join him on his visit out of respect for the families and the community," Melena said. 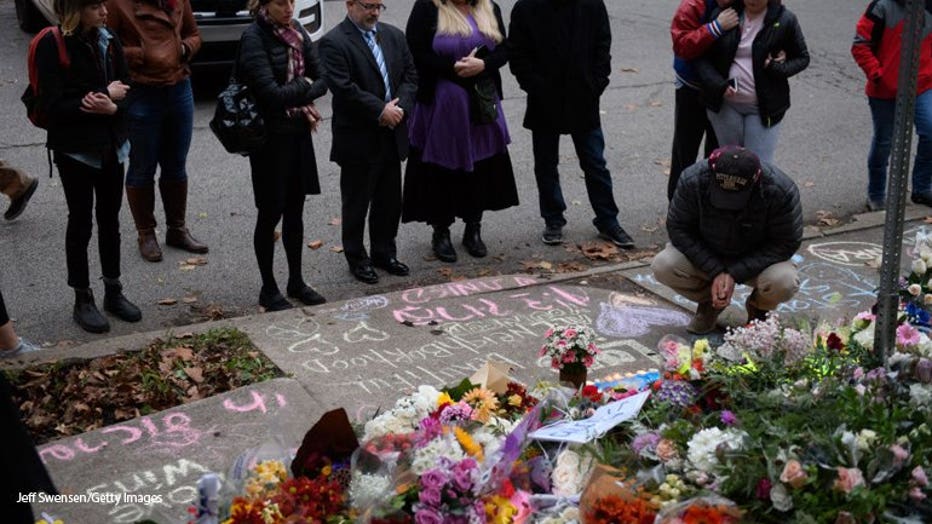 PITTSBURGH, PA - OCTOBER 29: People pause in front of at a memorial for victims of the mass shooting that killed 11 people and wounded 6 at the Tree Of Life Synagogue on October 29, 2018 in Pittsburgh, Pennsylvania. Eleven people were killed and six